Every card has a story.  Whether or not it's a 1988 Donruss Alfredo Griffin that was pulled from a pack last year and thrown into a box that was eventually tossed into a dumpster or the 1975 Topps Robin Yount Mini I purchased when I was a kid that will stay with me until I draw my last breathe.

Today I'll be telling five short stories about some cards that were sent to me earlier in the week by Steve over at 1975baseballcards.  He sent me a care package that included a note that broke down the reasons he sent me specific cards.  The note was so impressive, I felt that some of it needed to be shared with you.

I started collecting San Jose Giants minor league sets a few years ago.  I don't own any San Jose Bees cards yet, but this card will make a nice place holder until I do.

By the way, did you know that the Baseball Hall of Fame has a series of articles titled Card Corner that feature interesting stories behind baseball cards?  I didn't... until Steve pointed out to me that this card was featured here.

When I first saw this card, I had no idea why he included it in the care package.  But his letter mentions that this is one of the 1991 Topps Glow Backs.  I've known about these for awhile, but never checked to see if I owned any.

Last night, I tried to turn my iPhone into a UV light, but ultimately failed.  I'll just have to take Steve's word. 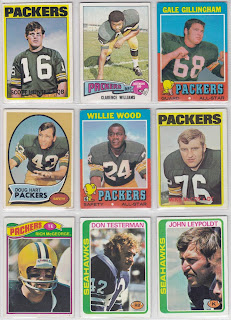 There was a nice stack of vintage Green Bay Packers, along with a pair of 1978 Seattle Seahawks, and a lone 1974-75 Topps Don Lever.  All of these were part of Steve's childhood collection, which is really cool.

If I could go back to 2001 when I sold off the bulk of my collection, I would have set aside more cards from my childhood.  Monetary value isn't everything.

These 5x7 cards were originally available online as sets.  If I remember correctly, the sets were broken down by player and would contain reprints of their regular issue base cards.  I purchased three sets:  Rickey Henderson, Tony Gwynn, and Brett Favre.

Steve has been putting together a master set of all of the different players who has a 1975 Topps card.  The only one he's missing is a Nolan Ryan.  Anyone have one available?

Much like the Hernandez and Valle, I was scratching my head a little trying to figure out how this card fit into my collection.  Eventually, I gave up and turned to the note.

This is actually a "two in one" card.  Steve knows I collect left-handed hall of famers and damaged cards.  Most people send me A's and Padres cards, so I completely forgot about the whole "left-handed" thing.

As for the card being damaged... well you have to look very closely at one of the corners on the back to see any damage.  Sorry Steve.  This one doesn't make it into the Damaged Card PC binder.  I did add it to the left-handed hall of famers collection though.

Before I wrap things up, I wanted to share a few more things Steve sent...

Steve asked if this would fit into my Prime Number PC.  Unfortunately it doesn't.  That's reserved for "first in the run", "last in the run", and "jersey numbers".  However, it's a pretty awesome addition to my Oakland Athletics collection.

He also included these two stamps:

These are awesome!  If you're wondering why these were included in the package... I'm a lifelong Californian... and my parents were born and raised in Hawaii.

Thank you Steve for all of these wonderful hand chosen items!  I really had a lot of fun reading your letter and trying to figure out the significance of certain cards.  Don't really have a need for those Pro Set hockey cards, so I'll make sure to pass them along to Night Owl.

Oh wait... I almost forgot.  There was one more card that Steve sent that I wanted to share... 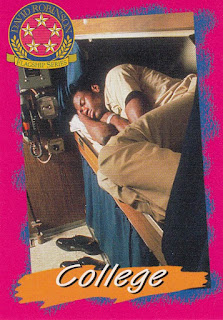 This card really stumped me, since I haven't collected basketball cards for a few years and David Robinson really doesn't fit into any of my team or player collections.  So, what's the story?  Well... Steve has started a new blog called... Athletes With Phones.  It's a blog that centers around trading cards with phones.  If you have a few moments, I encourage you to head over and check it out.

Well that's it for today.  Happy Saturday and sayonara!
Posted by Fuji at 3:00 PM