The Oakland A's are currently one of the hottest teams in baseball.  Lol.  It's hard to even type those words without chuckling... but it's true.  They're 9-2 in their last 11 games and have outscored opponents 64 to 34 over that period of time.

I'm sure it's not going to last, but I wanted to give them some props before they start to free-fall back into oblivion.

While I'm on the subject of my favorite sports franchise, Collecting Cutch sent me a nice care package that included my very first autograph of the Athletics' top prospect: 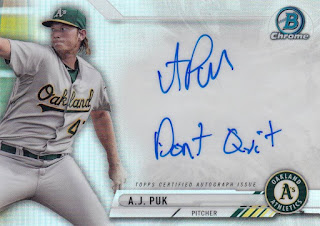 After paying good money for Sonny Gray signatures, I've learned my lesson about investing money in Oakland Athletics prospects.  However that doesn't mean that I can't appreciate this awesome card.  Just look at that sweet "Don't Quit" inscription.

Puk was forced to undergo Tommy John surgery earlier in the month and isn't expected back for at least a year... maybe longer.

Many A's fans were hoping to see whether or not he'd eventually be called up this season.  Oh well... at least we have one pitcher who's been pretty entertaining this season.  Sean Manaea has been on a roll as of late.  He no-hit the Boston Red Sox last weekend... and last night he held the Houston Astros hitless through the first three innings. 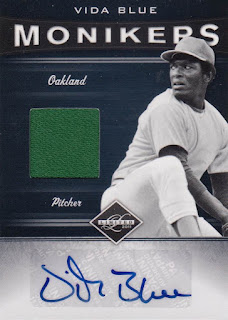 Blue is the only pitcher in franchise history to throw more than one no-hitter while representing the Oakland Athletics.

In addition to these two autographs, he also sent me this Topps online only card of Rickey Henderson:

I hadn't heard or seen this card before, but after doing a little homework, I found out that there were only 592 of these produced.  This card honors The Man of Steal for being MLB's all-time stolen base leader... as well as being the all-time leader in runs scored.

Rounded out Collecting Cutch's package was a stack of cards for a variety of collections: 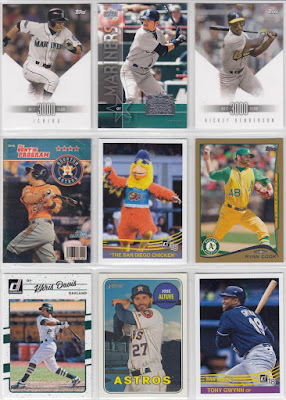 Thank you Brian for this very generous care package!  I'm not sure what I'm suppose to get for the guy who has 99% of the Andrew McCutchen cards in existence.  But don't worry... I'll get some Pirates together.  Worst case scenario, you can share them other Pirates collectors.