I've been meaning to go out to the flea market, but it's been one of those things where my schedule never lines up... and when it has... Mother Nature has intervened.

Luckily things worked out perfectly last Thursday when my buddy and I scheduled a busy day that involved walking around my first flea market in months, then picking up supplies at the wholesaler, and finally wrapping things up at the Oakland Coliseum to watch the A's take on the Texas Rangers.

I've learned over the years that Thursday is the best day to walk around the Capitol Flea Market.  It tends to have a slightly smaller crowd than on Sundays, but you'll often find more sports memorabilia dealers.

Sadly that wasn't the case this time.  There were only three or four guys with baseball cards.  Most of the stuff was your typical junk wax I try to avoid, but I did manage to buy one thing... 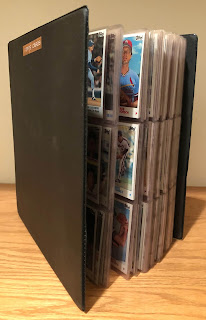 As we were walking down the 2nd to last row, I found a guy who had this binder of cards and a shoebox filled with cards.  I wasn't interested in the shoebox, because the cards were a mix of late 80's/early 90's junk that hadn't been stored properly.

On the other hand, I was definitely interested in the binder.  Inside was a 1984 Topps baseball starter set: 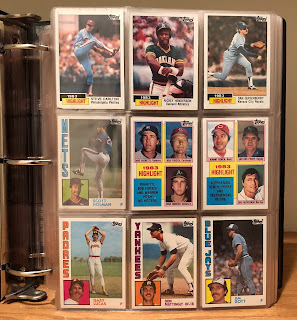 I actually already own this set, but I'm pretty sure that I have a stack of base cards sitting in a box somewhere.  I figured I'd try to build myself a second set if the price was right.

The guy wanted $10 for the box and binder.  I offered him $5 for the binder.  He said "no"  I started walking away.  Ten feet later, he changed his mind and accepted my offer.

This will be one of those future rainy day projects when I have a few hours to kill.  In the meantime, I pulled out the sharp looking Mattingly rookie card and added it to my 80's rookie card collection.

After the flea market we stopped off at GTS Distribution to pick up some supplies: 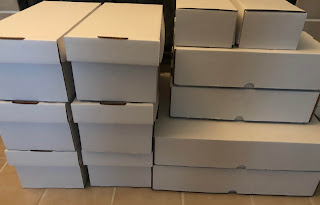 Usually, I'll at least inquire about their current Topps products, but ultimately I decided to save my money for individual cards on eBay and COMC.

It's a good thing I didn't buy any wax boxes, because when we got to the Coliseum I discovered that they charge $30 for parking now.  $30 for parking?  That's insane!

That was almost as expensive as the price of the tickets themselves.  Speaking of the tickets, my buddy Mike picked up the tab and bought me my nachos and a soft pretzel: 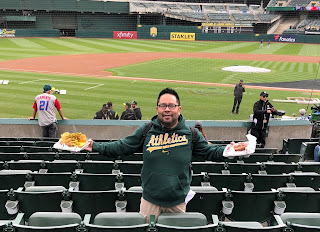 In return, I drove, paid for parking, and bought him dinner.  It's one of those trades where both parties walked away happy.

We had a really great view of the ballpark from our seats: 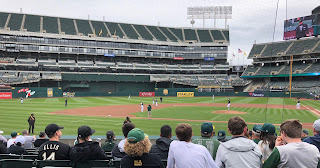 It's just a shame that there were hardly any fans there.  Although they announced that there were 10,132 fans in attendance... it was probably more along the lines of six or seven thousand.

The outcome wasn't any better.  After a rough 2nd inning and a 2-run home run by Shin-Soo Choo in the 9th, the A's lost to the Rangers 6-3.

But I'm not complaining.  Anytime you can start off the day by finding a 1984 Topps starter set for $5 at the flea market and spend the afternoon at the Oakland Coliseum chomping down on nachos while watching your favorite team play... it's a pretty good day.


Do you have any go-to foods you eat when you go to the ballpark?