Albert Einstein once said that "the definition of insanity is doing the same thing over and over again and expecting different results".

If he's right... then I must be insane, because every year I buy a handful of blaster boxes... and every year I tell myself I'd be better off spending my hard earned money over at COMC or eBay.

Last weekend, while visiting my parents in Vegas, I found a bunch of 2018 Heritage blasters at Target.  The Targets in my area never have any, so I got a little excited and decided to add one to the shopping cart. 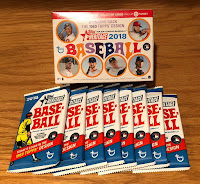 When we checked out, I was surprised to see that they were on sale for $16.99.  I almost ran back and grabbed more, but didn't want to keep my parents waiting.

I've already seen a fair share of 2018 Heritage on many of your blogs, so in the back of my mind... I was secretly hoping to pull a few World Series and All-Star subset cards.

Plus I wasn't going to cry if I ended up pulling a Real One autograph or Clubhouse Collection relic.

Most of the stuff I pulled from this box will be sent out to people I owe, however I figured I'd show off five cards that caught my attention.  And to convince myself that I'm not insane... I decide to review them closely and learn at least one thing from each card.

So open your notebooks, grab a pen, and hopefully you'll be able to learn something new from these cards too... 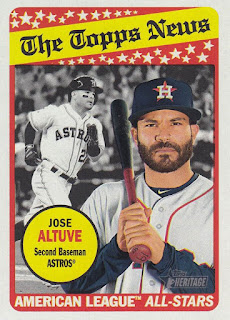 What did I learn from this card?  Well... I already knew that this is one of the coolest subsets in recent years.  But what I didn't know is that Altuve is holding some other guy's bat in this photo.  At least I think he is.

What did I learn from this card?  Carlos was once offered a small part in a movie about Roberto Clemente, who happens to be one of his heroes.

What did I learn from this card?  Clayton Kershaw, Sandy Koufax, and Christy Mathewson are the only National League pitchers to win five ERA titles.

What did I learn from this card?  I learned that this piece of fabric was not from any specific game, event, or season.  Just kidding.  I've known about Topps and their lame COA's for years.  I was still pretty happy to pull this card of the 2017 World Series MVP.

What did I learn from this card?  Hmm... let's see.  I knew Judge was a big guy who played for the New York Yankees.  I knew he was from California.  Sadly... there's not much information on the back of this card.  I guess I learned that Topps wasted a lot of space on these bright yellow inserts.

Dang... it's been awhile since I've taken time to sit down and learn things from baseball cards.

Let's keep this cardboard classroom in session and take a look at the five cards I received yesterday from Jim over at Cards As I See Them:

What did I learn from this card?  I learned that Vida Blue was the first pitcher to start an All-Star game for both leagues.

By the way... I've never seen or heard of this set before.  Great action shot of Mr. Blue.

What did I learn from this card?  I learned that Darvish retired the first twenty-six batters in his first start of the 2013 season.  Actually... I'm pretty sure I watched the last few innings of that game.  But I didn't realize that no pitcher has ever recorded more consecutive outs in their first start of a season than him.

What did I learn from this card?  Actually... I didn't learn anything specifically from this card of note. However some information on this card inspired me to do some detective work.  Jim pointed out that this card represents a game that took place between the Seattle Mariners and the Oakland Athletics on March 25th, 2003 in Japan.

Unfortunately... the game never took place.  Due to the threat of war in Iraq, Bud Selig didn't allow the two teams to travel to Japan.  They eventually faced each other a week later at the Oakland Coliseum on April 1st, where the A's shutout the Mariners 5-0.  Ichiro went 0 for 4 that day.

What did I learn from this card?  Hmmm.  Well since I already knew that you should not bring toy guns that look like a real gun to public places, I guess I'll go with this fun fact.  Kurt Suzuki wants to go to Italy, so he can eat pasta.

What did I learn from this card?  There wasn't exactly a plethora of information on the backs of these Mother's Cookies trading cards.  But I did learn that Sutton arrived from the Brewers on the 43rd anniversary of the Japanese bombing of Pearl Harbor.  If that's a bit too macabre, it looks like Sutton just celebrated his 73rd birthday on Monday.

Well that's it for today's cardboard lesson.  I hope that I was able to prove to all of you that I'm not insane... and that you were able to learn something new from the baseball cards in this post.

If not... go grab a stack of your baseball cards of your own and start reading.

Jim... thank you for the generous PWE filled with all of this interesting information and new cards for my collection.  I promise to hit you back with some Dodgers for your collection.

I hope all of you are enjoying your weekend.

Happy Saturday and sayonara!
Posted by Fuji at 3:15 PM