Imagine digging through some old boxes of cards and stumbling across cards worth hundreds of dollars.  That's exactly what happened to me last year...

While digging through some of my lower end rookie card boxes, I discovered a 2008-09 Topps Chrome rookie card refractor of Russell Westbrook.  I immediately knew it was worth something, but had no idea that they were selling upwards of $250.

That discovery motivated me to look through my higher end stuff stored at my parent's house.  I wasn't really surprised to find a bunch of cards that fetch anywhere from $5 to $50.  There was actually a time when I was really into collecting basketball cards. 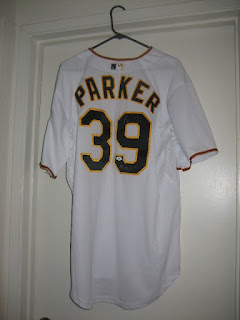 Now I realize that most of my readers are baseball fans.  Don't worry.  I won't be turning this into a basketball card blog anytime soon.  In fact... if you're patient, I've included a nice piece of baseball buried treasure for all of you at the end of this post.

With that being said... basketball is very popular all around the world... so there's a huge market for their memorabilia.

Today I'm going to show off seven examples of basketball cards that represent some of the most valuable cards in my sports card collection.

And maybe... just maybe... even some of the baseball card collectors who read this blog will be able to appreciate these basketball cards.  Are you ready?  Here we go...

Let's kick things off with some rare Air...

Michael Jordan inserts have been popular for decades... especially the rare ones.  This acetate insert is truly a beautiful card.

The first thirteen cards of the 1998/99 Black Diamond set were Michael Jordan cards.  If you're familiar with this product, then you know that each card had three parallels.  The Quad Diamonds are the rarest.

There's a pretty big price range in regards to completed listings on raw copies, but I definitely call the $50 sale an outlier.

This card is sort of a mystery to me, because they weren't exactly tough pulls.  It's definitely a beautiful card, but there's no way that justifies the prices collectors are paying for these.  Maybe 1998/99 Metal Universe were printed in short supply or something.

This card is the other mystery card.  Not in regards to rarity.  With 15 cards in the set, the odds of pulling Mr. Jordan are 1:2880 packs, which is one per four cases.

No, the mystery has to do with putting a value on this card.  There's only one raw copy currently up on eBay and the vendor is asking $800 (or best offer).  I'm very curious to see what this card ends up selling for.

There are only five copies of this card in existence... and none have popped up recently.  However... the standard RPM #'d to 499 sold for $125.95 back on March 18th.  I think it's safe to say that this card is worth more than that.

This card is the cheapest card in this post, but I included it because I built this set and I know exactly how difficult it was to acquire this card.  Out of the 85 card set, there are only five cards #'d to less than 200 and Westbrook is one of them.

I've saved the best for last.  This is hands down my favorite card out of the seven featured in this post.   I've always enjoyed the way #21 played the game.  He was quiet, yet affective.  And when I stumbled across this autograph, I was pretty stoked to find it.

Duncan hasn't signed for a lot of products over the years... and unfortunately none of these have popped up recently on eBay lately.  However similar Topps cards have sold anywhere from $291.78 to $425 on eBay.

What am I planning on doing with these seven cards?  Well... the Jordans are part of my Jordan PC and probably won't be going anywhere anytime soon.  The Duncan will go into my basketball hall of fame autograph collection.

As for the Harden and Westbrook... I'll probably throw them up on eBay eventually.  Although... I'm planning on sending in some cards into PSA to get graded, so they might be part of that submission.  Or who knows... maybe I bring them back down to Vegas in a few weeks and rebury them.

By they way... if you're a baseball fan and you've stuck around this long, here's the baseball buried treasure I promised... 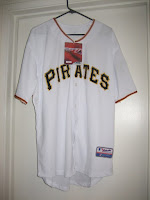 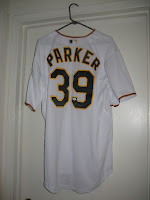 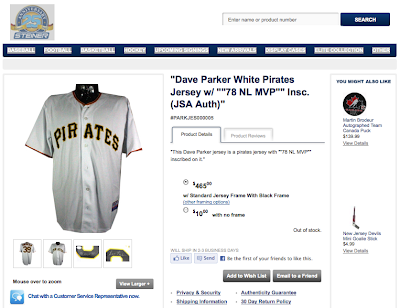 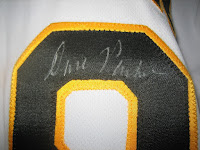 I probably should have this jersey framed and displayed somewhere... but sadly this piece of baseball memorabilia is buried somewhere.  My office?  My buddy's garage?  My parent's home?  Who knows... I'm sure I'll dig it up eventually.


Ever dig through your collection and discover some buried treasure?


Happy Sunday and sayonara!
Posted by Fuji at 3:00 PM