A few weeks ago, David Schoenfield updated a previous article he had written about the best regular season pitching performances for all thirty MLB teams.  He picked Bobby Witt's one-hitter against the Kansas City Royals back on June 23rd, 1994 to represent the Oakland Athletics.  He also mentioned Sean Manaea's 2018 no-hitter, which led me to researching all of the no-hitters in Oakland Athletics history.

For the baseball trivia enthusiasts... there have been thirteen in franchise history... eight of which took place during their tenure in Oakland.  The autograph collector in me decided start a new project and collect one certified pack pulled or slab certified autograph of every pitcher to pitch a complete game no-hitter for the Oakland Athletics.

Here's what I have so far... along with some facts about each game.

By the way, kudos to all of you who go the extra length and do research for your posts.  Normally the amount of research I do is limited to a few minutes or so, but I invested over two hours writing this post.  Enjoy. 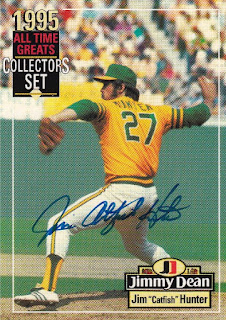 
About the Autograph:  This is one of three Catfish Hunter autographs that I own.  Unfortunately he passed away back in 1999, so the number of certified pack pulled autographs is limited.  This particular one was part of a mail-in offer that involved sending in two proof-of-purchases and $7. 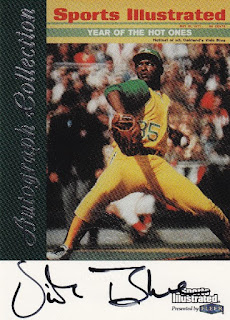 
About the Autograph:  Vida Blue's autographs are plentiful and affordable.  I picked up this autograph back in 2010 for $6 off of eBay, but I've seen these for half the price at local card shows.


About the Autograph:  Warren doesn't have any certified pack pulled autographs available.  Heck, according to Beckett, he only has 22 different trading cards.  I'm hoping to one day pick up a PSA slabbed autograph of one of his 1984 rookie cards. 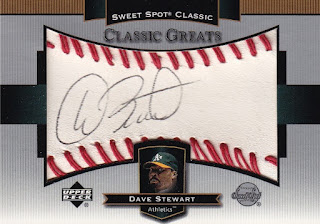 
About the Autograph:  I've enjoyed picking up affordable UD Sweet Spot Signatures ever since I returned to the hobby back in the late 2000's.  They often get a bad rep due to fading signatures, but as you can see... not all of them fade. 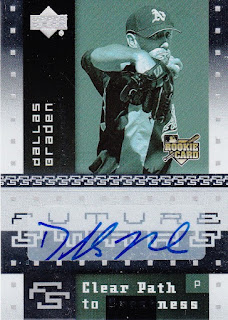 
About the Autograph:  I've made it very clear that I'm not a fan of sticker-graphs.  But sometimes you have to take what you can get.  I don't think I've ever seen an on-card, pack pulled signature of his. 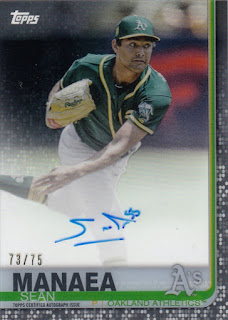 
About the Autograph:  This is the most recent addition to this project.  The day I read Schoenfield's article, I went to eBay and found this card.  The seller accepted my $6 offer.  Manaea struggled during Spring Training, but I'm looking forward to seeing him take his place on the mound when the season starts.


About the Autograph:  Fiers has a Topps Now autograph and at least one Topps Archives buyback signature featuring him in an Athletics jersey.  However... I'm not willing to spend more than $6 or $7 for one.  So the waiting game begins.

Some of you may have noticed that I skipped over the 3rd no-hitter in Oakland A's history.  That one took place on September 28th, 1975.  Vida Blue, Glenn Abbott, Paul Lindblad, and Rollie Fingers pitched a combined no-hitter against the California Angels on the final day of the regular season.

As of right now, I'm not including this one as part of the project, because I don't think Abbott or Lindblad have any certified pack pulled autographs available.  Maybe one day, I'll look for certified slabbed signatures of these two for my collection, but they aren't a priority.

Well that's it for today.  Happy Tuesday and sayonara!
Posted by Fuji at 3:00 PM