Card backs make up 50% of a trading card, but for some reason or another... I haven't given them my full attention for decades.  Sure I look at them when I'm sorting cards and building sets.  But honestly, most of my opinions on card sets are based on what appears on the front.  And it's been decades since I sat down and took the time to read card backs on a regular basis.

Sure... I've commented on them here and there over the years.  But I know in my heart that they've never been that important to me.  And that's a shame, because I've been really only paying attention to half of my collection.  Well thanks to The Commish, I've started to change.

Recently... he started writing posts again on his 1960 Topps set tribute blog:  Horizontal Heroes: The 1960 Topps Set.  I've been enjoying his daily posts, because he writes interesting facts about the players.

Today's post covered Bob Bruce, a Detroit Tiger pitcher that I was unfamiliar with.  While skimming the back of his card and looking at the comic, I noticed that Topps referenced Bruce's alma mater.

I immediately thought to myself... I wonder if Topps has ever mentioned San Jose State University (my alma mater) in any comics featured on the back of a 50's baseball card. 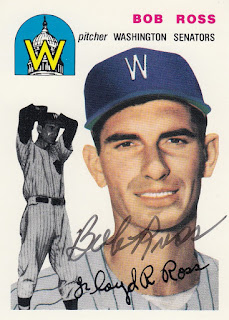 This card was part of a large autograph collection I purchased a few years ago.  I have no idea if the signature is real or not.  And it doesn't matter, because this post isn't about autographs.  It's about the card back: 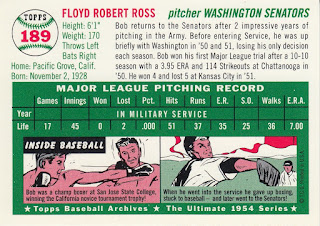 A closer look at the bottom left comic reveals that Bob was a boxing champ at San Jose State College before he serving for the military and eventually playing for the Washington Senators.

Thank you Bob and to all of the other bloggers who take the time to scan card backs.  I know I don't do it very often on my blog, but I promise that I have seen the light.  I will start looking at my card backs a little more closely and if I see anything interesting, I'll share it with you.

And just in case you do enjoy seeing autographs... here are a few other signatures I own of fellow SJSU Spartans:

Sorry.  These are previously scanned cards and I didn't scan the backs.  But here's another fellow Spartan that I scanned today: 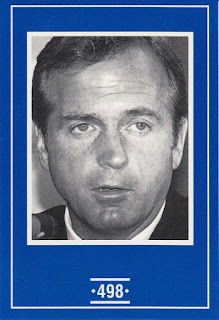 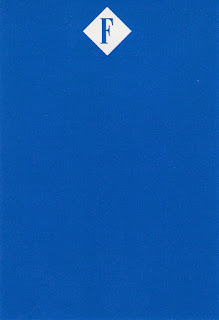 Anyone recognize this guy?

This card is part of a game called Face to Face that was released in the early 90's.  I've never played it, but I'm pretty sure you'd pull a card and have to identify the person in the photo.  Although they're technically not trading cards, they are cool collectibles that feature famous politicians, athletes, musicians, entertainers, authors, and other famous faces.

Okay... I'll wrap things up with some SNL's Spartan Spirit:


Happy Saturday and sayonara!
Posted by Fuji at 3:00 PM