Have you ever read a blog post, seen a card you absolutely love, and went on a mission to find a copy for your collection?  I'm gonna guess that at least a fraction of you have made a blog inspired purchase.

At the end of March, Bo over at Baseball Cards Come to Life! wrote about his purchase from an online antique store called Don and Chris' Old Stuff.  I was so intrigued by the variety of stuff he bought, I clicked the link he provided and went on a thirty minute shopping spree.

Their shop offers lots of variety and interesting knick-knacks.  I added a few items to my shopping cart, but due to the shipping costs, I came close to walking away without buying anything.

Then I stumbled across these: 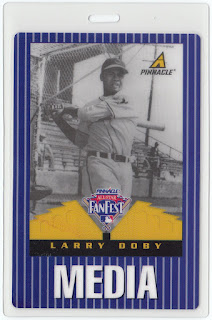 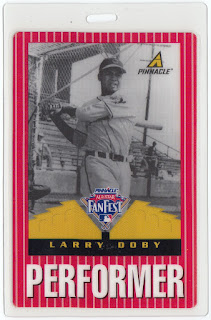 Back in 1997, the city of Cleveland hosted the MLB All-Star Game.  Part of the weeklong festivities included the Pinnacle All-Star FanFest held at the Cleveland Convention Center.  People who worked the event were given these laminated badges that feature a Larry Doby promotional card.

Based on the images I've discovered online, there are at least six different categories:  Collectors Showcase, Exhibitor, Facility, Media, Performer, and VIP.  One COMC vendor has five different ones available, but they're not exactly reasonably priced.  An eBay vendor has one of the badges listed for $13.99 (+ $3.99 shipping), which is a little more realistic if this kind of item interests you.

How rare are these?  I have no idea.  But based on what is available for sale and recently completed sales on eBay, these don't pop up on the market very often.  That's why I quickly added these to my cart when I saw they were only $3.50 each if you bought two or more. 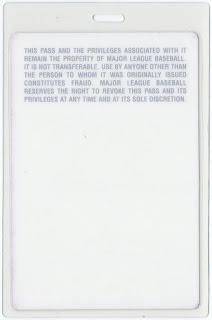 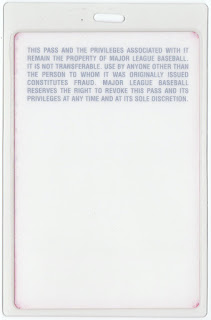 The website seems to have a lot of these types of badges from various sporting events and concerts, so my guess is these were purchased in bulk as overstock and probably weren't actually used at the event.

However that doesn't bother me.  I'm a huge oddball collector and although I don't specifically go out of my way to collect Larry Doby, he was the first American League player to break baseball's color barrier.

The only other sports related item I bought was this wax pack wrapper: 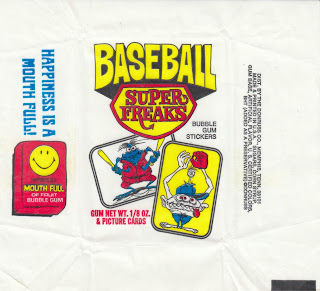 This item jumped out at me as being interesting and worth the $1 price tag.  In addition to this wrapper, I also grabbed these two wrappers from my childhood: 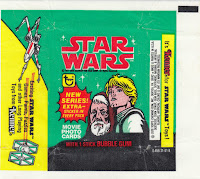 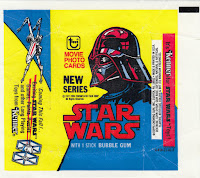 The first trading cards I remember opening were 70's Topps Star Wars.  I purchased two of each, figuring I'd figure out a way to display the duplicates... while adding the two cleanest wrappers to my 1977 Topps Star Wars set.

The vintage can labels were the thing that originally caught my eye on Bo's post.  I ended up grabbing these three because they depict the Golden Gate Bridge:

Each of these labels measure approximately 3.5" x 13" and ranged from 25¢ to 50¢ in price.  According to their website, the Western Sky and Golden Gate labels are from the 50's, while the Pacific Pride label is from the 40's.

I also grabbed this beer bottle label from the 60's for a quarter: 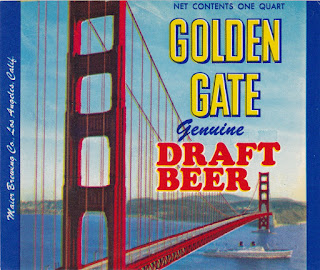 I wish I had bought more than one of each label, because I know at least one family member and a co-worker who might be interested in these.

Next up are some cucumber seeds: 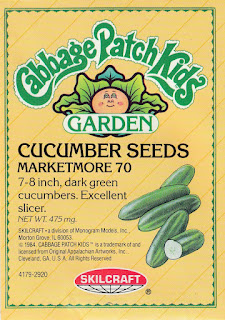 I'm a sucker for items from my childhood and even though I never owned or wanted to own a Cabbage Patch Kid doll... I remember when people were fighting each other for these back in the 80's. 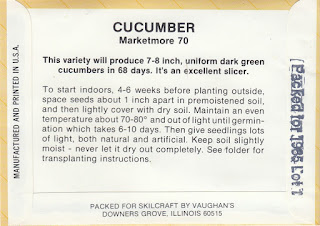 Can't imagine there was a demand for these seeds, which is why they're sitting on the shelves of this antique store.  But I helped them out by purchasing a ten pack for $3.50.

In addition to these packs of seeds, I also grabbed a few packs of trading cards too:

Figured that I haven't written a post on A Pack To Be Named Later in nearly two years, so maybe these unopened packs will provide some writing material.

The last item in my shopping cart is this postcard of Dr. Martin Luther King Jr.: 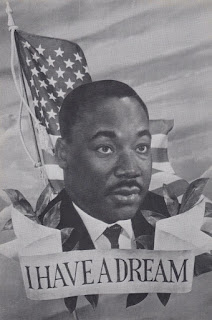 This isn't your average sized postcard.  It measures 6" x 9" and will make an excellent display piece in my classroom.  Here's a look at the back: 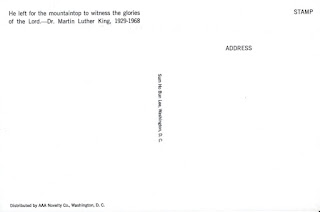 According to the website's item description, it was produced in 1968 after he was assassinated and possibly distributed in the Washington D.C. area.

Even though I have been cutting back on spending money, I've gotta admit that I was very excited about this purchase.  The store's inventory was very interesting and offered lots of variety... and their prices were fair.  In short... Old Stuff rules.  The only thing preventing me from placing another order anytime soon would be their shipping rates.  I paid $7.49 to have all of this stuff shipped to me.  That being said... at least I didn't have to pay sales tax.

Well that's it for today.  Hope all of you have a great week.  Happy Thursday and sayonara!
Posted by Fuji at 3:00 PM