When it comes to collecting cards, I don't think many people consider me a "set builder".  Heck... I wouldn't even call myself one.  That's because if there's a set out there that I really want to own... nine out of ten times, I'll try to find one for sale online.

But that hasn't always been the case.  Five or six years ago, I enjoyed the challenge of putting together sets piece by piece.  In fact, my website lists over forty different sets I'm in the process of building.  Am I actively building them?  Some of them... yes.  Most of them... no.

That being said... back in February I had placed a few orders on Sportlots and started to nibble away at these set builds in an effort to clear out some clutter in my office.

I've gotta say... round one was quite successful.  I haven't sat down and attempted to put together my second shopping list, but it's only a matter of time and when I do... I'm hoping to wrap up at least five to seven more sets.

In the meantime, Greg over at The Collective Mind sent me a PWE that allowed me to cross off three items on my wantlists.

The first card was a 2011 Topps Diamond Duos insert of Joe Mauer and Buster Posey: 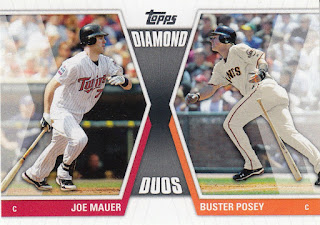 This was the last card I needed to complete the insert set: 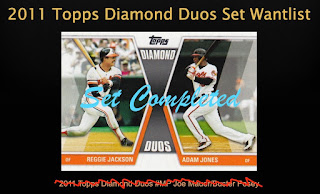 I honestly have no idea when or why I decided to build this set.  I'm guessing there was a nice starter set included in one of the collections I purchased.

Greg also sent me this card which finished another set I was building: 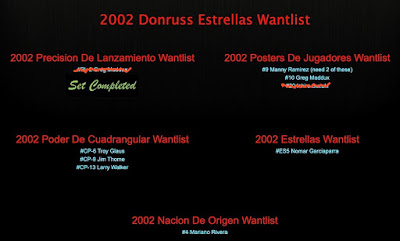 Once again.  No clue on when or why I decided to build these sets. I think I busted a box of this stuff or something.  Greg also sent me this Ichiro poster:

I've somehow managed to misplace this poster set, and I'm not exactly sure why I need two Manny Ramirez posters.  Regardless, I'm happy to be able to cross off Ichiro.

The last two cards he sent my way aren't part of set builds, but they are desired cards nonetheless.

I'm always excited to add a new Kurt Suzuki to my collection.  I'm one of those collectors who don't have any interest in opening this year's Heritage, so this was really cool to see.

And the final card is this Jeff Kent framed parallel:

Last year... Greg purchased a collection consisting of fifteen monster boxes and was looking for collectors to trade with.  On one of his posts, he mentioned having some parallels from this Diamond King set, so I left him a comment and he emailed me a list of what he had.

None of the ones he had really fit my collection, but I asked if I could get this card for my brother.  He's not a card collector, but he's a San Francisco Giants fan and these cards look so cool... I figured even a non-collector would appreciate it.

Thank you Greg for this generous care package!  I'll definitely shoot you a PWE in the near future with some Nationals and Redskins for your collection.

Happy Monday everyone... and sayonara!
Posted by Fuji at 3:00 PM