Star Wars has been a part of my life since I was four years old.  I'm pretty sure they were the first packs of cards I ever opened.  To put things into perspective, the first baseball card packs I remember opening were 1981 Donruss or 1981 Topps, which came four years after my interest in Star Wars cards. 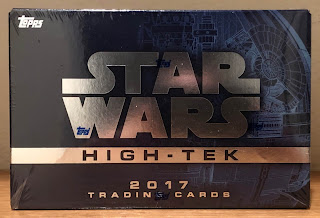 These days sports cards are my primary focus, but back in November I picked up a box of 2017 Topps Star Wars High Tek for $29.95.  The box was part of DA Cardworld's Black Friday sale.  Each box contains eight cards, one of which is hard signed.  I figured the price was reasonable, especially since I enjoy acetate cards, Star Wars cards, and on-card autographs.

Reasonable or not... my box sucked.  See for yourself: 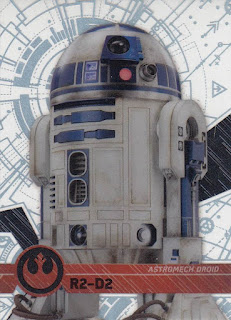 I decided to kick things off with the best card in the box.  R2-D2 is one of the most beloved droids in the Star Wars galaxy and my personal favorite.

Here's the on-card autograph I pulled:

As much as I love each and every one of the Star Wars movies, I had no clue who General Ramda was.  According to the internet, he appeared in Rogue One: A Star Wars Story.  The actor who signed the card and played the role of Ramda is Richard Cunningham.  It would have been a little cooler to have the autograph of the actor who played Richie Cunningham in Happy Days instead.

There were also two numbered parallels in the box:

I'm familiar with Barriss Offee, since I've watched Star Wars: The Clone Wars multiple times on Netflix.  Toshdor Ni is another character from Rogue One that I wasn't familiar with.

And here are the final four base cards: 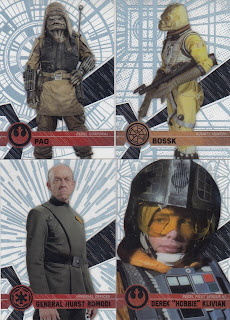 I've always been a big fan of Vader's bounty hunters, so the Bossk is cool.  The rest are "meh" at best.

Overall this box was almost a complete waste of money.  But that's how most of my box breaks are.  It's rare that I pull something I really, really want out of a pack.  The wiser move for me would be to take the money and buy something I'd appreciate.

However that's the thing.  Every now and then I get lured into buying a box, because I want to be able to beat the odds and pull something nice.  But realistically it's a trap.

I know most of my readers could care less about Legos.  But since today is Star Wars Day, I wanted to show off my latest purchase: 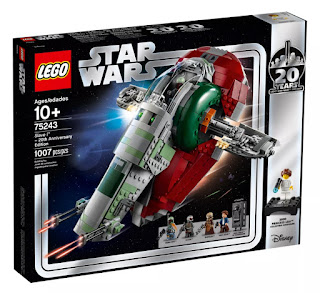 When I first saw this set on YouTube about a month ago, I knew I'd eventually pick one up. 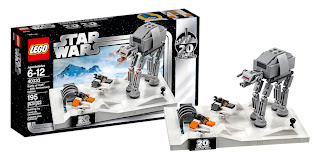 This weekend Lego is offering up a free Battle of Hoth set with any Star Wars purchase of $75 or more, so I decided to grab it now.

I can't wait to receive both of these sets.  I probably won't build the Battle of Hoth set.  But I'll definitely make the Slave I.

Are you a Star Wars fan?  Did you take advantage of any May the 4th sales?
Posted by Fuji at 3:00 PM