I Know That Dude

The 1994 Fleer Pro Cards Ogden Raptors cards have been receiving a lot of press lately.  They first showed up over on Dime Box Nick's blog back in early April.  A few weeks later, one of them popped up on Bo's blog.

One look and it's easy to see why people are drawn to this set.  Every player on the team posed with a giant raptor.  This kind of oddity is right up my alley, but I've actually been looking for this set for years... and the raptor never once factored into the equation.

I only care about one card in this set: 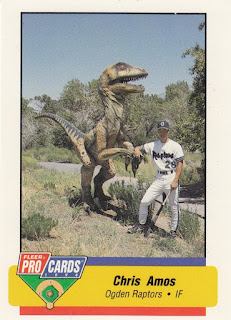 Who the heck is Chris Amos?

Well... he was my best friend in elementary school.  Technically he was best friends with five or six of us.  He was the stereotypical "cool" kid. 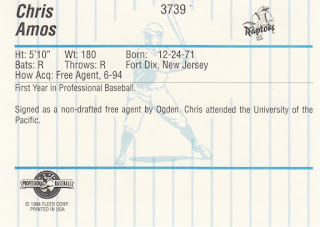 He moved either in 5th or 6th grade to the other side of town, but we'd hang out every now and then in middle school.  I remember seeing him play baseball and football when our high schools played each other, but we didn't stay in touch.

A few years later, my parents ran into his parents at a wedding, so they invited my family to their daughter's wedding.  That's the last time I talked to him.  At the time he was attending and playing baseball at UOP in Stockton.

Years passed and someone told me that he had been drafted by the Cleveland Indians, but I can't find documentation of that.  However I discovered he played one year of minor league ball for the Ogden Raptors... which eventually led me to the card shown above.

It'd be cool to reach out to Amos and see what he's been up to the past twenty-five years.  Unfortunately... I can't find him on Facebook and none of our elementary school buddies kept in touch with him either.

Maybe one day he'll search up his baseball card, stumble across this post, and reach out to me.  While we're waiting for that to happen... go ahead and answer today's question of the day:

Do you have any childhood friends who ended up playing a professional sport?  If so... do they have trading cards?

By the way... a huge shoutout to The Angry Card Collector.  He shared a eBay coupon code on his blog that allowed me to take $3 off any purchase of $3 or more.  As I stated earlier in this post, I've been looking to purchase this card for years, but I wasn't willing to overpay for it. 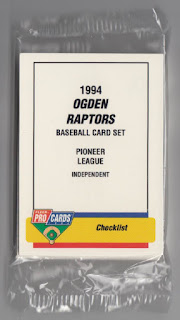 With the coupon, I walked away spending $3.46 which is a price I could live with.  By the way, the rest of the set means nothing to me.  I'm offering it up to SumoMenkoMan, since I'm forever indebted to him.