When I was a kid, my parents would drag me to their friends' annual Kentucky Derby party.  It was an excuse for them to hang out, drink, and gamble.  Me?  I'd play video games or watch movies with the other kids.

That's pretty much the closest I've ever come to being interested in horse racing.  I didn't bother watching the race yesterday and couldn't tell you anything about the event other than it costs betters a lot of money due to a disqualification.

But last month during a baseball card therapy session, I pulled this really sweet card out of a box of 2012 Panini Golden Age: 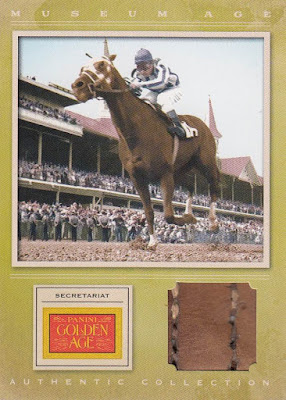 The card doesn't explain the origin of this piece of leather, but I'll go out on a limb and assume it's a piece of Secretariat's saddle or something.  Regardless of where it came from, it's still a really cool memorabilia card... and easily the best card I pulled from the nine boxes of Panini Golden Age I opened last month.

My original plan was to review the entire break, but I'm trying to limit the length of my posts.  So instead... I'll just show off my favorite cards from the break:

Before Jay Leno, Conan O'Brien, and Jimmy Fallon... there was Carson.  Each box of Golden Age promises one memorabilia card.  This box topper was a bonus and is numbered to 50: 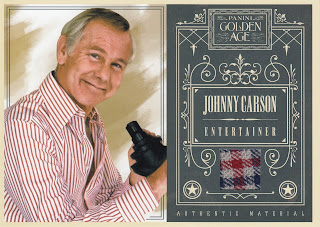 My only complaint about this Carson is that the swatch doesn't match the photo. 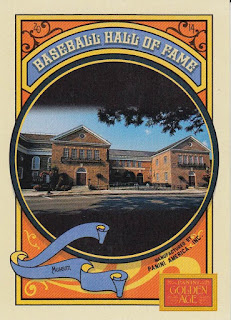 I'm not a huge fan of Panini baseball cards, but this card doesn't need an MLB logo.  One day I hope to make the trek across the country to Cooperstown.  One day. 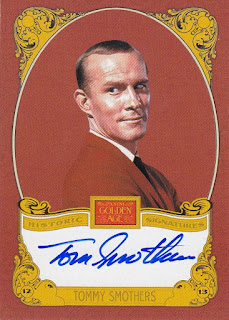 The Smothers Brothers were a little before my time, but this card makes my list because Tommy is a fellow San Jose State Spartan.  Go SJSU! 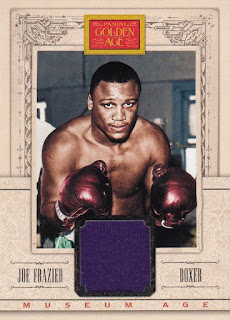 Muhammad Ali was one half of the "Thrilla in Manilla".  Frazier was the other.  The two legends fought each other three times with Ali taking two of the bouts.  Frazier's lone win happened to be the first loss of Ali's distinguished career. 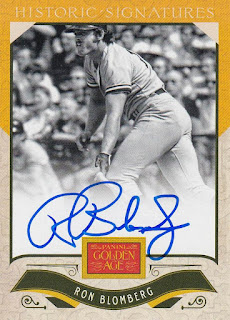 I'm a fan of baseball trivia... and Blomberg's claim to fame is he's MLB's first designated hitter.  Whether or not you're a fan of the DH, he's a part of baseball history and now a part of my collection. 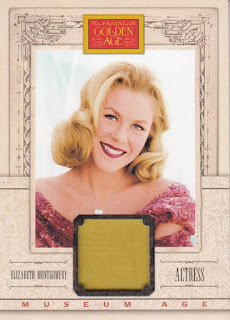 Before I close things out with my second favorite card from the break, if there's anyone out there who is building any of these sets... email me your wantlists and I can probably help you out.  Panini's collation sucked big time with this product.

And if you have spare singles laying around... here are my current set needs: 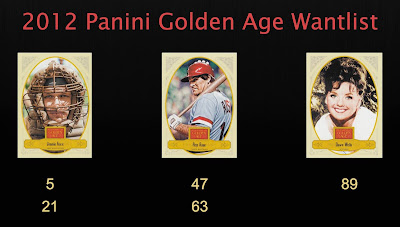 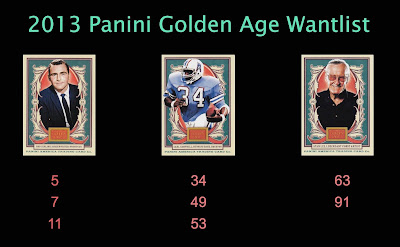 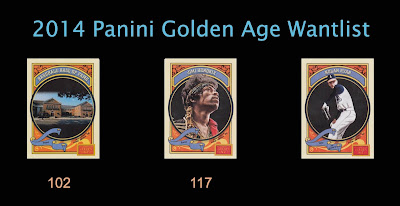 Okay.... here's my second favorite card from the break... 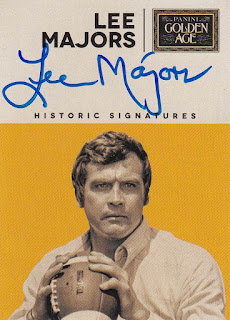 What little boy wouldn't love watching a television show about a bionic man with the speed of a cheetah, the strength of a gorilla, and the eyesight of an eagle?  I've wanted to add this card to my collection for a few years now.  Now I just need the Lindsay Wagner autograph to go with it.

How interested are you in horse racing?  Who's you favorite The Tonight Show host?  And are you a fan of the designated hitter?

Look forward to reading and responding to your answers...

If you're like me... you enjoy collecting autographs and memorabilia cards.  Here are the leftovers from my nine box break that didn't make the original post: