When it comes to talking baseball, there are plenty of debatable things to discuss.  Openers.  Designated hitters.  Barry Bonds.  Juiced balls.  The list goes on and on.

It's just a shame that he was a little before my time.  There's a chance, I watched him play at the Oakland Coliseum back in the day.  If I did, I have no recollection of it.  When Robinson played in his final MLB game, I was just about to turn five years old and was more interested in the newly released Star Wars than baseball.

Thankfully baseball cards, bloggers, and highlight films have helped bridge the gap.  Last month, someone (my memory sucks) showed off their 1973 Topps Brooks Robinson card on their blog and I immediately went hunting for a copy of my own.  Here it is: 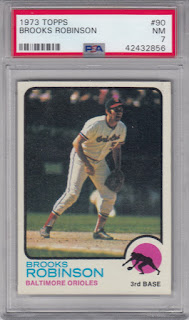 By now I'll assume you know my deep appreciation for well cropped action shots.  This card fits the bill.  I decided to go with a slabbed copy, because it was affordable ($9.99 + $2.99 shipping) and fits into my Classic Card PC as well.

I figured today was a good day to write about this card, since he celebrated his 82nd birthday over the weekend.  Happy belated birthday Mr. Robinson!

Okay... I just read this article on Nolan Arenado and this one on Clete Boyer, so I guess the greatest defensive third baseman is up for debate.

Who is the greatest defensive third baseman in MLB history?

Looking forward to reading your responses...