I've never met a teacher in my district who wasn't looking forward to Thanksgiving Break.  After two and a half months, we get a chance to set aside our laptops, put down our dry erase markers, and relax.
This year was extra special, because I had the opportunity to kick off my vacation with a card show at the Solano Town Center in Fairfield, Ca.  This isn't one of those 50 or 100 table shows.  No.  This one was advertised as having over 300 tables and after walking around it, I'd say it was a pretty fair description.
Although most of the dealers had your standard display cases stocked with graded cards.  There were also plenty of dealers who had unopened wax, complete sets, and of course the much anticipated dime boxes.  In fact, that's pretty much where I was parked 90% of the time.  But before I get to those purchases, there were a couple of other dealers I purchased cards from.
Purchase #1:  Five for a Buck  $8 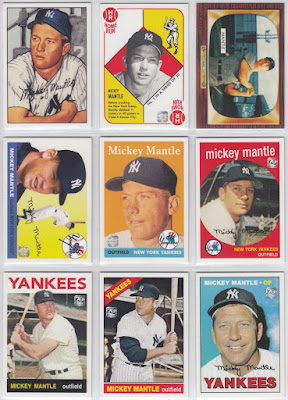 Back in November, I started seeing people post videos on YouTube opening up boxes of 2021 Topps x Mickey Mantle.  It's obviously just another money grab product by Topps that I've learned to accept as part of our hobby.  I didn't think I'd ever actually own any of these, but for 20¢ each... I decided to grab all of the ones this vendor had. 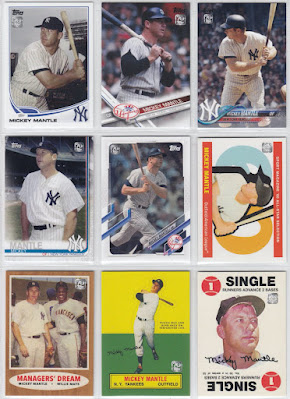 These cards will be affordable additions to my small Mantle collection and will blend in nicely with the 1996 Topps reprints I've collected over the years.
There was even a green bordered parallel sitting in the box:

2021 Topps x Mickey Mantle Green  #7 (#'d 81/99)
This dealer's quarter box (or 5/$1) contained everything from baseball to soccer cards.  Although I don't actively seek basketball cards, I did grab some Rui Hachimura cards for my Japanese athlete collection: 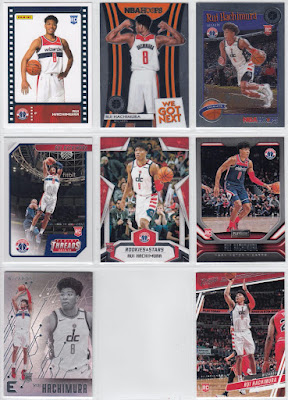 The one hidden treasure in this guy's box was this Ronnie Lott rookie card:

1982 Topps #486
The rest of the cards I purchased were mostly cheap baseball rookies and inserts which I'm too lazy to scan.
Purchase #2:  Pocket Schedules  $1
About five minutes and ten dealers later, I ran into a guy who had a bunch of sports books, programs, and magazines.  He started to ask me about my collecting interests, so I mentioned that I've been an A's fan for most of my life. 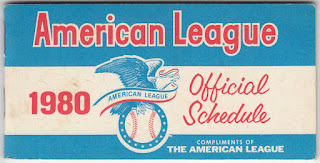 He proceeded to pull out the 1976 Oakland A's pocket schedule out of a box and told me any schedule was only a quarter or five for a dollar.  I don't usually go out of my way to pick up pocket schedules, but the price was right and the advertisements and designs gave off that nostalgic vibe.
Maybe one of these days I'll show off one or two of these in a little more detail.
Side Note:  By the way... back in December, I showed off a collection of leftovers I purchased from my buddy.  This was the vendor he bought the collection from.
Purchase #3:  2003 Upper Deck Opening Series Sheet $1 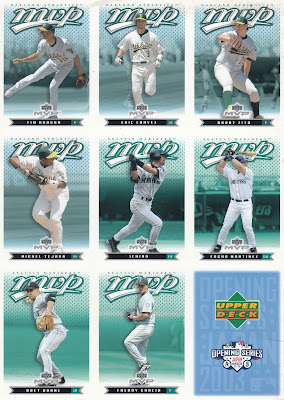 The pocket schedule guy also had this uncut sheet of cards produced by Upper Deck to promote the 2003 Opening Series in Japan.  The sheet is highlighted by Ichiro, but it also fits into my Oakland A's collection as well.
The back is actually the coolest part about this sheet: 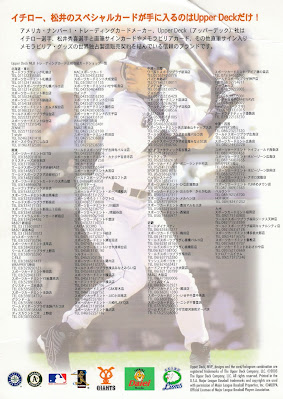 Unfortunately, I can't read Japanese, so I have no idea what's written on the back.  I'm thinking it's some form of directory, because there are a bunch of telephone numbers listed.
This series was actually cancelled by MLB due to the impending war in Iraq.  The A's and Mariners ended up opening their seasons against each other in Oakland on April 1, 2003.
Okay, it's time for the dime box purchases...
Purchase #4:  The 1st Dime Box  $8 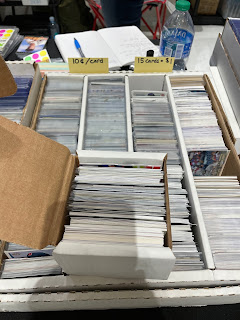 The first dime box was by far the best dime box.  That's because it was really a 7¢ box.  I've actually purchased from this dealer a few times over the years.  He's the one that sold me the Fernando Tatis Topps Chrome Negative Refractor rookie card back in 2019 for $20.  I didn't make any big purchases this time around, but I did almost fill up the 200ct. box with 120 cards from his table.
The bulk of this purchase were low-end inserts, parallels, and rookie cards.  Here are some of my favorites: 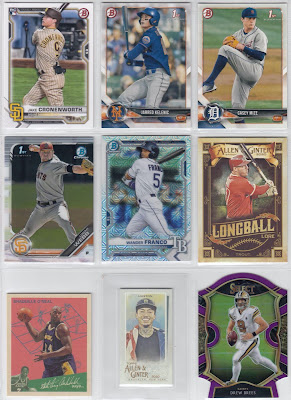 I was also able to cross five cards off of my 2020 A&G set build, including one short print: 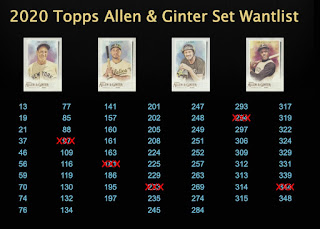 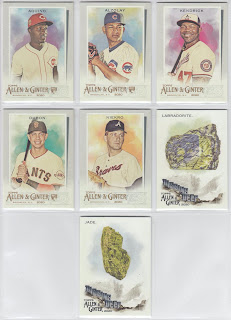 I also found two more Digging Deep inserts for that set build.
There was even a lone relic sitting in the guy's box:

2021 Panini Select Swatches #SS-RB (#'d 086/150)
Never heard of Mr. Bolanos, but I just couldn't leave this shiny, serial numbered card behind.
Purchase #5:  The Final Two Dime Boxes  $24
Editor's Note:  This post was originally scheduled to be published back in November.  Unfortunately, the draft sat partially completed for two months and by the time I came back to wrap it up... most of the cards from the final purchase of the day had been sorted and put away.
This dealer had his boxes spread out, so I didn't realize it was the same guy until I paid the second time around.  The gentleman had ten to fifteen monster boxes filled with cards of just about every sport you can imagine.
Although I don't remember specific cards, I do remember finding a bunch of Mother's Cookies singles, a stack of SI for Kids cards, and some 2019 Topps Chrome refractors for the binder.
Mental Note:  This is exactly why I need to take photos and scan cards immediately after I purchase them.
Well that wraps up my November card show haul.  This Saturday I will be headed to the Serramonte Mall Sports Cards and Collectibles Show.  My goal is to publish a recap next week... instead of waiting around two months.
Happy Wednesday and sayonara!
Posted by Fuji at 3:00 PM

Nice haul. This also reminds me that I still need to complete my '96 Topps Mantle reprints insert set.

Reading this is making me want to go to a card show. Now.

I'm glad you posted that Editor's Note, I was wondering whether I had gone back in time!

I had no idea there was another Mantle set, not that I am interested in that kind of thing.

Loving those skeds. If you ever see any Braves get them for me (please). I need a 300 table show and then three days to sift through everything, maybe 5 days.

I don't know how he makes a profit if he's selling Lott rookie cards for 20 cents.

The other card that stood out to me was the Wander Franco.

That sounds like a fun time. I wasn't aware of a new Mantle set, but it sounds like a cheap way to build a collection of his cards if you find them that cheap.

Oooh, that dude is a Wizard! I'll keep an eye out here in the DC area for unique stuff of his. (Not that I pay attention to basketball either).

I'm jonesing for a big show too. Missed the small monthly this month. Waiting on a couple SportLots orders to make up for it.

I really like the schedules, that '76 A's schedule is really cool. Also can't go wrong with those dime boxes, I'd love to find some Cronenworth in dime boxes around here.

Those schedules are great. I have a decent run of Giants schedules through the 1980s. I even went and got the vertical 2-pocket sheets (intended for #10 envelope covers) so I can display them unfolded.

The back of the uncut sheet has a list of authorized Upper Deck dealers in Japan at the time. Most of them are Sports Card Mint which still has a few locations left.

Those pocket schedules are my favorites of the bunch. Love the graphics, especially on the bottom two!

I love the "modern" computer graphics on the SJ Giants schedule.

That was a great deal on the Ronnie Lott rookie. I'd like to find a similar deal on that one at some point :)

bbcardz - one of these days i'll sit down and figure out which 96t mantles i need to complete my set. in the meantime, i'll pick them up when they're a buck or less (which isn't too often)

the diamond king - come down to the bay area this weekend... there's one in daly city.

night owl - it's one of those stupid online packs that topps sells from time to time. i wouldn't have known about it either except i saw two youtubers showing their pack results

johnnys trading spot - of course buddy. i actually have this hank aaron book thing i picked up at that show that i grabbed with you in mind. one of these days i'll snap a photo and see if it's something you need.

elliptical man - i'm guessing he didn't realize it was his rookie card since most of the cards he had in his boxes were new stuff.

jupiterhill - the only reason i knew about those mantles is because i watched some youtubers show them off. i don't even bother going over to the topps website anymore. best of luck to your royals this year. hope they give you a reason to watch

gca - doesn't look like hachimura is turning out to be a star, which will hopefully keep his cards affordable. hope you got some cool stuff off of sportlots

jeff laws - i enjoy finding anything with the swingin' a's printed on it. i wish he had more cronenworths in those boxes, but i'm pretty sure that was the only one

nick vossbrink - i have some newer giants schedules (maybe 2010ish). do you need any from that era? if so, i'll send some your way

junichi - thanks for the info. i figured it was some kind of directory. cool that it's an upper deck dealer directory

the lost collector - you're not alone. several people have already commented they didn't know these existed either. the good news is pretty soon they should be showing up in dime boxes.

bo - straight from a computer screen from the 80's

jon - me too. i live for finding deals like that. i used to find them at flea markets all the time. these days i might find a good deal like this once or twice a year

So many great cards here. Obviously move the Cronenworth and Franco as former Durham Bulls players. I like those Mantle reprints. I put together the Aaron reprint set from 2000?, which was a lot of fun.

You should check out Nebraska's basketball team this year. They have a Japanese player. I saw him earlier this year when they played NC State in the Big 10/ACC Challenge in Raleigh. The game went into four overtimes, just insane, but he had a good performance. Smooth shot, made a ton 3s that game.

I'm really surprised those online Mantles wound up in the 5 for a buck box. That opening series sheet is real cool too!