The Power of Cardboard and Panning for Gold

When I was little... my parents took me on a trip to the American River where we panned for gold.  That's when I learned about the California Gold Rush and how it essentially motivated hundreds of thousands of people to move here.  I don't remember all of the small excursions my parents took me back in the day, but I vaguely remember receiving a little bottle to put the gold (or maybe it was pyrite) in.
Forty years later, that bottle is long gone.  No idea where it's at.  Honestly I might not have ever given any thought to that little trip had I not seen this card pop out of a PWE sent from Jon over at A Penny Sleeve For Your Thoughts: 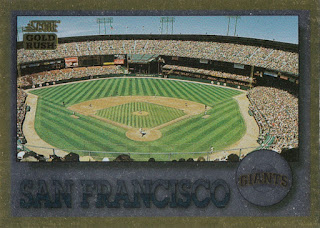 1994 Score Gold Rush #660
A few weeks ago, I had the opportunity to finally sit down and open up some care packages and this shiny gold parallel was the first card I noticed.  It immediately made me think of that trip with my parents and the bottle of gold flakes. 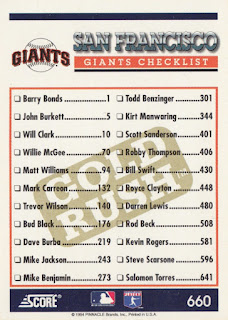 Upon further examination, this card also took me back to Candlestick Park where I'd go watch Will Clark and Robby Thompson play a few times each season.
That's just one more reason I appreciate this hobby.  When a piece of cardboard can take you back in time to your childhood and adolescence... that's pretty darn powerful.
Jon also sent me these four Oakland A's cards... 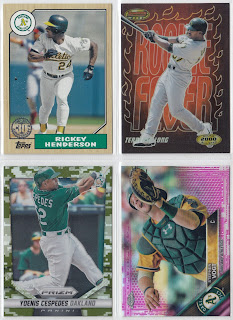 Each of these guys represent a different era of Oakland A's baseball... which come along with their own set of memories.
And finally four new additions to my Japanese Athlete PC: 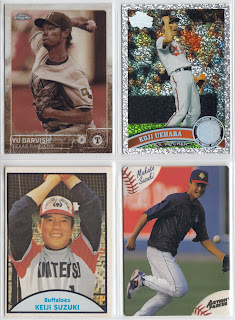 Although none of these guys made me think of my childhood, I will say that seeing that Action Packed card of Makoto Suzuki took me back to the 90's.  That's when that card company delivered some pretty awesome embossed cards to collectors.
I'm sure most collectors remember them for their football cards, but that Suzuki is proof that they also produced baseball cards.  In fact... I recently discovered a few others during that multi-month card collection sort in my garage: 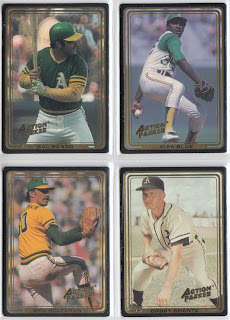 Sadly... I don't remember acquiring these cards or their released back in the early 90's... nor do I remember seeing any of these guys play for the A's back in the 70's.  But they do remind of an era when the A's were winning (the 70's) and when card companies still took the time to think outside of the box (the 90's).
Thank you Jon for the thoughtful PWE and inspiring this trip down memory lane.  I'm sorry it took so long for me to open it up and write this post.  I actually finished it over the Christmas Break, but postponed publishing it so it would coincide with the 174th Anniversary of Marshall discovering gold at Sutter's Mill.
Happy Monday and sayonara!
Posted by Fuji at 3:00 PM

Went on a class field trip to Sutter's Mill.

The Suzuki Buffaloes card wins it. I like that shot of Vida as well.

I really liked Action Packed back then, its one of the few times I cracked packs in the '90's, but I don't remember seeing the baseball cards. Action Packed also produced an NBA's greats set, which I have yet to complete.

Keishi Suzuki is a Hall Of Famer. He is partly responsible for Hidoe Nomo leaving Japan for the US - Nomo didn't get along with him when he was Kintetsu's manager in 1993-94

Panning for gold was one of the few things that I ever wanted to go to California for, but I never did. I did quite a bit of panning in Oregon, which was fine, but it wasn't the same.

johnnys trading spot - yo ho ho... it's quite the booty

the lost collector - i had a blast doing it. i could see myself doing it again one day

nick - i love those tcma japanese cards too. i picked up the whole set a few years ago, but enjoy grabbing singles for my binder collection

elliptical man - lucky guy. i think most of the 4th grade classes go to sacramento on a field trip, but don't think they go to sutter's mill. they should though

npb card guy - thanks for that info. i wasn't familiar with the name, but i'm always happy to add a hall of famer to my collection

jon - in ten to twelve years, i'm gonna retire. when i do, come out to california and we'll go panning for gold. thanks for the cards jon.