A Stocky Slugger with a Contagious Smile

On Tuesday the Baseball Writers' Association of America will announce the results of its 2022 Hall of Fame vote.  I've been enjoying reading fellow blogger's personal ballots.  , I won't waste either of our precious time since my fictitious ballot hasn't really changed.
Instead... I figured I'd show off some of the David Ortiz cards I've accumulated over the years. 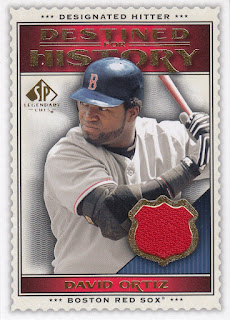 2009 SP Legendary Cuts Destined for History Memorabilia #DHM-DO
This card is a good place to start since he's likely to get the call either this year or next. 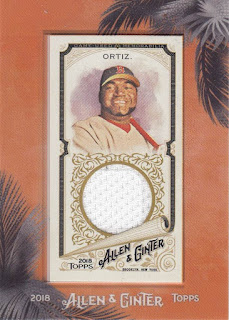 2018 Topps Allen & Ginter Framed Relics #MFR-DO
He was one of those guys I truly enjoyed rooting for after he arrived in Boston.  The stocky slugger could hit for average and crush the ball.  But it's his personality and contagious smile that transcended his popularity across the country and into my household. 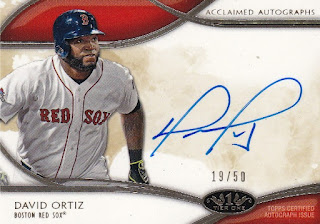 2014 Topps Tier One Acclaimed Autographs #AA-DO
Ortiz had plenty of acclaimed "clutch" hits over the course of his career, but the one that stands out the most to me was his heroic ALCS performance back in 2004.
The New York Yankees won the first three games in the series and were three outs away from meeting the St. Louis Cardinals in the World Series.  But thanks to a walk-off home run in Game 4 and a walk-off single in Game 5... Ortiz managed to keep the Red Sox hopes alive. 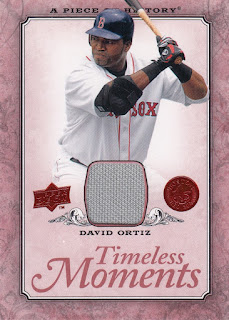 2008 UD A Piece of History Timeless Moments #TM-6
The Red Sox would march into Yankee Stadium, take the final two games and earn a ticket to the World Series. 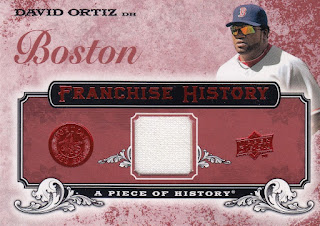 2008 UD A Piece of History Franchise History #FH-10
That was probably the moment I became a Big Papi fan.  Anytime someone can take down the Evil Empire, it brings me a little joy.

1998 Donruss Signature Series #NNO
1998 Skybox E-X2001 Signature 2001 #NNO
Gotta wonder if the New York Yankees would have went on to their 7th World Series in nine seasons... had the Minnesota Twins decided to pay Ortiz. 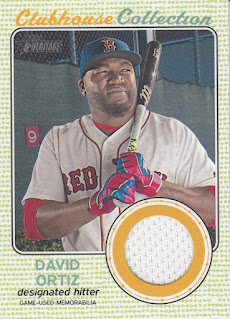 2017 Topps Heritage Clubhouse Collection #CCR-DO
Red Sox fans rejoice, because they didn't and his career flourished at Fenway where he become a clubhouse leader and wrapped up his career... 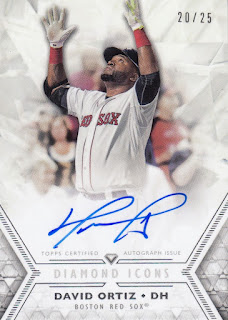 2018 Topps Diamond Icons Autograph #AC-DO
a Boston sports icon.
Hopefully this Tuesday he'll get the call from Cooperstown to become the 59th first ballot hall of famer.
Happy Sunday and sayonara!
Extra Innings
On Friday, John posted on his blog that Louie Anderson had passed away.  Earlier in the week, I was organizing a box filled with memorabilia cards... when I came across this card: 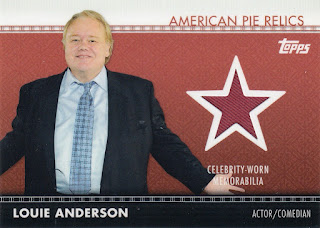 Wow, I am always impressed when you show off cards. And while I don't really prioritize autographs on my cards, I do like some of these, especially the old Twins ones! As for Papi in the Hall, I have always been an old, crotchety guy who thinks that DH's only play half the game. But I also give players their due when they do iconic things like you mentioned, basically beating the Yankees all by himself (not really, but kinda!) So I am pro on Ortiz making it.

i think it's going to be close for him this year based on the tracker results so far, but i agree with you - he's in this year or next. good to see a couple of twins cards in your collection!

as much as i hate to see the dh in the national league, it does annoy me a bit that ortiz was really only available to american league teams once the twins released him given his lack of defensive skills.

RIP to Louie. Sad to see another comedian go too soon.

As a Twins fan, the realty is Ortiz was a liability in the field and always hurt. Maybe if the Twins had put him at DH more often he would have been healthier, but then again, money is always an issue with this club. Ortiz has also complained about the way they managed him.

Love that Papi Skybox autograph. I have put together a lot of that autograph set, including that card. Always like looking at Papi's Twins card.

RIP to Louie Anderson. He has a cameo role in Ferris Bueller's Day Off as the flower delivery guy.

Even I'm a David Ortiz fan.

One of the few legends I've seen play in real life - when I went to Fenway Park in 2016. The Red Sox crushed the Rays and I'm sure he got a couple of hits. I should look that up. I've got a newspaper clipping somewhere.

He is def. a PC guy of mine. Should be a shoe in if not this year then next (I believe he'll get the nod this year).

Nice collection of Ortiz's! I think he'll get in this year with just a vote or two over the required 75%. It'll be close, but he's definitely worthy!

I love that Louie card!

Louie > Ortiz. And not just the girth.

Quite the collection. Those patches are legit, back when they were game-used and not manu-patches. You always have some fun treasures to dig up.

the diamond king - i'm old and crotchety too :D

gcrl - i have a few more twins sitting in the pc. i'm a puckett guy. plus kurt suzuki played in minnesota.

the lost collector - i was familiar with louie, but not super familiar with his work. i guess i should look at his imdb and refresh my memory

crocodile - i understand you completely when money is always an issue with your team. i'm an a's fan. they always have one of the lowest payrolls in baseball

the snorting bull - i'm pretty bummed that i passed up an opportunity to buy his autographics card from the year before. i love ferris bueller's day off. next time i watch it, i'll look out for louie

gtt - the guy was very likable

jongudmund - i'd say there's a good chance i've seen him play too. i know i've watched a few red sox games at the coliseum. my problem is i don't have the ticket stubs or the memory to pinpoint any specific games

johnnys trading spot - i'm sure glad he did. he had one heck of a career

matt - looks like he got 11 more votes than he needed... but still a pretty close call

grant - i love that relic set. i'm a big fan of non-sports relic cards... which is why i tossed that card in a box at some point

anonymous - are you a yankees fan?