Back in October, I set up at my buddy's card show in South San Francisco.  Although my sales were way down compared to the July show, I did manage to pull off my first "old school" trade in years.  What's an "old school" trade?  Well it's how I traded when I was a kid hanging out on the porch with friends.  One of my friends would pick a card or some cards from my trade stack and then offer up something in return.
These days, most of my cardboard exchanges are "blind", where I send and receive random stuff to fellow collectors.  In fact, I have little interest in conducting "old school" trades, because my trade bait inventory hasn't been updated in a long, long time. 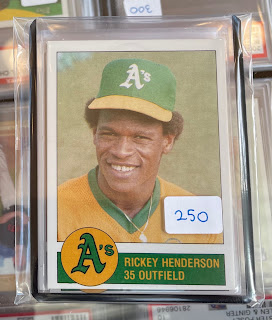 However at the show, there was a gentleman who was very interested in my 1981 Granny Goose set.  If you're not familiar with these cards, I written about them before.  Feel free to click here to read more about one of my favorite oddball issues of all-time.  For those of you who prefer the Cliffs Notes version, these Oakland A's cards were inserted into bags of chips back in the early 80's and the 1981 set is considered the most challenging to build. 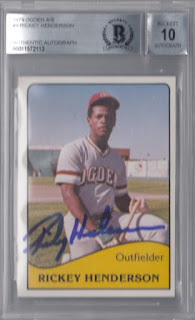 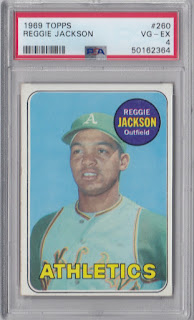 This is a card that I have wanted to own since I was a kid, but gave up trying to own. 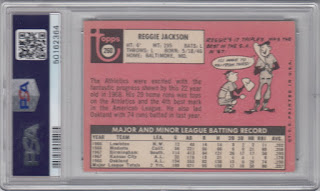 The bottom line is they're a little too pricey for my hobby budget (especially these days).  It took a lot to hold back my excitement before accepting his offer.
In case you're wondering... the rare Revering wasn't part of this trade.  I love me some Reggie, but I hunted that white whale for way too long to let it back into the wild.
Here's your question of the day...
If you were a manager, who would you rather have in your line up?  Reggie or Rickey?
Who do you own more cards of?
The Man of Steal would be my response to both of these questions.
Well that's it for today.  Happy Tuesday and sayonara!
Posted by Fuji at 3:00 PM