Watching the Oakland A's season come to an end last night hurt.  I wasn't surprised.  The Tampa Bay Rays have been playing well and Charlie Morton had pitched well against them this season.  But the entire day leading up to the game... I kept telling myself that the A's would find a way to win the game.

Oh well.  Maybe next year.  Until then, let's check out the second half of my card show haul from last weekend... 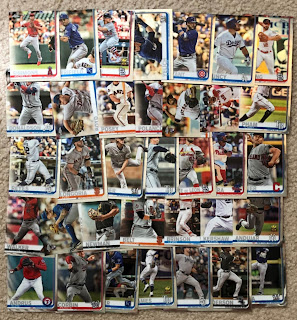 After digging through possibly the greatest dime boxes I've ever encountered... I moved on down to the next vendor who had a display case filled with high end autographs and rookie cards.  The dealer asked if I was looking for anything in particular and I ask if he had any 2019 Topps Chrome base cards.

After about twenty minutes, I ended up pulling out 35 cards and the guy ended up hooking me up with a one dollar price tag. 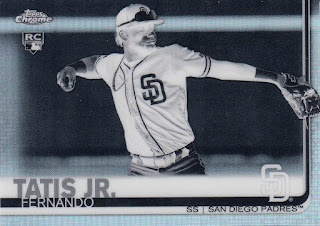 After paying for the singles, I asked to see his Tatis rookies and one of the cards was a sepia refractor.  He originally had a $25 price tag, but I told him Tatis sepia refractors were selling in the $15 to $18 range.  I offered him $20, since he hooked me up with the great deal on the base cards and he accepted.

When I got home, I looked at the card a little closer and didn't see the typical brown tint that sepia refractors have.  After a little research, I figured out that this is a reverse negative refractor which is a little tougher to pull.

After I left the Chrome guy's table, I headed back to the guy with the awesome dime boxes.  My buddy Ben was still hanging out at his booth and the crowd had died down a little.  I decided to look at his graded cards. 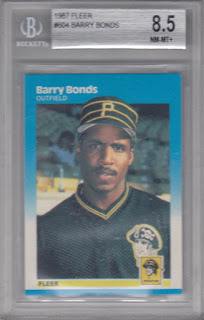 It's hard to believe that this card sold once sold for close to $50 ungraded.  I realize that prices on this card have collapsed over the past decade or so, but $4 seemed like a fair price... especially since I'll be throwing it into my sports card time capsule and forgetting about it for a year or two. 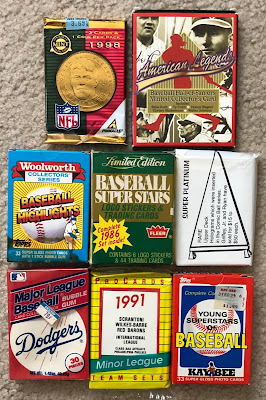 The dime box guy also had two boxes filled with quarter packs and sets.  I grabbed out these 8 items that I'll probably write about in a future post.  By the way... the white pack labeled "super premium" contained a bunch of Upper Deck Looney Tunes holograms from the early 90's.  Honestly those singles were worth the two bucks by themselves.

The final purchase of the day came as I was about to leave the show.  My buddy who I drove up with was talking to his friend, so I started digging through this dealer's dollar box.  I just couldn't pass up these three cards for a buck a piece.

Adam Eaton isn't a perennial all-star, but he's a solid hitter for the Washington Nationals.  And if you collected cards in the early 90's, then you're familiar with Juan Guzman.  And the last card is one of those cut signature monstrosities created by TriStar.  However it's numbered #1/5, so it's an affordable addition to my Prime # PC.

Well that wraps up another Oakland A's baseball season... and another card show haul.  On the bright side, there's only one more day until the weekend and the De Anza Flea Market.