Out of the Ordinary

Halloween was always one of my favorite holidays of the year when I was in elementary school.  If you know me, then you know that 90% of it was the candy.  Man I enjoy my sweets... and I was way worse when I was a little kid.  I'd pretty much eat everything except for the candy corn and peanut butter taffy that came in the brown and orange wrappers.

Then there was the part of showing off your costume at school.  My mom would always want to make me a costume, but I insisted on buying the cheap plastic, store bought ones.  Damn.  I was such a fool.  Oh well.  It still allowed me to wear something out of the ordinary for one day without being judged or ridiculed.

I figured in the spirit of Halloween, I'd show off some memorabilia cards that feature players wearing costumes.  I mean... wearing uniforms of teams they aren't typically remembered for.  Well... not by me at least.  For example, Rickey reppin' the Red Sox... 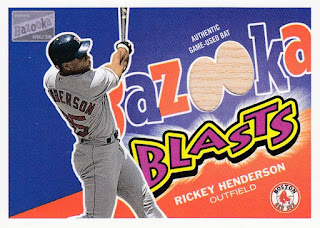 It's one thing to see Rickey wearing Yankee Pinstripes.  That's scary.  But it's not every day you see him wearing a Red Sox jersey.

It's probably even rarer to see him donning a Mariners jersey... 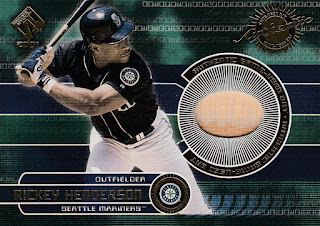 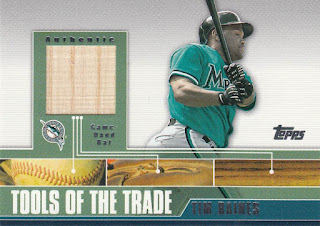 It's also kind of weird to see the Tools of the Trade moniker being used on a Topps card instead of a Playoff card.

Moving along, here are a few more... 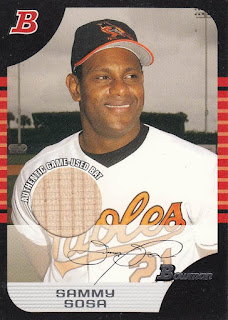 I just started to notice a pattern here.  These cards are all game-used bat cards.  I guess there probably aren't a lot of Sosa Baltimore Orioles game-used jerseys floating around out there.

Okay... here's an obligatory jersey card for you... 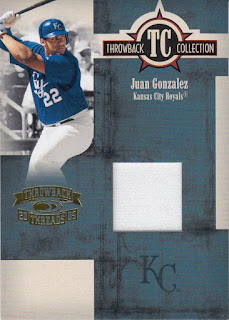 And here's even a manufactured relic for all of you as well... 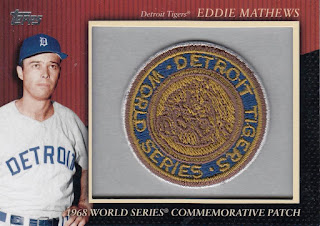 I might have remembered seeing Sosa with the Orioles or Raines with the Marlins... but I honestly had no idea Mathews played for the Tigers.  He actually played two seasons in Detroit.  Then again... I wasn't even born yet.  That's why seeing Mathews without a Braves jersey is a little out of the ordinary for me.

What are some players and teams you'll never get used to seeing together? 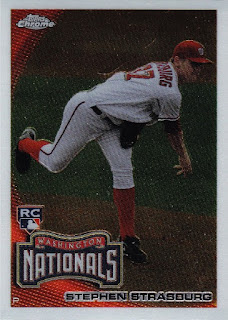 Congratulations Washington Nationals fans!  What an awesome World Series.  One of the best I ever listened to.
Posted by Fuji at 3:00 PM