Today's post is going to recap my three purchase haul from the Branham High School Flea Market last Saturday.  However before I show off the goodies... I just wanted to document that this particular flea market has really become popular among locals.  With each passing month, it seems like more and more vendors are signing up to sell their stuff.

There were at least five vendors with cards... and two of the regulars weren't even there that day. 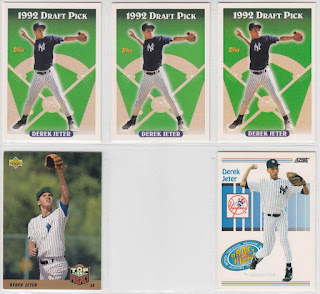 The baseball card collection was sorted by player's last name and the gentleman who was selling the collection wanted a dollar per card.  There were tons of cards from the 80's and 90's with plenty of hall of famers and future hall of famers.

These five Jeter rookie cards were the only cards I ended up purchasing.  None of them are in mint condition.  However I figured they were still worth a buck each since he's a lock to make the Baseball Hall of Fame next summer.

Sitting next to the baseball collection was a hockey card collection in plastic bins.  I wasn't really interested in these until my friend pulled out a few cards and asked me if they were worth anything. 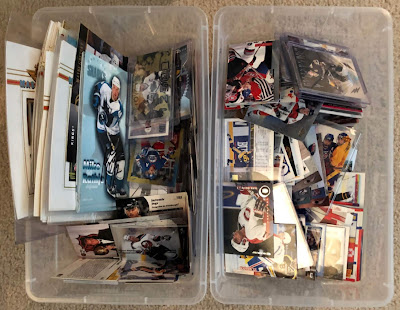 Back in the mid 90's, I really started getting interested in collecting hockey cards.  Part of it had to do with the baseball strike.  The other half of the equation was the arrival of Owen Nolan in San Jose.  It didn't take long for him to become my favorite player and I began chasing down as many of his cards as I could get my hands on.

As luck would have it, there was an Owen Nolan autograph sitting in this bin along with a few other notable Sharks: 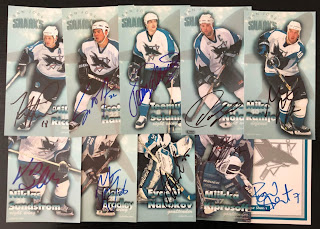 But they weren't the reason I bought the collection.  These were:

Here's a closer look at some of the key cards I found sitting in those bins: 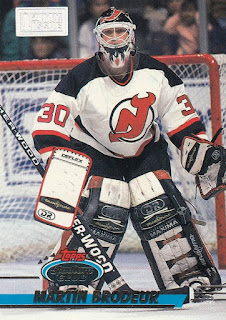 Back in the day, I opened up a lot of 1994-95 SP hockey trying to pull this card.  According to Beckett, Upper Deck inserted one of these cards per case... which explains why I never pulled it.  It took me twenty-five years, but I finally own a copy.

I was crossing my fingers that this would be the diamond parallel, which actually contains a real diamond embedded in the bottom lefthand corner... but it wasn't.  It's still a really cool insert though. 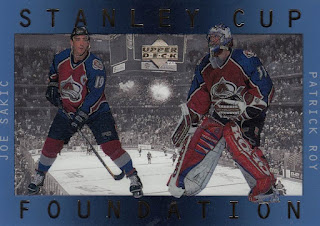 This card is my favorite card in the collection, but it's not the rarest.  That title belongs to this card: 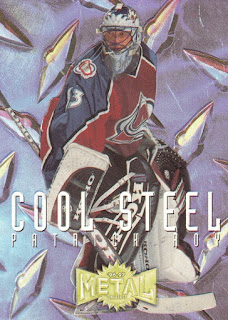 This card was inserted into 1:480 packs.  It's not worth that much these days, but back in the 90's this card would have sold for triple digits.

In addition to these awesome 90's inserts, there were also these oversized cards thrown into the bins: 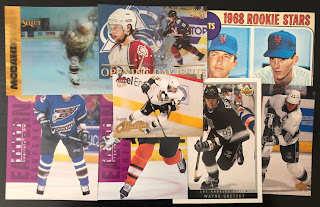 And for those of you who enjoy Stadium Club Master Photos, these were included as well: 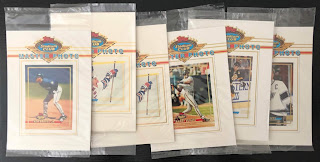 I'll probably write highlight a few of these at some point.  If I'm not mistaken, they were box toppers and part of a redemption program back in the day.

Well that wraps up the hockey card collection.  I was pretty stoked when the guy said he only wanted $15 for it.  I didn't even bother trying to haggle.  There are a few cards in this bin that are worth that price alone.

Compared to the hockey card collection, this purchase is pretty bland.  Another dealer I had never seen before had this box of cards sitting on his table.  Inside  were a bunch of stars and hall of famers for my vintage football card binder: 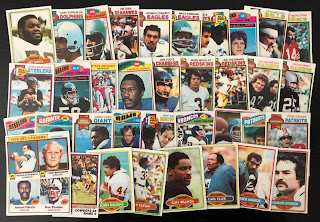 One of them was a rookie card of my favorite football player of all-time:

The condition of the Largent gives you an idea of what the other cards in the box looked like.  Rounded corners and off-centered cards were the norm.

Plus there were a bunch of Star Wars cards mixed in: 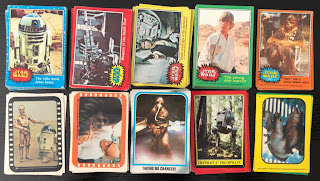 And a few other non-sports singles: 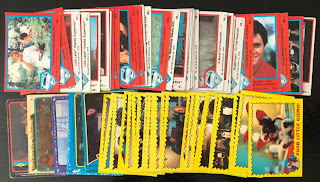 Well that wraps up my recent trip to the flea market.   My next trip won't take place until Saturday, November 2nd when I hit up the De Anza Flea Market.  While the Branham High School Flea Market continues to grow... I feel like the De Anza Flea Market is headed in the opposite direction.  But it's pretty big... and that means I'll at least get my steps in.