Have you ever woke up, started reading your email, and suddenly realized you forgot to write and publish a post for today?

That's what happened at around 5:20 this morning and let's just say... it wasn't a good feeling.  In short... it felt like I was one of my middle schoolers who forgot to do their homework and the teacher was coming around to check it.  Fear, frustration, and panic hit me all at once.

I was hoping to spend a little more time talking about this set, but due to the circumstances, I'll have keep things short and sweet.

Twenty-five years ago, Flair produced one of my favorite inserts:  the 1994 Flair Hot Gloves. 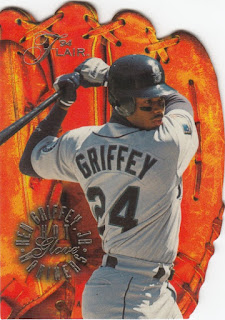 One look at the Ken Griffey Jr. card should give you an idea of why these inserts became an instant hit with collectors.  These inserts were printed on thick card stock and were one of the first die-cut insert cards in the hobby. 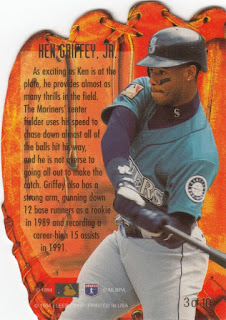 At the time demand far exceeded supply, which sent these inserts soaring in value.  Here's a quick look at what they were listed at in Beckett Baseball back in November 1995: 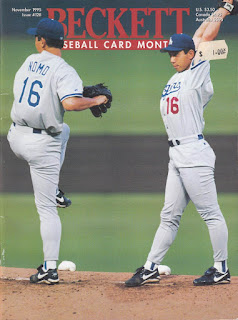 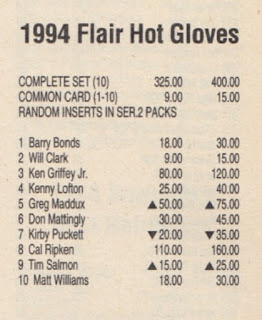 Today, most of these can be purchased on eBay or COMC for less than $10.  I purchased my set for $35 (+ $5 shipping) on eBay last week.  I realize that book value hasn't been a reliable tool in decades, but 90% depreciation is still eye opening.

Here's a closer look at the set in its entirety: 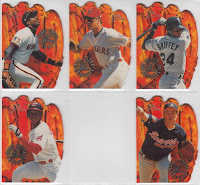 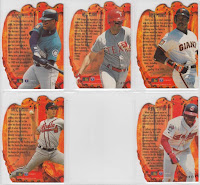 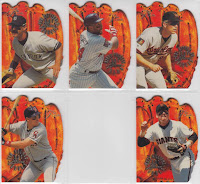 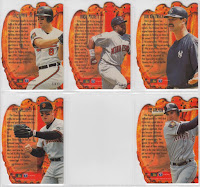 As you can see, the ten card set honored some of the best defensive players in the game.  In fact nine of the ten guys represented on the checklist had won at least one Gold Glove Award within the previous three years.

Tim Salmon who was the hot rookie from the previous year is the only guy in the set who never won the award, but considering how popular he was at the time with collectors, it's not surprising that Fleer added him to this set.

Will Clark is the only other player who didn't take home multiple Gold Glove Awards during his career.  As for the hall of famers... Griffey, Maddux, Puckett, and Ripken are the only ones honored so far.

Well... it time to get myself out of bed, into the shower, and get ready to head into work.  But before I do, here is today's question of the day...

What are some of your favorite insert sets from the 90's?