It must be peak season for card shows, because there have been a few in my area... plus I've seen a bunch of posts highlighting card show hauls over the past month or two.

Today's post also covers some cards acquired at a card show.  Only there's one little twist.  They weren't purchased by me.  They were purchased by Dennis over at Too Many Verlanders and sent to me in a care package last week.

Let's kick things off with my favorite card in the package:

Tanaka has looked awesome this post season for The Evil Empire.  One of the things I love about this card is that he's not pictured in Yankee Pinstripes.  This card appears to be one of Tanaka's first trading cards.  It'll go nicely with some cards Julie sent me a few months ago.

In addition to this Tanaka, Dennis also hooked me up with a bunch of cool cards for my Japanese PC:

This insert card celebrates Ichiro breaking George Sisler's single season hit record back in 2004.  It's hard to see, but it's actually serial numbered on the back to 2004. 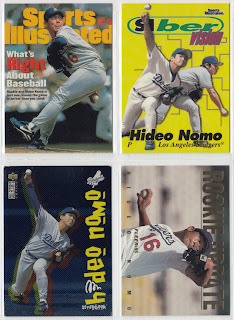 Dennis hooked me up with a few Hideo Nomos.  I don't think I've ever seen these two Sports Illustrated cards above.  But my favorite Nomo in the package was this card:

Back in 1995, Select Certified was considered a premium product, which meant that I didn't have the opportunity to open up a lot of this stuff.  Nomo had several cards in this product and now I have one less card to chase down.

There weren't just Japanese players in this care package.  Dennis also hooked me up with some Oakland A's cards and the greatest San Diego Padre that ever played... 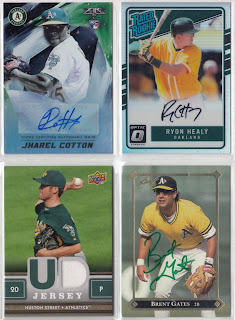 Brent Gates is a nice blast from the past.  He had a couple of promising seasons early in his career with the A's.  Not sure what happened to him, but I'm pretty sure this is my first autograph of his.

And rounding out the care package were two new additions to my Damaged Card PC:

I normally dislike this product... but I absolutely love this card.  The damage is pretty obvious on this one.

It's a little harder to see the damage from the scans on the next card...

But if you look at the scan close enough... it kinda looks like snow falling on Jeter.  That's because there's some chipping taking place... most likely due to cards sticking together.  This will definitely make the Damaged Card Hall of Fame.

Thanks Dennis for this very generous care package.  I have a few Tigers set aside for you.  I'll have to dig through my hockey and football rookie cards to see if I have any Michigan alumni that I can send your way.