Some people exercise to help them take their mind off of their problems.  Others use drugs.  Me?  I walk around my "not so local" card show.

On Saturday I went with my buddy Ben to the Serramonte Mall Sports Cards, Toys, & Collectibles Show and for a solid four hours, I barely gave "work" a second thought.  Instead I was blown away by the increased number of sports card dealers and some pretty solid deals.

I've got lots to share and not a lot of time, so let's get going... 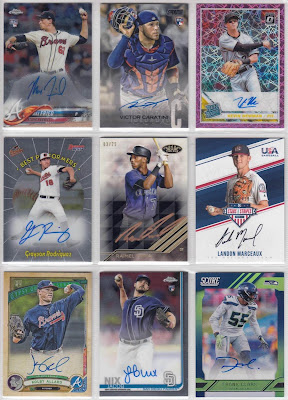 Each of these cards were sitting in his $2 box and with the exception of the Jacob Nix and Frank Clark, they'll be thrown into the time capsule I've been dropping hints about. 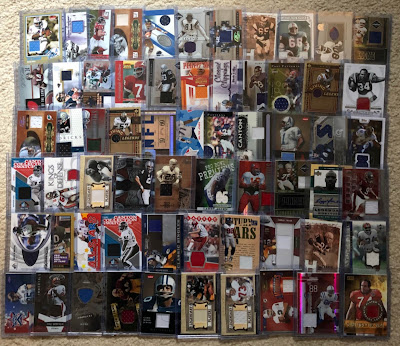 While driving up to Serramonte, my buddy and I were discussing how autographs and memorabilia cards just don't hold the attention of collectors as much as they used to.

However when I saw memorabilia cards of guys like Terry Bradshaw, Chuck Bednarik, and Earl Campbell sitting in a stack of top loaders, I couldn't help myself.  I asked the dealer how much he was selling them for and he told me they ranged from $3 to $5 each.  If I'd be willing to purchase the entire stack of 63 cards, he'd give them to me for $100.

$100 is a lot to drop on football cards, but there were no commons in this collection.  Only hall of famers and fan favorites.  My favorites were the three new additions to my Green Bay Packers PC and this Jim Otto: 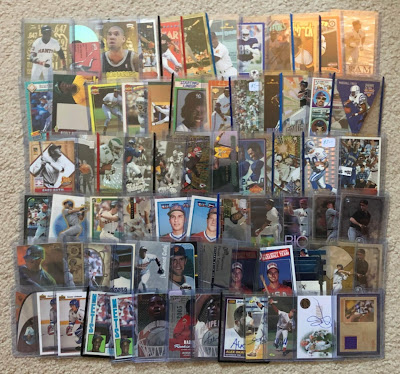 Okay.  This statement is obviously a little exaggerated.  But I was stoked to find so many cool cards for only a dime each.

The seller was a college kid who was set up for the first time at this show.  He had tons of vintage cards, a few graded cards, and really awesome dime boxes.  I would have spent more time at this guy's booth, but his stuff caught the attention of other collectors and dealers... and within five minutes of my arrival, he was swamped.

I'm not a big fan of rubbing elbows with other people, so I gathered my stack of cards, called over the dealer, and paid the guy.

I don't have the time to scan each card individually, but here are five of my favorites in the bunch:

When was the last time you found a Wade Boggs rookie card in a dime box?  There were also rookie cards of Madison Bumgarner, Buster Posey, Darryl Strawberry, Jim Abbott, Will Clark, Robin Ventura, Steve Nash, Michael Irvin, and Teemu Selanne.  Plus some shiny inserts and parallels from the 90's... mixed in with a handful of memorabilia cards and autographs.

I'm just a little bummed thinking about what I left behind in those boxes.

Okay... this post seems to be dragging on and I want to limited my writing sessions to no more than an hour a day this week, so I'm going to split my card show haul into two posts.

It was nice to hang out at the card show and chat with other collectors including Dan who authors the blog:  The Other World.  We hung out with his buddy and talked about vintage cards, our collections, and they gave me a quick introduction to Magic: The Gathering cards.

Well that's it for today.  I'm going to try to post the rest of my card show haul on Thursday.  Until then...

What sort of things do you do to help you take your mind off of things?

Hopefully it doesn't involve anything too addictive or illegal.