It's that time of the year again.  No... I'm not referring to the release of 2021 Topps baseball.  That's all fine and dandy, but honestly it's hobby news that has little impact on me and my collection.  Will I want some cards from the set?  Sure.  But I'm not too worried about getting my hands on an A's and Padres team set eventually.
Right now... my focus is with my allergies.  The past two nights have been miserable.  I've woken up way more than usual with a scratchy throat, itchy eyes, and the standard headache.  But I'm not going to let that ruin my February Break.  I've got some big plans for this upcoming week... and one of them is to sort through a few more 5,000ct. boxes that are currently cluttering my office.  The only thing that will keep me from reaching this goal will be a sore back and a little laziness.  The solution is to stay motivated and avoid sitting on the floor for long periods of time.  We'll see how that goes.
In the meantime... let's check out another This Week in Blogging post...
#1:  Retired Oakland Athletics Numbers
The Oakland A's don't receive a lot of hobby love on the blogosphere, so I always get a little excited when someone writes a post about them.  Last Saturday, CinciCuse Bill wrote about the jersey numbers they've retired over the years. 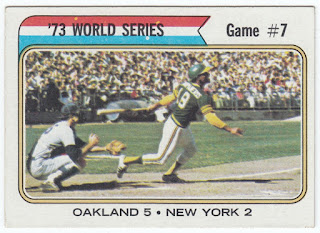 1974 Topps #478
He also asked his readers which former A's player will have his number retired next.  I'm not sure if it'll happen, but my best guess is Bert Campaneris (#19).  He's the A's all-time leader in games played, hits, and dWAR, while representing Oakland at the Midsummer Classic five times.  He also was a key member of The Swingin' A's teams that brought three consecutive World Series Championships to the Bay Area in the 70's.  Just not sure if that's enough to have your jersey retired.
#2:  Rookie Cup Cards
Topps Rookie Cup cards have carved out a nice niche in our hobby.  And if you are a fan of them, then you're in luck... because hiflew over at Cards from the Quarry wrote a pair of posts on them this week. 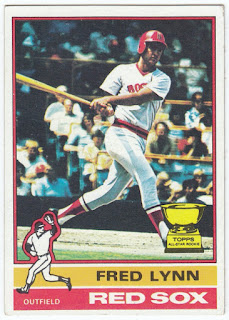 1976 Topps #50
In the first post, he created his version of the Rookie Cup dream team.  A few years ago, I started listing out my favorite Rookie Cup cards (that's still sitting in my blog drafts).  The Fred Lynn was the only player that made both of our lists. 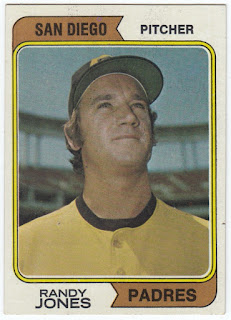 1974 Topps #173
The second post focused on the 1974 Topps set, which didn't have any Rookie Cup cards.  However he reveals where he found the list of Rookie All-Stars Topps created back in 1973. 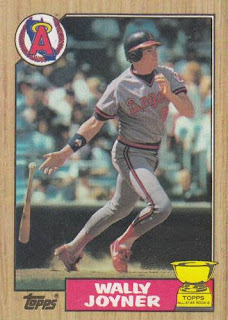 1987 Topps #80
I haven't figured out my all-time favorite Rookie Cup card... but this Wally Joyner is in the running.  1987 was the first time I ever pulled a Rookie Cup card from a pack.  That was also the year I discovered boxes of baseball cards at Costco/Price Club which transformed the way I collected.
#3:  1966
2020 was a bad year as a whole.  Obviously I don't speak for anyone other than myself... but in a nutshell... hopefully things bounce back in 2021.  There's still plenty of time to see if that will happen. 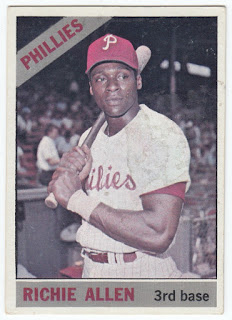 1960 Topps #80
In the meantime, it's nice to read blog posts that focus on the positive.  And last week, John over at Johnny's Trading Spot did just that when he wrote an informative post about the good stuff that happened in 1966.  I wasn't around yet... but I enjoyed learning some interesting facts. 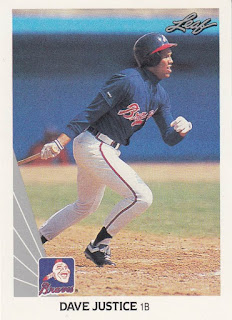 1990 Leaf #297
I don't want to spoil things for you, but did you know that David Justice was born on the exact same day as a hall of fame teammate of his?  If you want to find out who it was... click the link above.
#4:  Bust Out the Champagne 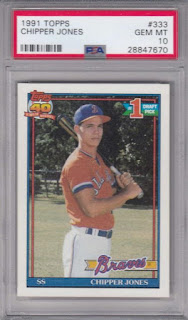 1991 Topps #333
It's no secret that Greg over at Night Owl Cards is a talented writer.  His blog posts are always well written... which is why Beckett hired him.  I can still remember running out and grabbing the February 2019 issue of Beckett Vintage Collector in order to read his article on the 1976 SSPC set.  Two years later, his article on the 1991 Topps baseball set is the cover story for the March issue of Beckett Baseball.  Congratulations Greg! 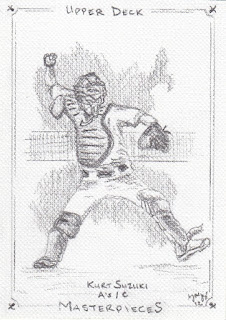 And AJ over at The Lost Collector just celebrated his 10th Anniversary this past Wednesday.  He's known for being the #1 Tino Martinez collector among our blogosphere.  He's also quite the artist.  A few years ago, he sent me this Kurt Suzuki sketch card for my collection.  Congratulations AJ!
#5:  A Super Strata Collection
Brian's Andrew McCutchen collection is insane.  Seriously.  It's like something you'd see featured in Beckett Baseball.  Maybe it has?  Anyways... earlier in the week he showed off his collection of 2015 Strata Cutch cards and it left me speechless.  Please.  Click here and check it out. 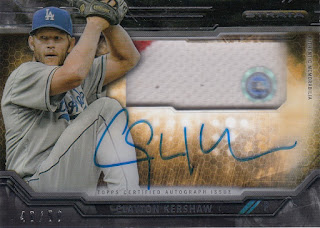 2015 Strata Clearly Authentic Autographed Relic #CAAR-CKW
I only have a handful of 2015 Strata cards... which is headlined by this Kershaw autograph that features a sliver of red patch on it.
#6:  A First for Topps

1993 Topps Black Gold #8
Two days ago, Crazie Joe showed off some 1993 Topps Black Gold inserts on his blog.  It made me start wondering if they were the company's first randomly inserted "inserts".  I'm not talking about the Topps Posters or Game cards they produced in the 60's.  I'm pretty sure they were included in all packs or packs from specific series of cards... sort of like the Glossy All-Star inserts from the 80's found in rack packs.
Does anyone know of any earlier randomly inserted inserts produced by Topps?
Okay... I'm approaching the three hour mark and don't really want to spend the entire morning of my first day on break writing this blog post.  But I still have a few more blogs I'd like to highlight from this past week...
#7:  Sunset Cards 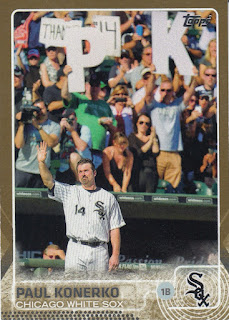 2015 Topps Gold #177
Do you enjoy "sunset cards"?  If so, click here.  Nick over at Dime Box Cards has been building teams of his favorite "sunset cards" based on the divisions in baseball.  This week he targeted the AL Central.
#8:  Top 5 Quarterbacks
On Super Bowl Sunday, John over at John's Big League Baseball Blog ranked his Top 5 QB's.  I wasn't sure if he meant his favorite quarterbacks or the best of the best, but you can check out his list by clicking here. 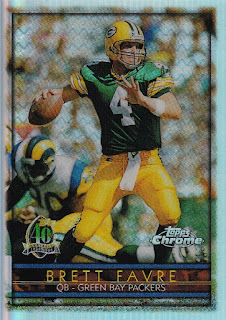 1996 Topps Chrome Refractor #145
My original plan was to list out my Top 5 today... but I'm a little short on time.  So for right now... I'll just show off my favorite QB of all-time: Brett Favre.
#9:  A Friendly Reminder
Chris over at The 1993 wrote another fantastic post where he discussed the 1993 #2 draft picks from each of the major sports.

1996 Pinnacle Laser View Inscriptions #NNO
1994-95 UD Be A Player Die-Cut Autograph #S188
Two of the athletes mentioned in his post (Rick Mirer and Alexandre Daigle) reminded me of a time when I enjoyed collecting draft busts.
#10:  Other Collectibles
Although 99.5% of the blogs I subscribe to are card related, I actually really enjoy reading posts that venture outside of our hobby.  On Tuesday, Gavin over at Baseball Card Breakdown wrote about the glow-in-the-dark Spider-Man Funko Pop he purchased.  He also showed off a pair of action figures too. 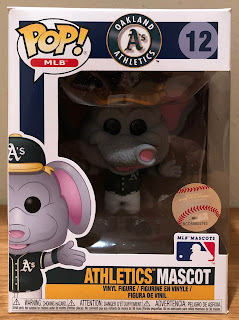 I went through a Funko Pop phase a few years ago, but have cut down my acquisitions due to lack of storage space.  That being said... I still will buy action figures every now and then.
Well... that wraps up another This Week in Blogging post.  Here are a few questions for you to ponder:
Do you have a favorite Topps Rookie Cup card?
Do you have a favorite "sunset card"?
Who do you think is the greatest quarterback of all-time?
Do you have a favorite quarterback?
When you think of draft bust... what names pop into your head?
Do you own any Funko Pops or action figures?  If so, do you have any favorites?
In the meantime, I'm gonna dive back into my office and start digging through boxes and look for some cards to blog about.
Happy Saturday and sayonara!
Posted by Fuji at 3:00 PM