A long time ago in a neighborhood not that far away... 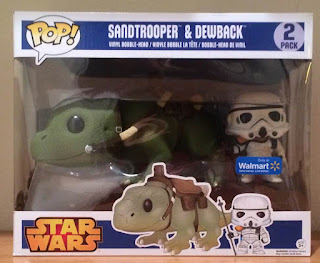 A five year old boy opened his first pack of trading cards that commenced a lifelong addiction to hoarding items most people would classify as rubbish.

Thirty-three years later, he'd create a blog to document his hobby experiences and interact with hundreds of fellow collectors who share his passion.  Based on most of his posts and what he shares on the blog, it's easy to identify his love for sports.

However... only his diehard readers and close friends know his other obsession.  The one that focuses around a super duper awesome, science fiction space soap opera which has the Rebel Alliance battling the evil Galactic Empire.  The same obsession that originated with that first pack of trading cards back in 1977.  Using your context clues, have you figured out what I'm referring to?

The little boy didn't only collect the trading cards.  He was also infatuated with the space ships and action figures produced by Kenner back in the 70's and 80's.

Eventually that little boy grew up and stopped playing with those toys.  His mother gave them away and he moved onto bigger and better things:  sports memorabilia.

But deep down inside... he still loved the greatest movie franchise ever.  Over the course of three decades, he made sure to set aside time to watch the original trilogy... and yes... even the prequels.

These days... that little boy is all grown up.  He's now in his forties and believe it or not, he still treasures his Star Wars trading cards.  Over the years, he's even gone out and picked up a few of those action figures from his childhood days.

In addition to those vintage toys, he's discovered this generation's version of Beanie Babies:  Funko Pops.  Yes.  He fully understands that one day these overproduced pieces of plastic will be worth a fraction of the value originally spent.

But unlike Beanie Babies... the five year old boy trapped inside the body of a forty-three year old man actually thinks these look cool when displayed in his classroom.  And that's why he's okay with his newfound addiction.

Happy Friday and may the force be with you!
Posted by Fuji at 3:00 PM

Awesome pieces! As always, I love the Fett most.

Also, have you heard about Machete Order regarding watching the series? I was reading the main article on it the other day - they advocate watching the series in 4/5/2/3/6 order on first watch and retwatches. Maintains the father spoiler and lets 2/3 act as a nice extended flashback that actually builds off of 5 and leads nicely into 6.

Anyways, figured I'd mention it!

I love those Funko figures! Just wish the Star Wars ones weren't bobble heads. May the Force be with you Fuji!

I had Star Wars wallpaper in a section of my bedroom...and it's still there.

Nice! These are pretty cool

I have started to look in to the Funko figures, some are pretty cool and I would love to add the Star Wars ones to my collection.

I'm glad to see I'm not the only one that has the Funko fever...tonight, I saw a dual pack with Jabba and Lei (in the slave bikini!) at Walmart and almost bought it, but I didn't have an extra $30. I subscribe to Marvel Collector Corps, which sends me Funko exclusives every two months (only available through the subscription). I know they have a Star Wars equivalent called Smuggler's Bounty (that may be where you got the chrome Phasma). If not, you might look into it!

spastik - never heard of that order, but i'll keep that in mind the next time i run through the series (which is about once a year).

tim - not sure why they make some bobbles and others non-bobble. oh well... kept mine in the packages (actually like the way they look displayed in the boxes). if the collection gets too big, then i might pull them out to conserve space.

swing and a pop-up - that's awesome. star wars wallpaper would have went perfectly with my bed set.

sport card collectors - they are... but be warned... they're addicting and take up a lot of space

j. meeks - yeah, i subscribed to the smuggler's bounty. need to go out and find the other
tie fighter pilot. they gave each subscriber two of the three they created for the box. my walmart doesn't have any jabba's left... otherwise, i would have grabbed one.

Soooooooo Where's Rey!? I've been reading lots of articles stating that there is some dark side working and there is no Rey figure anywhere. Not on LEGOs, not as Action Figure..really!? I want a Rey figure!
May the Force be with you my friend.

Ana... you're in luck. There are a few Rey figures and a Funko Pop to choose from:

Thank you! Will try get one for my b-day!

My problem is the Mystery Minis... I'm addicted to the Nightmare Before Christmas and Science Fiction minis whereas my Wife is addicted to the Horror Pop and Walking Dead series.

I lean toward the minis as they take up less room, though I do have several Pop! figures as well. My wife got me a full year's subscription to the Smuggler's Bounty, the first came with an exclusive Captain Phasma, the Tie Fighter Pilot, and an exclusive Star Wars First Order Storm Trooper Pop t-shirt!