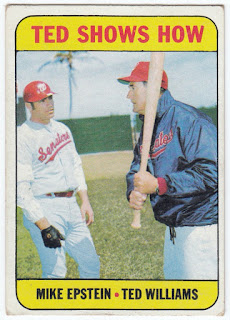 Ted Williams might have been one of the greatest hitters of all-time, but his managerial career wasn't quite as stellar.  That being said... he definitely made an impact on his players. 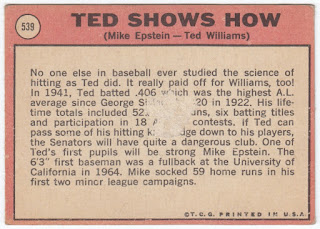 1969 Topps #539
Mike Epstein entered the 1969 season with a career .229 batting average, but his first year under Williams tutelage, he hit a career high .278 and 30 home runs.
Another player that significantly improved was Frank Howard.  Last year I read a very interesting tidbit over on Horizontal Heroes about how Williams told him to lay off bad pitches which impacted his walks:strikeouts ratio.
Howard went from leading the league in strikeouts (in 1967) to leading the league in walks (in 1970).  Before The Commish's post, I was familiar with Howard's career... but hadn't heard his nickname:  The Capitol Punisher.  How sweet is that?  It's definitely one of the coolest nicknames in baseball.
I loved it so much, after reading his post I immediately headed over to COMC and picked up this autograph: 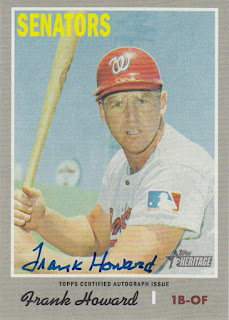 2019 Topps Heritage High Number Real One Autographs #ROA-FH
The card back mentions that Howard broke Babe Ruth's record by hitting 10 home runs in one week during the 1968 season. 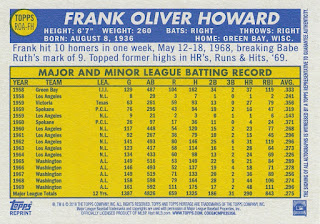 According to The Guinness Book of World Records, he still holds the record.
Like Epstein, Howard hit the most home runs of his career in 1969 and matched his career high in batting average as well.

1972 Topps #510
Why this post, right now?  Well... this past Sunday was the anniversary of Williams signing a five year contract to manage the Washington Senators.  He only fulfilled four of those five years before quitting at the end of the 1972 season.

1970 Topps #211
But he left behind a legacy as being the only Senators manager to have a winning season (1969).  That year, he won the AL Manager of the Year Award.  Unfortunately it's easy for this piece of hardware to get lost in the shuffle when it's sitting in the trophy case of one of the greatest hitters of all-time.
Today's question of the day:
Who do you think has the coolest nickname in MLB history?
In addition to The Capitol Punisher and The Splendid Splinter... I really love these nicknames:
The Human Rain Delay: 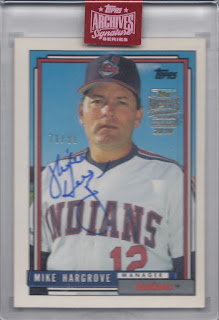 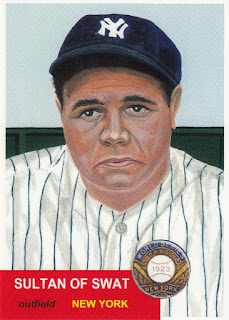 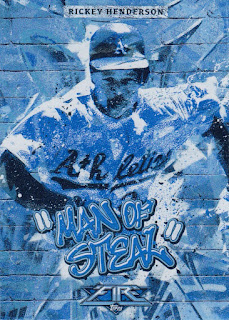 2017 Topps Fire Monikers Blue Chip #M-4
The Chairman of the Board:

1977 TCMA Renata Galasso #25
But I think if I had to pick a personal favorite, it would be: 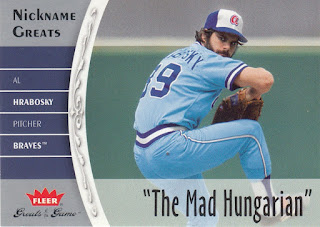 2006 Fleer Greats of the Game Nickname Greats #NG-AH
If you don't believe in mind over matter or the power of facial hair, then you're not familiar with Al Hrabosky.  This guy would psyche himself out and mentally become the biggest, baddest, beard yielding guy on the mound.
Well that wraps another post.  Happy Tuesday and sayonara!
Posted by Fuji at 3:00 PM