During the 70's, no MLB team had more wins than the Cincinnati Reds.  They made the playoffs six times, participated in the World Series four times, and won it twice. 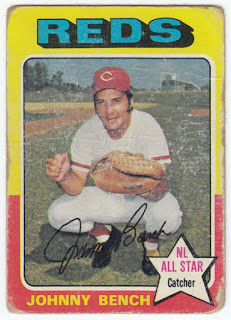 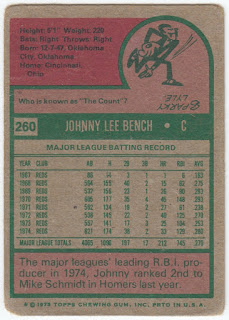 1975 Topps #260
One of those seasons was 1975.
Anyone familiar with the Big Red Machine knows that Sparky's lineup was stacked with guys like Pete Rose, Joe Morgan, George Foster, Tony Perez, Johnny Bench, and Ken Griffey.  The starting rotation might have lacked notable names, but it did manage to have six starters with 10 or more wins. 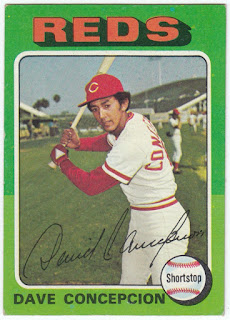 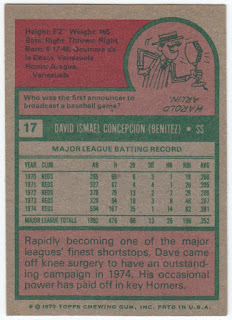 1975 Topps #17
Part of their success on the mound has to do with having several guys around them who were defensive gems.  Manning the corners... Rose and Perez both finished within the Top 10 in regards to fielding percentage.  While up the middle... Bench, Morgan, Dave Concepcion, and César Gerónimo won Gold Glove Awards for the Reds that season.
Talk about defense winning championships.  Wait.  That's a football quote.
Well... I just so happen to have another pair of 1975 Topps cards for you that feature two gentlemen known for their defensive play on the gridiron: 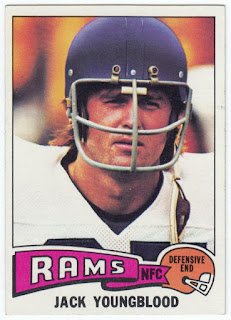 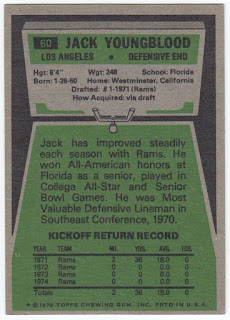 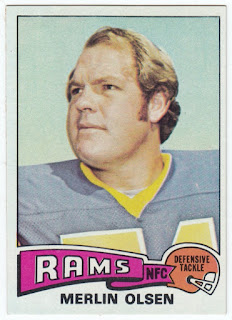 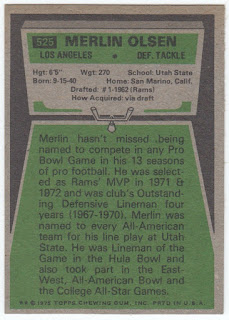 1975 Topps #525
Much like the Cincinnati Reds, the 1975 Los Angeles Rams were pretty solid in regards to defense.  They had five defensive players make it to the Pro Bowl that season.  Jack Youngblood and Merlin Olsen were two of them.
If you're wondering why I would try to compare apples to oranges with this post... it's because I love me a good old-fashioned Blog Bat-Around.  They're always fun and encourage interaction among fellow bloggers.  Plus they provides me with one less blog post idea to come up with.
Two weeks ago, Ryan over at Japanese Sumo Wrestling Cards and Menko kicked off a "Living" Blog Bat-Around.  The premise is simple, a PWE with two 1975 Topps football cards (see above) is passed around the blogosphere.   When you receive it, write a post incorporating the two cards, sign the Card Savers, then place the cards in a new PWE, and ship it off to the next participant.
Worried about postage?  Ryan has you covered.  He included a bunch of Forever stamps.  All you need to do is provide a new PWE and:
1.  Sign up on his blog.
2.  Wait until the cards are shipped to you.
3.  Write a post. 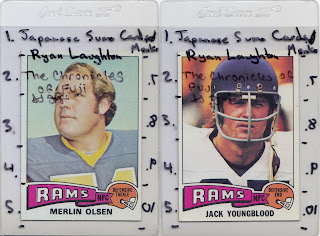 4.  Sign the Card Savers.
5.  Toss them into a new PWE and ship them out to the next blogger.
When everyone has had the opportunity to write their post, the last blogger will ship the cards and the signed Card Savers back to Ryan.  At that point, he'll summarize the BBA and has even tossed around the idea of auctioning off the cards and donating the proceeds to a charity.
So... who's interested?  I know Jon (A Penny Sleeve For Your Thoughts) and Adam (Infield Fly Rule) have both signed up.  Let me know who wants to be next and I'll ship them out this week.
The rest of you should head over to Ryan's blog and sign up by clicking here and leaving a comment on his post.
Well that's it for today.
Happy Thursday and sayonara!
Extra Innings 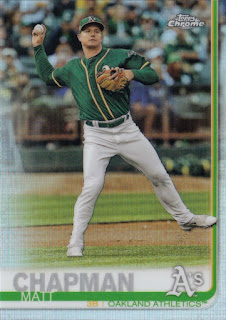 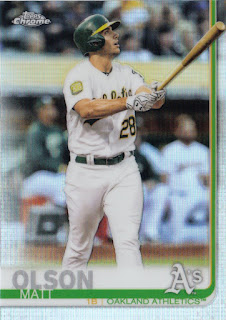