The news about people being stuck at home, the loss of power, numerous traffic accidents, and the impact of freezing temperatures around the country was heartbreaking.  It honestly put a lot of things into perspective for me.  That's why I thought I'd start things off by stating that I hope all of you are able to stay safe and reasonably warm.
Hopefully some trading cards and blog posts will help distract some of you who were impacted by Mother Nature personally this week.  So let's dive into This Week in Blogging...
#1:  Let's Celebrate 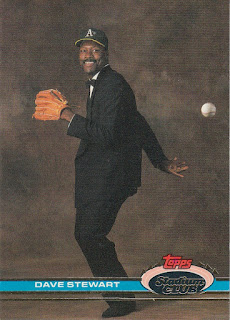 1991 Stadium Club #1
Figured I'd try to start off with some happy news and wish Dime Box Nick a happy 29th birthday!  He celebrated his special day by ranking his Top 5 Dave Stewart cards.  Stewart shares the same birthday as him and happens to be one of my favorite 80's pitchers.  If you want to see which cards made his list, click here. 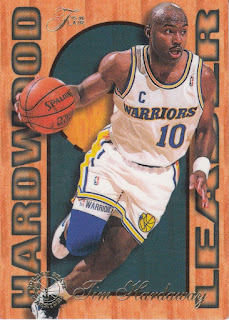 1995-96 Fleer Flair Hardwood Leader #9
Oh and I almost forgot... Billy over at Cardboard History just celebrated 25 years of being an NBA fan.  Congratulations Billy!  He mentioned that 1995-96 Fleer Series 2 was the first pack of basketball cards he opened, so I dug into my binders and this was the first card from that set I found.  Although... technically these Hardcourt Leaders inserts were in the Series 1 packs.
#2:  Factory Team Sets
On Monday, The Shlabotnik Report featured a great post breaking down the 2012 Topps New York Mets factory team set, which offered player photo variations and unique numbering.

2017 Topps Yankees Factory Team Set #NYY-16
I've purchased a few of these Topps factory teams sets over the years, because I enjoy the rookie card variations that are sometimes offered.
#3:  The Real Sam Malone 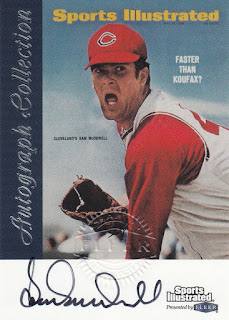 1999 Fleer Sports Illustrated Autograph Collection #NNO
On Monday, Matt over at Cards Over Coffee showed off the Ted Danson signed photo he recently acquired in a trade.  He talks about a few of the television shows and movies that Danson has appeared in over the years.  The one that stood out to me was Cheers, because it was one of those 80's television shows that I'd watch with my mom as a kid. 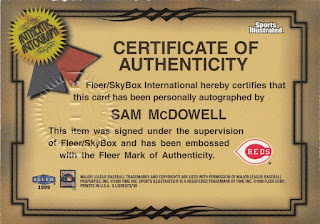 Sam Malone (Danson's character on Cheers) was inspired by a real MLB pitcher from the 60's and 70's:  Sam McDowell.  According to this article, McDowell struggled with alcoholism... but later turned things around and became a substance abuse counselor for a few MLB teams.
By the way... anyone else notice the error on the back of the McDowell card?  He never played for the Cincinnati Reds.  That being said... I've confused those old Cleveland hats with Cincinnati hats more than a few times myself.
#4:  Two Hobbies Unite

2003 Topps Gallery Currency Connection #CC-WM
In celebration of President's Day, Collecting Cutch showed off some fantastic coin cards on his blog.  I've always been fond of these collectibles that combine two popular hobbies into one. 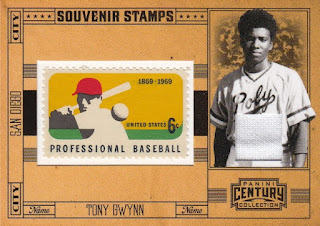 2010 Panini Century Collection Souvenir Stamps #45
The same thing can be said for stamp cards.
#5:  The Big Hurt in Oakland
Peter K. Steinberg featured a sunset card of Frank Thomas over on Baseball Every Night earlier in the week.  I'm a huge fan of the guy and love it when I see him wearing Green & Gold.  Figured I'd share one of my cards as well: 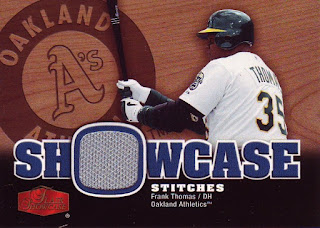 2006 Flair Showcase Stitches #SS-FT
I'm always looking for an excuse to show off one of my Frank Thomas A's cards.
#6:  Check the Back 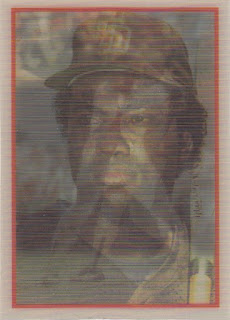 1987 Sportflics #31
If you own some 1987 Sportflics, you might want to flip them over and check out the copyright date.  If it says 1986, then you have a factory set version, while the ones with 1987 were pulled from packs.  Looks like the Gwynn sitting in my binder came from a pack: 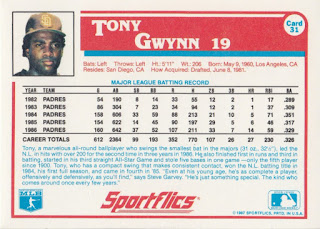 By the way... I learned this little variation tidbit earlier in the week over at Kerry's blog: Cards on Cards.
#7:  My 1st 2021 Gwynn
A lot of bloggers have written their 2021 Topps flagship reviews and check out my blaster posts.  I personally haven't seen or looked for any blasters myself, but I'm sure it's only a matter of time before I get my hands on some singles. 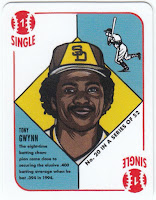 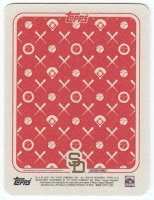 2021 Topps Blake Jamieson 1951 Topps #20
In the meantime, a post over on Wrigley Wax reminded me that I actually own a few 2021 Topps trading cards.  It's from the Blake Jamieson 1951 Topps online set that was released a few weeks ago.  I picked up the Week 2 box, because it included a bunch of players I collect including the Gwynn you see above.
#8:  Other Sports
As much as I enjoy collecting baseball cards, I actually enjoy reading non-baseball card related blog posts almost as much. 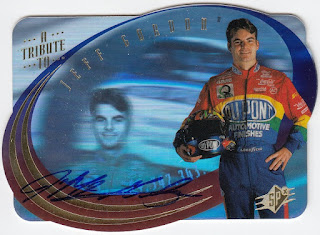 1996 SPx Tribute Autograph #T1
Paul over at Card Boarded  (a hockey card blog) announced earlier in the week that he's going to start collecting Jeff Gordon cards.
And Billy over at Cardboard History wrote a nice post about Jarome Iginla in honor of Black History Month.  He mentioned Iginla's interest in diabetes even though he doesn't suffer from it. 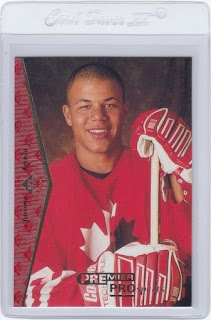 1994-95 SP #181
Anyways... seeing his name reminded me of the days of busting packs of 1994-95 SP searching for Sergei Samsonov rookie cards.  These packs also contained one of Iginla's rookie cards too.
#9:  Movie Mania
If you're into watching movies... then you should check out Elliptical Man's new blog series:  Film Friday.  It's a series where he'll be giving his readers 100 movie recommendations.
Yesterday was the first post in the series and the topic was Books & Plays.

1991 Starline Hollywood Walk of Fame #143
It wasn't featured in his post, but the first movie that popped into my head was To Kill a Mockingbird which features Gregory Peck. 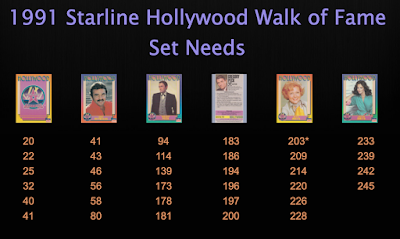 By the way, this week I opened up two boxes of 1991 Starline Hollywood Walk of Fame and combined with a stack of singles I purchased at the flea market... I was almost able to produce two starter sets.  I know this is a long shot, but if anyone has any singles from this product laying around here are the 35 cards I still need.  I have a ton of duplicates available for trade.  Collation was terrible.
That wraps up another This Week in Blogging post.  As much as I enjoy and appreciate the number of views each of these posts receive, I'm thinking about scaling them down.  Between the research, writing, and digging up cards from my collection... these posts end up taking up a large portion of my Saturdays.  And in this day and age... rest and relaxation is something my mind and body needs for mental health purposes.
Happy Saturday and sayonara!
Posted by Fuji at 3:00 PM