The older I get... the less social I become.  I started down this path as I transition into my 30's.  That's when I lost the desire to meet up with friends at the local dive bars, attend concerts, or go to other large social gatherings like weddings and Christmas parties.
Upon self-reflection, I think it has to do with feeling burnt out after trying to accumulate as many friends as I could in high school and even college.  These days... it's all about quality over quantity when it comes to friendships.
Without getting to deep into my personal life... I'll just say that I can count on my two hands the number of friends I consider to be a part of my inner circle.  Sprinkle in my immediate family and I have plenty of social and emotional support to last a lifetime.
Then there's the collecting community.
I'm exactly the opposite when it comes to all of you.  I enjoy reading and commenting on your blogs.  Plus at this point, I don't think I would write four posts a week without the interaction with all of you.
It's actually kind of weird how social I am among the blogosphere compared to my "personal" life.  Maybe it has to do with the fact that we're not meeting face to face and in a sense... I'm hiding behind a keyboard.  Actually... that's not entirely true.
I've actually had the pleasure of meeting up with several bloggers over the years: Dan @ The Other World, Brady @ St. Louis Cardinals' Cardboard, Ryan @ Japanese Sumo Wrestling Cards and Menko, and Rod @ Padrographs.
I only met Dan once, but that might change after the pandemic ends and we're able to attend card shows again.  Brady and I used to meet up once or twice a year at the Serramonte Mall Show, but it's been at least two years since we've sifted through dime boxes together.  Ryan and I have hung out twice: once in Southern California and once up here.  He's also the only blogger I communicate with on a regular basis and we're hoping to hit up another card show at some point in the future.
And then there's Rod.  A few years ago, one of my best friends moved up to Portland and ever since I typically visit her at least twice a year (well not since the pandemic).  Anyways... two summers ago... I reached out to Rod and met him at the bookstore he used to run.
In fact there are a bunch of bloggers up in the Pacific Northwest:  Rod, Gavin @ Baseball Card Breakdown, Kerry @ Cards on Cards, and Kevin @ The Diamond King.  The goal is to one day make it back up north and eventually have a little blogger gathering with those guys.
In the meantime, Rod manages to stay in touch through the mail.  Two weeks ago, he sent out a very thick bubble mailer containing a ton of cards including my two prizes from his recent contest: 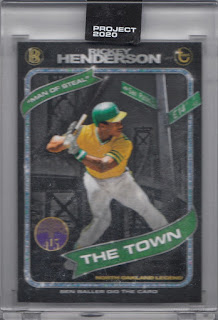 Topps Project 2020 #71 (by Ben Baller)
His contest utilized a draft format and I was awarded two picks.  He had a ton of cool prizes to choose from including ten to twenty different Project 2020 cards. 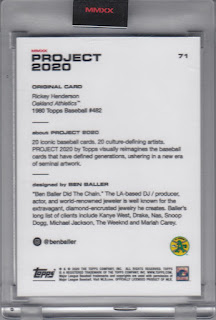 I used my first pick on this Ben Baller rendition of Rickey Henderson's 1980 Topps rookie card. 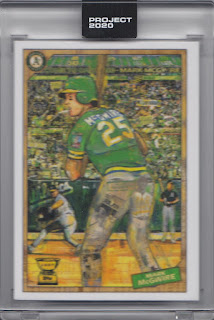 Topps Project 2020 #97 (by Andrew Thiele)
There were a bunch of interesting cards, including a variety of autographs and a Willie Mays card by Sophia Chang... but ultimately I went with this McGwire with my second pick. 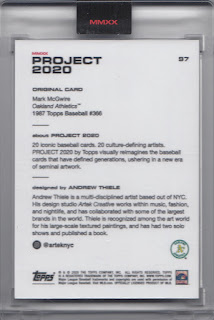 I selected this card, because up until now I've been focusing on Gwynn and Henderson Project 2020 cards and ignoring Big Macs (outside of the Blake Jamieson).
Rod also tossed in a bunch of bonus items including this Dave Stewart custom he had autographed at a private signing:

On Tuesday, I listed my favorite Black MLB players and Stew made the Top 5.  He never pitched for the Padres, but he was their pitching coach during their last trip to the World Series in 1998.
Rod opened a bunch of packs for Christmas, including a ton of 2020 Allen & Ginter... which is a set I've been working on.  He helped me with three of the non-sports insert sets I'm building: 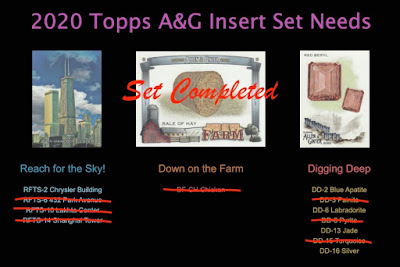 This chicken completed my Down on the Farm set: 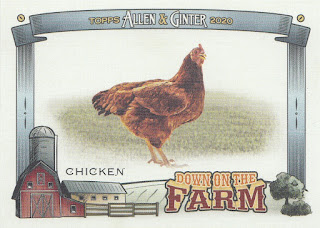 2020 Topps A&G Down on the Farm #DF-CH
He also got me six steps closer to wrapping up the Reach for the Sky! and Digging Deep insert sets: 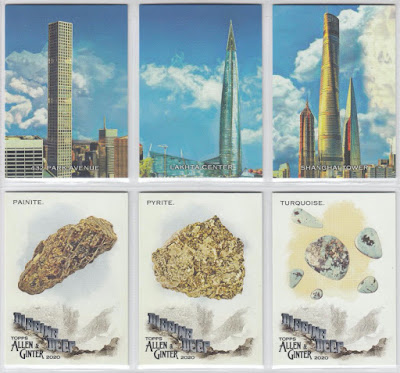 Next up are some singles for my Japanese and Oakland A's PC's: 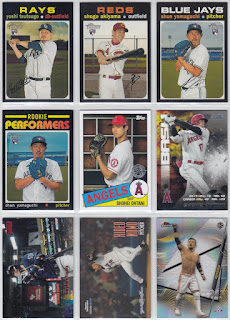 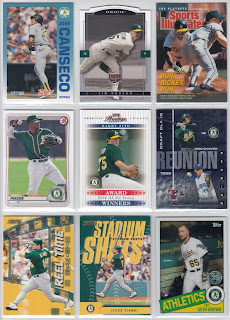 And rounding out Rod's generosity are two memorabilia cards that inspired me to open up about my social life inside and outside of the hobby: 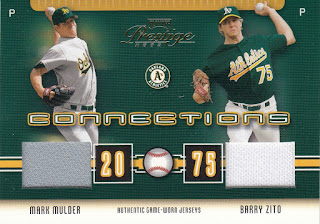 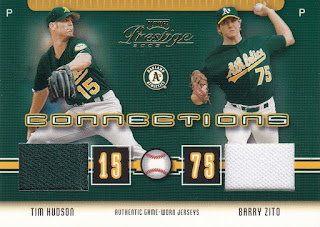 2003 Playoff Prestige Connections Materials #C-48 (#'d 042/400)
If you talked to my closest friends or family members, they'd most likely tell you how I like to keep my inner circle small and they wouldn't be lying.

But it's really nice to have an outlet like my blog and this hobby, because it's allowed me to make a lot of connections with other people who enjoy collecting pieces of cardboard with pictures of pitchers, chickens, and artwork on them.
Thank you Rod for this very generous prize/care package!  And thank you to each and every one one of you who has taken the time to read any of my posts and connecting with me by leaving comments.  They're truly appreciated.
Happy Thursday and sayonara!
Posted by Fuji at 3:00 PM