Four Guys Walk Into a Ballpark

1982 Fleer #640
Outside of walking into a ballpark and playing baseball, what do these four guys have in common?  If you know the answer... then you are quite the baseball guru.  If you don't... stick around and you'll find out.
According to Wikipedia, all four of these gentleman were replacement players during the 1994-95 MLB Strike.  However discussing unions is like talking about politics... so I'll go in another direction with this post.
Yesterday I received a package from Panini containing this card: 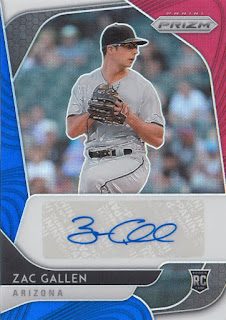 2020 Panini Prizm Rookie Autographs Red, White, and Blue #RA-ZG (#'d 40/50)
Four years ago, I pulled an expired redemption card out of a box of 2014 Panini Prizm Draft Picks for a Michael Conforto autograph.  After waiting patiently... the Conforto never arrived.   I finally shot Panini four emails to four different people back in early November of last year inquiring about the status of my card.  And after going back and forth with Chase Henderson... I received confirmation that a replacement would be shipped.
Replacement Player:  Zac Gallen 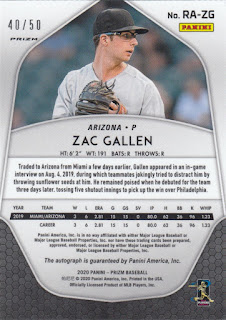 Gallen is a young pitcher with the Arizona Diamondbacks.  The good news is he looked good during his first two seasons in the Bigs.  The bad news is he plays in the same division as the Dodgers and Padres.  I guess we'll look back on this replacement in a few years and see how things panned out.
As for the Conforto autograph... I'm kinda bummed he never signed his cards.  Last season he finished 7th in the National League in batting average and was named to the 2020 All-MLB Second Team.
Now that I know I won't be receiving a signature from Panini... I'll probably try to pick up a cheap one for my collection.
Until then...
Any thoughts or comments on Dennis Boyd, Lenny Randle, Shane Spencer, Pete Rose Jr., Zac Gallen, or Michael Conforto?
I'd love to hear from any Diamondback fans out there who are familiar with Gallen... and whether or not you're excited about his future with your team.
And oh yeah...
Did any of you know that those four guys were replacement players?
Happy Tuesday and sayonara!
Posted by Fuji at 3:00 PM