Another crazy week.  Last Saturday the earth started shaking here in the Bay Area.  It wasn't anything crazy (4.2)... but it felt like a car crashed into the house.  Honestly... I like to think that these medium sized earthquakes relieve some of the pressure building up along the faults.  If this is inaccurate... please don't tell me.  It's my way of coping.
Some of the other events will be featured in today's This Week in Blogging post...
#1:  Most Obscure Player You Collect
Last Sunday, Daniel over at It's like having my own Card Shop wrote about his Tatman PC and asked his readers who is the most obscure player we collect.
My childhood buddy was the first person I thought of.  Unfortunately he only has that one trading card that I wrote about here.  Then I started thinking about guys I actively search for... and that's why I felt Kurt Suzuki was a better response to his question. 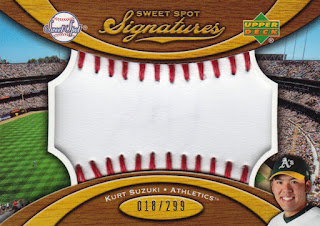 2007 Sweet Spot Signatures #SS-KS
I realize he's not exactly unknown... but he's not exactly a superstar either.  Plus... I get to use this topic to show off my "obscure" signature of his.
#2:  More Than a Toy
I realize most of the people who take the time to check out my blog could care less about Legos, but I really, really, really encourage you to check out Nacho Grande's Lego City:
Chris also has a second blog dedicated to Legos.  If you're interested... click here.
Although trading cards are hands down my favorite thing to collect... I do enjoy picking up a new Lego set every now and then.  My latest Lego addition was actually a Christmas present from another one of my childhood buddies who hooked me up with a very generous Amazon gift card, which I used to purchase this: 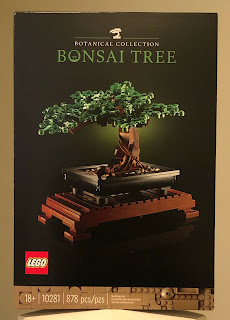 Lego Set #10281 Bonsai Tree
I haven't sat down to build it, but I'll show it off in a blog post as soon as I do.
#3:  Another Bonds Collector
It's nice to see more and more collectors chasing Barry Bonds cards.  Back in October, Daniel announced his quest to collect 762 unique Bonds cards.  On Monday The Diamond King showcased the Barry portion of his Steroid Project.
I enjoy collecting his cards too.  I went through my binder and scanned three of my favorites: 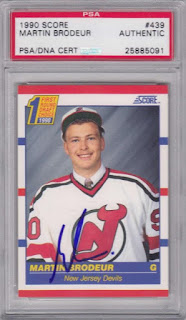 1990-91 Score #439
I rarely showcase hockey cards on this blog anymore... but Chris wrote a post on Monday that gave me a reason to post this signed Brodeur rookie card.  If you enjoy collecting hockey cards or reading hockey related posts, please check out his blog.
#5:  Sweet 60's Sampler and Don Sutton
If you're a fan of 60's baseball cards... I encourage you to head over to cards as i see them and read Jim's post.  He shows off one Topps card that represents every year from 1960 to 1969.  I'll probably borrow this idea at some point.  Until then... here's a 1968 Topps card from my collection:

1998 Donruss Significant Signatures #NNO (#'d 0091/2000)
I mostly remember pulling his Milwaukee Brewers and California Angels cards back in the 80's, but his best years were obviously with the Los Angeles Dodgers... which is why I encourage you to check out Jim and Greg's tributes.
#6:  The First King
Before you flood the comments with responses involving Sadaharu Oh or Babe Ruth and all of the other home run kings that preceded him... let me clarify something.  Hank Aaron was the MLB Home Run King when I started following baseball and collecting cards... and that was pretty significant to me.

1983 Donruss Hall of Fame Heroes #34
After thinking about it... I'm pretty sure the first Aaron card I ever owned was his 1982 Kmart MVP card.  But his 1983 Donruss HOF Heroes card was probably the first I actually pulled from a pack.
I'm planning on showcasing a few of my favorite Hank Aaron collectibles later this week, but in the meantime I encourage you to check out any or all of the following blogger tributes to Hammerin' Hank:
Padrographs
Johnny's Trading Spot
Run-Fore!-Kelloggs Baseball Cards
Collecting Cutch
The Diamond King
Night Owl Cards
cards as i see them
Infield Fly Rule Cards
The Lost Collector
Nothing If Not Random
It's like having my own Card Shop
Baseball Cards Come to Life!
#7:  Best of Luck Biden
On Wednesday, I had the opportunity to watch the swearing in of President Joe Biden and Vice President Kamala Harris.  Thanks to distance learning, it was the first time I've had the opportunity to watch this ceremony live in as long as I can remember.
My favorite moment was listening to that beautiful poem written and recited by National Youth Poet Laureate, Amanda Gorman with my homeroom class.  It definitely made an impression on me that will last a lifetime.  Hopefully it made an impact on some of my students as well.
If you're a fan of collecting cards featuring U.S. Presidents, you should head over to Bill's Baseball Card Blog.  He showed off cards featuring all 46 Presidents on Wednesday.  One day, I'd love to pick up the Barack Obama card he showcased.  Until then... here's my favorite card of #44: 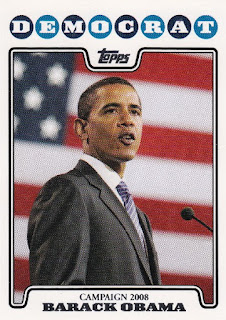 2008 Topps Campaign #C08-BO
#8:  One More Goodbye
Wednesday will be remembered for the inauguration and hopefully a bright and new beginning.  However things weren't only rainbows and butterflies.

2005 Fritsch Packers Police #2
Green Bay Packers and football fans said goodbye to former general manager Ted Thompson who passed away at the age of 68.  Thompson will be remembered for drafting Aaron Rodgers and building the team that won the 2010 Super Bowl.
#9:  Mistaken Identity
Not sure how many of you are familiar with Dub Mentality, but it's one of my favorite card blogs.  Much like Night Owl Cards and Dime Boxes -- The Low-End Baseball Card Collector's Journey... each and every post is well-written and usually has me reminiscing. 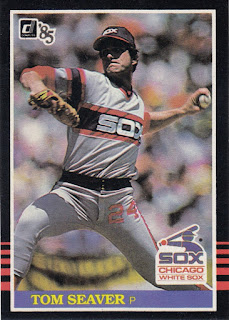 1985 Donruss #424
His latest post features some error cards including some mistaken identities.  I was hoping to show off my 1969 Topps Aurelio Rodriguez card... but then I remembered that I don't own one.  Instead you get Floyd Bannister posing as Tom Terrific.
And speaking of Dime Box Nick...
#10:  2020 Set of the Year
Yesterday he ranked his favorite sets of 2020 which came down to these two sets:

2020 Stadium Club #115
2020 Big League #51
Nick's selections proves that great minds think alike.  These are my top 2 sets as well.  Ultimately he chose Big League as his favorite... and based on the comments many of his readers left... he's not alone.
Personally... I like Stadium Club a little bit more.  Although I will that the photo on Laureano's 2020 Big League card is way cooler than his Stadium Club card.
#11:  An Oldie But Goodie
Are you a fan of 70's oddball issues?  Well... The Lost Collector sure is.  Yesterday he showed off his 1979 Topps Burger King card of Thurman Munson along with a few other BK cards from the 80's and 90's.
It reminded me of the iconic 1978 Tiger's Burger King set which featured individual cards of these three rookies:

1978 Topps Burger King Tigers #15
Collectors might not consider these to be true rookie cards... but I prefer these to the multi-player rookie cards from the 1978 Topps flagship set.
Okay, I've done enough writing.  It's your turn.
Feel free to comment on obscure players, Legos, Barry Bonds, Don Sutton, Hank Aaron, U.S. Presidents, 70's oddball issues, your favorite 2020 baseball card set, or anything else that tickles your fancy down below.
Happy Saturday and sayonara!
Posted by Fuji at 3:00 PM