Stand Up for Your Rights

I've made my admiration for athletes who have chosen to remain loyal to a single franchise their entire career very clear on this blog.  A big part of that has to do with free agency and how it has diminished the number of athletes that fall into that category.
With that being said... I think free agency is a beautiful thing.  I never really understood the finer details until I read this article on Curt Flood a few years ago.  It opened my eyes to how how baseball players used to be the property of the franchise who drafted him.  At that time, their only options were to play their entire career with the franchise, be traded, or retire.
Then back in 1969, Flood refused to be traded to the Philadelphia Phillies and started a chain of events that would eventually lead to free agency.  That's why I decided it would be cool to add his rookie card to my collection. 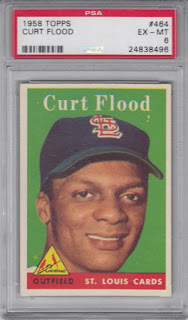 1958 Topps #464
It took me awhile to find the right card for the right price, but I eventually landed this graded copy on COMC back in February of 2020 for $33. 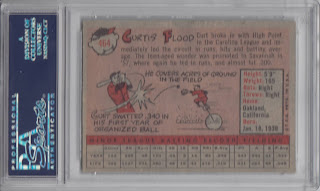 It took a few years, but by the mid 60's... Flood was a perennial all-star and Gold Glove Award winner.  After 15 seasons, he produced numbers many would consider to be worthy of the Hall of Very Good.  But that's just the icing on the cake.  His place in history will always be remembered for standing up to Major League Baseball even though (according to the article) he essentially killed his career.
Yesterday, Mr. Flood would have celebrated his 83rd birthday... and tomorrow is the 24th anniversary of his death.  Happy belated birthday Mr. Flood!
Happy Tuesday and sayonara!
Posted by Fuji at 3:00 PM