A PC of a Guy I Don't Actively Collect

People who read this blog generally know my favorite teams and the players I actively collect.  But there are plenty of athletes in my personal collection that I fail to mention on this blog.
Hank Aaron is one of those guys.
It's probably because I don't actively seek his cards.  But that doesn't mean I haven't purchased some really cool collectibles featuring him over the years.  The bottom line is he's a legend.  When I started collecting cards back in 1981, I was also becoming a really big fan of the game of baseball too.  A big part of both of those things had to do with my love for numbers... which is why I've been fascinated by baseball statistics since the very beginning. 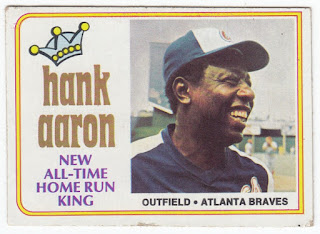 1974 Topps #1
How does this relate to Henry Louis Aaron?  Well even though I've had a deeper appreciation for high average hitters over home run hitters for as long as I can remember... what nine year old baseball fan doesn't appreciate the all-time home run king?  That's why I've slowly tucked away his cards (and collectibles) as I've encountered them over the years.
And as news of his death quickly spread over our blogosphere, I decided to pull out my boxes and scan some of my personal favorites.  It wasn't an easy task, but I even created a Top 10 list.
But before we get to those... here are a bunch of honorable mentions... 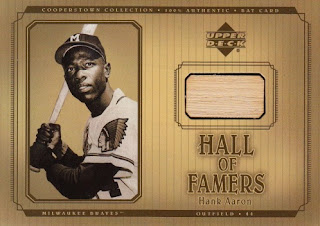 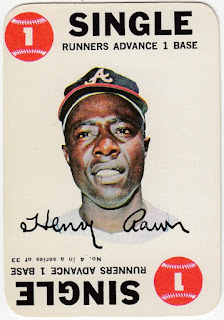 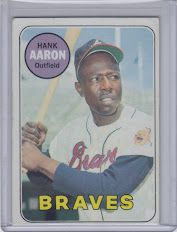 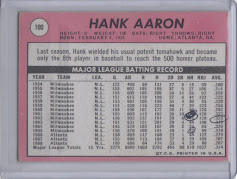 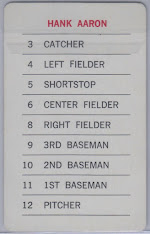 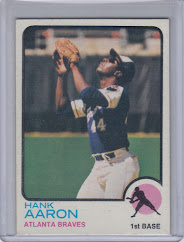 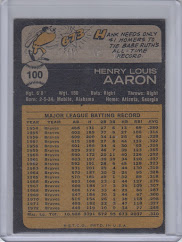 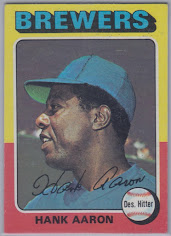 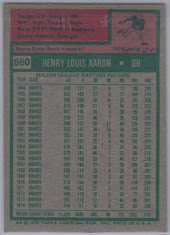 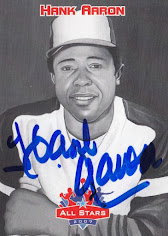 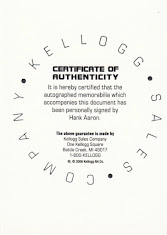 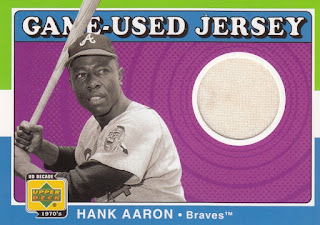 Yeah... I know memorabilia cards aren't for everyone.  But I enjoy collecting them and if you've followed this blog long enough, you know how much I love this product.
#9:  1967 Topps Posters #15 This is the first of two oddball issues from the 60's on this list.  I really like the simple design and the fact that it's printed on newspaper stock.  It definitely has a vintage feel to it.  I also think it's cool that he has his jersey number written on the knob of his bat.
#8:  1966 Topps #215 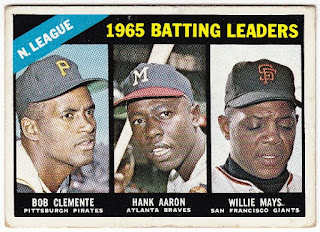 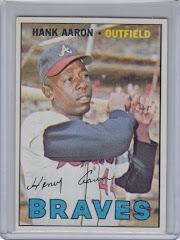 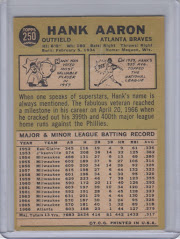 Back in the early 90's, I purchased a few Hank Aaron cards from the card shop I worked at.  One of them was the 1973 Topps card featured in the honorable mentions.  This was another one of those cards.  At the time this was one of the oldest and most valuable cards in the collection.  However it wasn't my favorite.  That honor belonged to the #6 card on this list.
#6:  1972 Topps #299 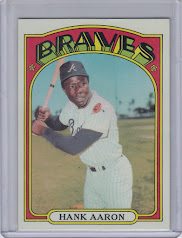 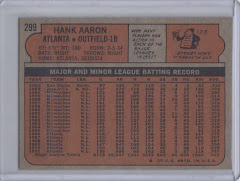 This was one of the other vintage cards I purchased from the card shop I worked at.  I can't remember ever writing about this card before... which is a shame, because it's so darn beautiful.  Plus the 1972 Topps baseball card set will always hold a special place in my collection since it's my birth year set.
#5:  2015 Topps Museum Collection Premium Prints #PP-HA 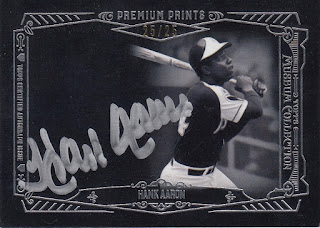 This is one of the most valuable baseball cards in my collection.  For the longest time, I wanted to add a pack pulled on-card autograph of Aaron to the collection, so in 2017 I purchased this card for $125 on eBay.
#4:  1983 Perez-Steel Hall of Fame Art Postcards #177 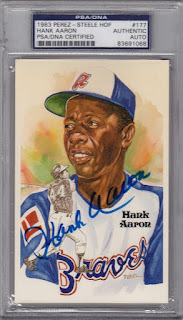 I realize slabbed signatures and oversized items are not popular among many bloggers... but I love this collectible.  It's not my favorite Hank Aaron autograph... but it's pretty darn close.
#3:  1964 Topps Giants #49 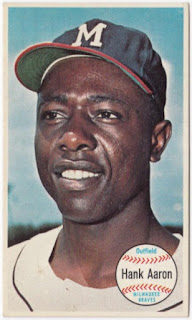 This is the 2nd oldest Aaron collectible in my collection and it comes from my favorite oddball issue from the 60's.  It's such a great looking card.
#2:  715th Home Run 16" x 20" Signed Photo (Steiner Certified) 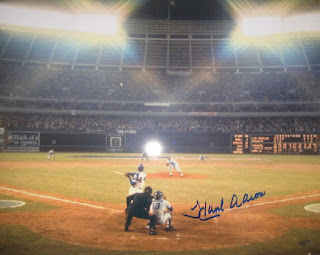 Thanks to an awesome gift card offer, I was able to purchased this photo off of the Steiner website nine years ago for only $117.55 (+ $9.99 shipping).  One day I'd like to have it professionally framed and hang it up in my office.  That won't happen until I move and buy a larger place... which may or may not ever happen.  Until then... I get to look at this photo of my photo. 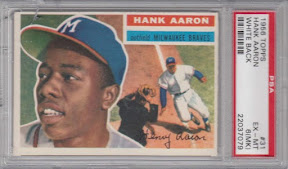 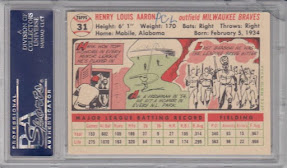 If I have a copy of a player's 1956 Topps card... chances are it's going to be my favorite card of his.  This card actually features two legends... since the player sliding into home isn't Hammerin' Hank.  It's actually the Say Hey Kid.
Well that wraps up my Hank Aaron PC.  Like I mentioned at the start of this post... I'm not actively looking to add any new cards of his to this collection.  But that doesn't mean I won't.  Maybe one day I'll stumble across an affordable graded vintage card from his playing days or a cool looking memorabilia card from the late 90's/early 2000's.  If that ever happens... I'll try to remember to share it on this blog.
Until then...
Do you have a favorite Hank Aaron collectible?
Happy Tuesday and sayonara!
Posted by Fuji at 3:00 PM