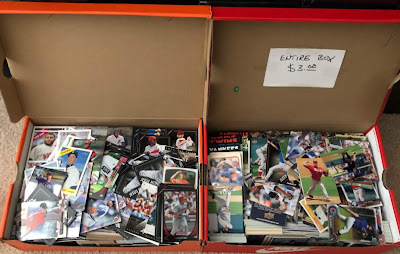 A few weeks ago, I purchased a pair of shoeboxes filled with cards for five bucks.  I'll be honest, there wasn't anything too exciting sitting on top.  However for the price... I determined it was worth the risk.

Well I finally got around to sifting through both of these and I ended up pulling out about 400 cards.

Half of them were these 2017 Bowman Draft Chrome cards: 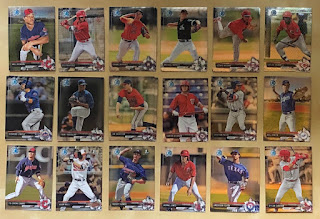 I'm still not sure what to call most of these.  They're like wannabe rookie cards, I guess.  I recognized a few names and figured I'll set them aside.  Maybe one or two of them will become stars.

The other half consisted of a few smalls stacks of Topps Chrome and Topps Heritage base cards from the past five years that I took out for care packages.  There were also twenty-seven singles I pulled out for fellow bloggers.

And then there were The Final Four:


Outside of the Bowman Chrome cards, these are the only four cards I kept for myself.  You know how much I love my 80's rookie cards.  All three of these guys spent time on Beckett's Hot List at one point or another.  These days they're quarter cards at best.  Ultimately there weren't any big dollar cards to be found.  However it was fun sorting through these two shoeboxes and the entertainment value has to be worth the five bucks I spend on them.

Well that's it for today.  Have a fantastic week!