Ugh.  Next week I go back to work.  Don't get the wrong idea.  I love approximately 92% of my job and that includes hanging out with my friends, meeting my new students, and hopefully making a difference in at least of a few of their lives.

But the other 8% wishes I had a few more days off to just sleep in, read blogs, knock out a few posts, grab lunch, take a nap, sort some cards, watch some Netflix, eat dinner, tidy up, check the scores, hit the sack, and then start the process all over again the next day.

The three weeks I had off since late July were plenty entertaining, but not exactly relaxing.  First I went up to Oregon to visit my best friend and her family. 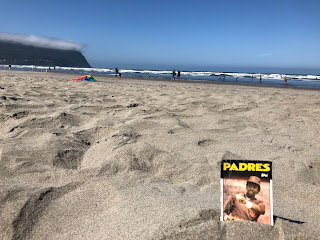 My wallet card finally got a chance to breathe in some fresh air when we took the kids to Seaside Beach, which is about ninety minutes west of Portland.  During that trip I ate a lot of delicious food, bonded with my nieces, and even had the opportunity to meet and hang out with Rod over at Padrographs.  Hopefully I'll be able to meet Gavin (Baseball Card Breakdown) and Kerry (Card on Cards) on one of my future trips.

I flew directly down to Las Vegas to hang out with my dad.  We sat down and had some really deep conversations about life, religion, politics, money, and my mother... with a little bit of sports and food thrown in.  We also went shopping, gambled a little, and went out to dinner for his birthday. 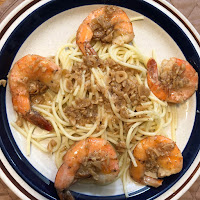 My dad also showed off his cooking skills by making the best shrimp scampi I've ever tasted.  He's been practicing the past few months and there's not a doubt in my mind that my mom would have been proud of him.

After four days of bonding with Papa Fuji in triple digit temperatures, I flew back to the Bay Area.  Which brings us to the road trip mentioned in the title of this post.

The goal was for my buddy Mike and I to hit up a Dodgers game, go to the Frank and Son Collectible Show, meet up with Ryan (aka SumoMenkoMan), hit up some antique stores and card shops, and check out the Rose Bowl Swap Meet.

The good news is we pretty much accomplished most of our goals.  The bad news is this post is running way too long, so I'm going to cut it short.  But not before I share the first day of our three day road trip.

Mike and I hit the road at around 8am and were in the LA County by the early afternoon.  After checking into the hotel and grabbing some food, we headed over to Dodger Stadium to watch the Dodgers host the Arizona Diamondbacks.

Since I don't go to Dodgers games very often, I ended up buying the best seats I could find for under $50 (each).  I was pretty satisfied with our view. 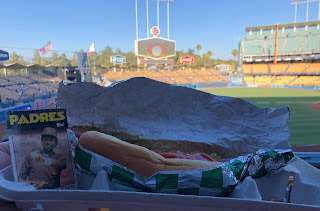 Tony enjoyed it too.  Here he is chilling with my first Dodger Dog in more than two decades. 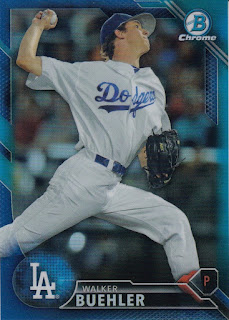 I was hoping to see Clayton Kershaw or Kenta Maeda take the mound, but Walker Buehler was a reasonable consolation prize.  My buddy noticed before the game that he had only walked twenty batters the entire season.  We must have jinxed him, because he ended up walking three more in this game.  Although I was pretty impressed with his ability to get himself out of the jams he put himself into during the 2nd and 3rd innings.

There's a chance we also jinxed the Dodgers, because we left after the 7th inning with the Dodgers clinging onto a 2-0 lead.  By the time we got back to the hotel, Carson Kelly had hit two home runs to lead the Diamondbacks to a 2-3 come from behind win.

In our defense... the game was slower than molasses and it had been a long day on the road.  Plus I wasn't feeling good after devouring the Dodger Dog and some nachos before the first pitch was even thrown.

I'll go ahead and pause things right here.  Stay tuned though.  On Saturday, I'll share Part 2 our road trip which involves hanging out with Ryan, going to two different card shows, visiting a card shop, and checking out some antique stores.

Until then... here is today's question of the day...

When you go to MLB or MiLB baseball games, what percentage of the time do you actually stay for the entire game?

I'd say 40% of the time.  This includes all professional sporting events (ex. Sharks, Earthquakes, A's, SF Giants, and SJ Giants).  If it's a mid-week game during the school year, I never stay the entire game.  However I'll usually get my money's worth if I don't have to work the next day.  It also depends on who I'm hanging out with at the game.  Some of my friends insist on staying the entire game, while others are ready to leave after an hour or so.