Another day.  Another purchase inspired by Henry over at Cardboard Greats.  Last week... or the week before... I wrote about my 1970 Topps Posters set. 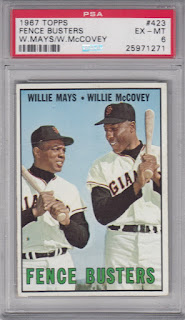 Willie Mays and Willie McCovey are considered one of baseball's greatest home run hitting tandems of all-time.  They spent just over thirteen seasons together in San Francisco and during that time they clobbered a combined total of 801 home runs.  During a span of eight seasons (from 1962 to 1969), the NL Home Run Crown was taken home by one of these guys six times.  The other two seasons were won by some guy named Henry Louis Aaron. 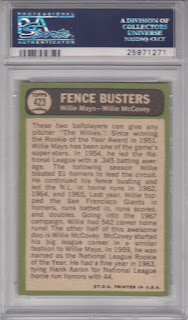 Between the two of them, they won two National League Rookie of the Year Awards, three National League MVP Awards, and a variety of other awards.  To top things off... both were first ballot hall of famers.  Just about the only thing these two didn't accomplish was bring home a World Series title to San Francisco Giants fans.

Anyways... getting back to the card.  I've seen it on a few blogs before and have always thought it was cool.  But it wasn't until I read Henry's post about his best cards for each National League West team back in mid-June that I decided to finally pick up my very own copy.  I kinda feel like it's some sort of Bay Area native card collector's rite of passage or something.

Alright fellow collectors... here is your question of the day:

What is your favorite home run hitting tandem that you've had the pleasure of watching in person or on television?

You know I've gotta go with The Bash Brothers: 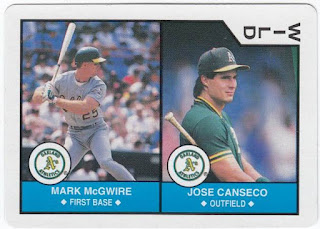