It's Getting Kinda Hectic

It all starts with work.  The arrival of a new school year typically means memorizing 160 to 175 new names, establishing rules and expectations, and helping students transition from having one sixth grade teacher to six seventh grade teachers.

This year there are two additional factors which are making my head spin.  Our school has adopted a homeroom (zero period), which involves a tad bit more planning.  On top of that I'm teaching a new class with very little curriculum handed to me.  So I've been working hard to develop both short term and long term lesson plans for this class.  It's not the first time I've developed curriculum, so the job will get completed.  It's just a lot of work at the front end.

Anyways... I'm not looking for sympathy.  I'm just giving all of you a heads up that my blog posts will probably be shorter in length for the next month or so which may or may not be a good thing for my readers.

There's also been a delay with all of the care packages I owe.  My COMC order didn't arrive until early this week.  For a few years now, my tradebait has been depleted... so I rely on sites like COMC to help me find things for you guys.  I had hoped to have it in my hands during my summer break, but it didn't work out that way.

I'm not exactly sure when they'll go out... but I'm gonna bust my butt to make it happen sooner... than later.

Okay now that I've updated you all with what's going on in my life... let's get to a care package sent to me by Jeremy over at Topps Cards That Never Were.  He hooked me up with a really, really, really nice card for my Buster Posey collection: 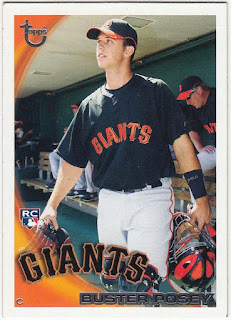 At first glance, this just looks like Buster's base card rookie.  However in the upper lefthand corner, you'll notice the old school Topps logo.  And when you turn the card over, you'll see the vintage card stock: 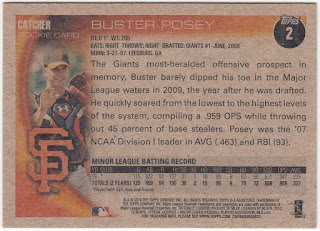 Now I don't really have a Buster PC, but he's a Bay Area legend... which means that I enjoy picking up singles of his every now and then.  A few years ago, I started targeting his different rookie cards and this is one of the ones I really, really, really wanted.

He also sent me this Buster:

I love my MLB logos, but I've gotta admit this card is awesome.  Last year, I commented on at least two or three blogs about the eye appeal of this card.

I'll wrap things up with a pair of customs created by Jeremy: 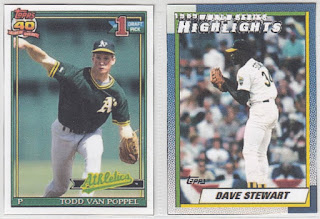 If you're not familiar with Jeremy's blog, he's another card blogger with excellent custom card making skills.

Todd Van Poppel made his MLB debut on September 11, 1991... so he missed being included in the 1991 Topps set.  That was his lone appearance of the season and he got knocked around quite a bit by the Chicago White Sox.  But before Dan Pasqua and Carlton Fisk got to him in the top of the 4th inning... he actually pitched really well.  He struck out five of the first six batters he faced.  Frank Thomas, Robin Ventura, and the aforementioned Fisk were three of those guys.  Not too shabby, right?

As for the Dave Stewart custom... it highlights his 1989 World Series accomplishments... where he took home the MVP Award.  Stew is one of those guys that doesn't get a lot of recognition... but did you know that he's the last MLB pitcher to win 20 games in four consecutive seasons?  Like Buster, he's another Bay Area legend.

Thank you Jeremy for the care package!  As soon as I build these care packages, I'll make sure to include one for you.  The good news is I don't know a lot of Tampa Bay Rays fans, so I should have something to send your way without having to head over to COMC.


In regards to work or personal life, is there a busy time of the year for you?  If so, when?