A Few of My Favorite Things: The 90's

In fact, I loved the hobby so much... I started the decade working at one card shop... and finished it working at another card shop.  Those were the good old days.

And that's what this post is going to focus on.  It's the fifth installment in my Blog Bat-Around series that features A Few of My Favorite Things.  This particular BBA was started by The Collector a little more than a month ago.  With music, movies, and sports cards being such a big part of my life, I knew I had to participate.  To keep posts to a reasonable length, I broke it down into decades.  If you'd like to see A Few of My Favorite Things from other decades, feel free to click the links below:

And without further ado, here are A Few of My Favorite Things from the 90's... 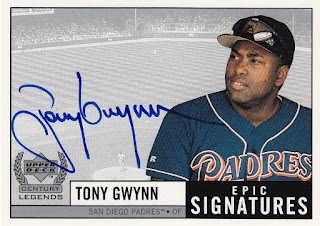 Autographs are one of my favorite things to collect... and the 1999 UD Century Legends Epic Signatures are one of my favorite autograph sets ever produced.  Upper Deck's design team did a great job of using a black and white image of Tigers Stadium in the background with a large portrait of the player off to the right.  Then they had the players sign the cards on top of left field.  The blue Sharpie really allows the signature to stand out.

Over the years, I've managed to collect twenty-three of the thirty cards on the checklist:

Unfortunately the final seven cards are pretty expensive.  When any of them actually pop up on eBay (and it's not often), they typically sell for triple digits...  which means that I probably won't ever complete this set.  But it's okay.  I accepted this fact years ago and appreciate the twenty-three that I actually own. 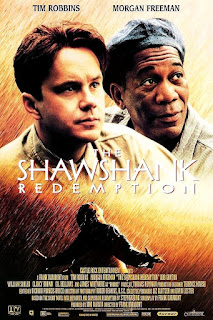 The 90's were loaded with awesome movies.  I've never actually compiled a list of favorite movies, but if I did I'd estimate that 30 to 40% would come from this decade.  Here are just a few of my favorites off the top of my head:  Braveheart, Last of the Mohicans, Clerks, Pulp Fiction, Reservoir Dogs, Trainspotting, Fight Club, The Big Lebowski, Saving Private Ryan, Terminator 2, Fargo, Forrest Gump, The Silence of the Lambs, Seven, Good Fellas, and Casino are all awesome films.  And if I went and looked at all of my DVD's, I'm sure I could name a few more.

I eventually narrowed the list down to five movies, but ultimately I went with The Shawshank Redemption.  I watched it for probably the tenth time a few weeks ago and enjoyed it as much as the first time I saw it.


The Beastie Boys are my favorite group.  They have been ever since 1992 when they released their third mainstream album, Check Your Head, which took their hip hop style and meshed it with their punk roots.  The result was amazing.

The song that originally caught my attention was So What'cha Want.  This was the first song that popped into my head when I originally started drafting these BBA posts.

Well that's it for today.  I'm way behind schedule.  Normally, I like publishing my weekday posts at 3pm PST, but it's already 3:40pm and I haven't even edited it.  I'm gonna cross my fingers and shoot for 4.


Do you have scheduled times for publishing posts?  Or do you just click publish as soon as you're finished writing?

Happy Tuesday and sayonara!
Posted by Fuji at 4:00 PM