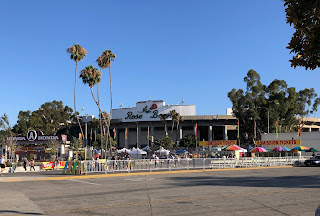 On Sunday my buddy Mike and I headed over to the Rose Bowl Stadium in Pasadena which claims to be the greatest flea market on earth.

If you're wondering what I usually pay, here's a list of fees for my local flea markets:

Now to be fair... we could have waited until after 9am when admission drops down to $9 and there's supposedly a bunch of free parking there.  However since we were new to this flea market, we sucked it up and paid for premium parking.

Okay... let's get to the shopping.

The flea market is organized into sections: arts and crafts, new merchandise, antiques and collectibles, and vintage clothing.  Originally, we planned on walking around the entire place to get our money's worth.  However about halfway through we remembered that there was another flea market that we had success at back in 2014, so we decided to cut out early and only walk around the antiques and collectibles section. 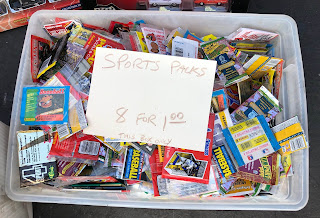 There were a few guys who had sports cards, but only one had decent deals.  I'm not sure if he owned a card shop in the 90's or bought a storage unit, but his stuff was priced to sell. 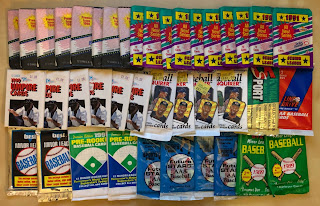 I ended up pulling 40 packs out of this bin.  As you can see from the photo there was a bunch of oddball issues.  I ended up targeting Pacific Senior League and Best minor league packs with some umpire trading cards and Baseball Enquirer packs to round things out. 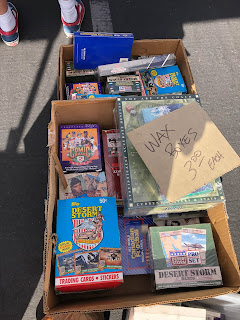 If you like cheap wax, then you might appreciate his three dollar wax boxes.  The selection was pretty limited, but these two boxes caught my eye: 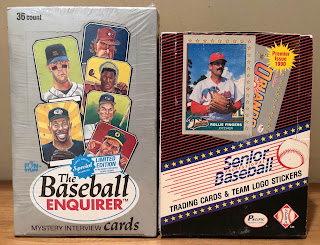 Okay... so I'm sure most of you are shaking your head at The Baseball Enquirer box... but believe it or not, I've always wanted to build this set.  As for the 1990 Pacific Senior Baseball cards... there's one card I'm hoping to find.  If I end up pulling it, I promise to write about it in the future. 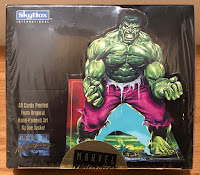 Another vendor had a few random non-sports packs and boxes.  This one definitely caught my attention.

If I had to pick my best deal of the road trip, it would come down to either this box or the 70's Topps cards I purchased at the Coin Depot.  Now if you're not familiar with Marvel cards, then this box looks like any ordinary 90's Marvel trading card set.  But this happens to be one of the most popular comic book trading card sets from that era.

A quick check on eBay reveals that people pay anywhere between $80 to $110 for sealed boxes.  I don't normally flip things for a profit, but there's a good chance that I'll throw this box up on eBay one of these days to help cover the cost of admission and parking. 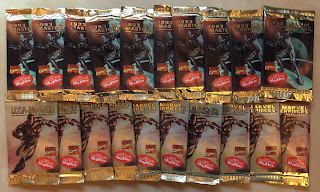 In addition to the box, I also grabbed these packs.  He was asking 50¢ each, but I offered him $7 for the twenty packs and he accepted.  These are not as popular as the 1992 product, so I'll probably eventually open these up and build the set.

I don't remember seeing anymore vendors with cards after this purchase... and within thirty minutes we were back in the car headed to the Saugus Speedway Flea Market.  Unfortunately... neither of us found anything to purchase there.

The final stop of the road trip was at Harris Ranch.  Can't remember what Mike ordered... but I had a fat juicy ribeye steak with a twice baked potato... which was the first solid food I had eaten all day and quite possibly one of the best purchases of the trip (outside of the first bean and cheese burrito at Del Taco).  Did it make up for the Rose Bowl Swap Meet admission and parking fees?  Nah.  But overall... I'd say that the road trip was a success.  Memories don't always come cheap.


Would you be willing to pay $18 to get into a flea market with no guarantees you'd find anything to buy?

Okay... my students arrive tomorrow and I've gotta bring my "A" game.  That means I need to get some rest.  Hope all of you have a great week.