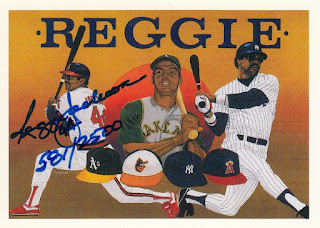 As many of you know, I'm a huge fan of collecting autographs... especially when they're of the on-card, pack pulled variety.  And that's where Upper Deck comes into play.  In 1990, they randomly inserted 2,500 Reggie Jackson autographs into their High # Series baseball packs and became pioneers in the autographed sports card market.

Although I haven't been persistent about tracking down one of these autographs, it has definitely been one of those cards I've wanted for years.  Awhile back I finally added it to my saved eBay searches and have seen them sell in the $150 to $170 range with a few outliers here and there.

A few weeks ago, one popped up with a BIN price of $140 (free shipping) and I made the decision to finally cross this baby off of my wantlist.

The transaction took place in the 90's, so I don't have a record of what I gave up for this 25¢ card with some black Sharpie scribbled on it.  My best guess is that it involved a bunch of popular rookies and inserts from the mid 90's... which still makes me feel ill.

Anyways... even if the signature did look good... you can tell that this card wasn't a pack pulled signature by looking at the hologram on the back.

Upper Deck was smart.  They differentiated the regular inserts from the signed inserts by producing two different holograms.  In the case of the Aaron, the base insert hologram was shaped like home plate (see photo above)... whereas the pack pulled autographs featured a diamond shaped hologram:

It's one of the worst hobby mistakes I've made... right up there with trading my 1952 Topps Andy Pafko for a 1987 Fleer Tin set.  On the bright side, it taught me a lesson... which leads me back to the Reggie.

Hopefully this helps out anyone out there who is considering purchasing one of these Heroes autographs.  It looks like the hologram rule applies to the 1991 Nolan Ryan, 1992 Ted Williams, 1992 Bench and Morgan, and 1994 Mickey Mantle Heroes autographs as well.

Okay getting back the Jackson:

I'm sure some of you have noticed that the card is hand numbered out of 2,500.  These days a card numbered that high would be probably be considered excessive to many collectors.  But back in the Junk Wax Era... especially in 1990... 2,500 was pretty rare.

One collector over on Beckett Forums estimated the odds of pulling a Reggie autograph were 1:148 boxes: 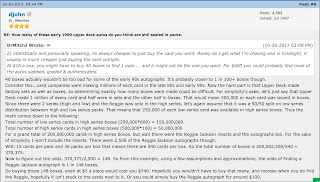 Now obviously that's just one collector's calculations.  Who knows if he's accurate or not, but I can tell you this.  I worked at a card shop back then and I never saw one of these come through our shop, nor did I hear about anyone pulling one. 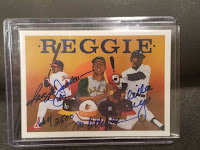 Well that's it for today.  I'll leave you with a quick look at the complete 1990 Upper Deck Reggie Jackson Heroes set:

And here is today's question of the day:

What's one of the worst hobby mistakes you've ever made?