As I wrapped up my summer vacation, I attempted to hit as many flea markets as I possibly could.  The result was three flea markets within four days.

Normally I'd write three separate posts, but in an effort to streamline things... today I'm going to combine them into one.  And since a box of football cards isn't going to attract readers, this post isn't going to be in chronological order.  It'll be listed in a way that helps the post flow.

This was my final purchase... and easily my favorite purchase.  All four of these are of the commemorative variety.  Starting from left to right:  Baseball HOF, 1994 World Series, Black and Gold, and Gold Glove Award.  The boxes are a little beat up... and the World Series ball is starting to show age spots, but for a buck each... I'm not going to complain. 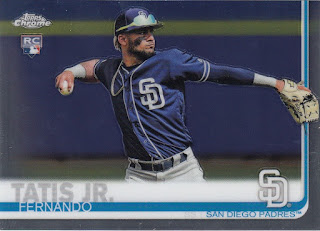 I've made it pretty clear that I'm going to chase down as many affordable Tatis rookie cards as I can.  I picked this one up from my buddy Tony... as well as the cards from the next two purchases.

Found both of these in one of Tony's dollar bins and hooked me with a two for one deal.  By now I'm sure you've seen Laureano's arm.  But back in July he was killing it at the plate too.  Then he suffered a shin injury that has kept him out since then. 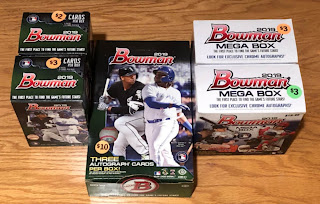 My final purchase off of Tony were these five boxes of 2019 Bowman.  He had gone through and pulled all of the Tatis and Guerreros... but that's okay. 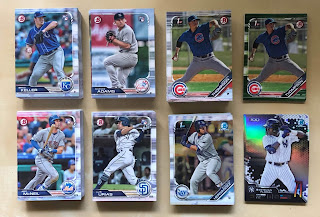 I was looking for the 1st Bowman and 1st Bowman Chrome cards which will be put away for a few years until these guys develop.


Freebie #1:  A Rookie Card and a Buyback

Yuli didn't make his MLB debut until his early 30's.  Trammell didn't get the call to the hall until he turned 60, but I can live with that...when both of these cards are free.  Tony threw these two cards into my Bowman boxes as a friendly bonus. 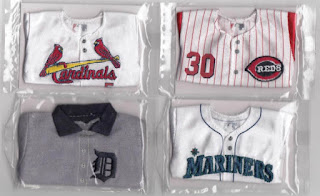 When I came back into the hobby in 2008, I remember seeing these and thinking they're pretty cool.  Haven't seen these pop up too many times over the years, but a guy at the Branham High School Flea Market had a box with fifteen to twenty.  Being sealed, it's hard to tell whose jersey is who, so I picked out the four I could identify for sure:  Albert Pujols, Ken Griffey Jr., Ty Cobb, and Ichiro Suzuki.

The vendor is the same guy who sold me the shoebox collection a few weeks ago.  This time around he had another cheap box of cards... 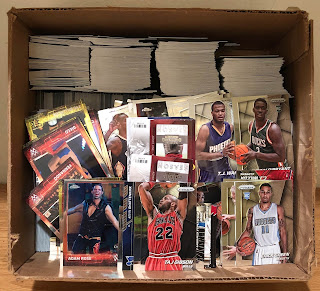 Yeah, it contains basketball, football, wrestling, and soccer.  But I just can't help digging for treasure... especially when it's only three bucks.  Worst case scenario, I'll take these in to my classroom or pass them along to SumoMenkoMan.

I'm pretty sure I already have one of these, but for five bucks I couldn't pass up the opportunity to add another one.  Unfortunately when I got home, I noticed a puncture mark near Devon White's right arm on the box.  Not exactly sure if it is deep enough to damage the cards in the set.

Okay... are you ready for some football? 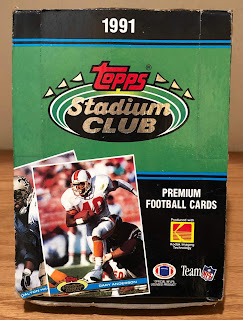 I found this at the Capitol Flea Market for $15 and was stoked.  I remember when packs of this stuff routinely sold for $5 and boxes were selling for over $100.  Collectors were going crazy... hunting for the Favre rookie card.  These days boxes only sell in the $25 to $50 range.  $15 wasn't as big as a deal as I originally thought, but maybe I'll get lucky and pull a Favre. 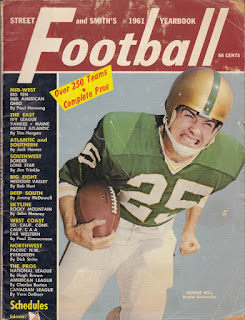 I enjoy reading old sports magazines.  I have no idea who Ronnie Bull is... but for a quarter I figured I'd get the chance to find out. 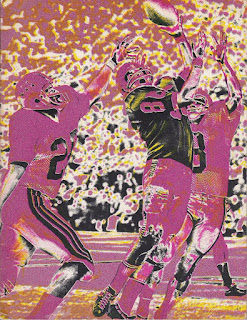 And I'll wrap things up with another flea market freebie.  This time this item was given to me by a complete stranger.  My buddy and I walked up to this couple who looked like they were cleaning out their garage (my favorite kind of vendor).  They had lots of magazines, books, and other paper goods with the exception of trading cards.

I found this book which recaps the 1971 Rose Bowl.  The lady asked if I knew who Jim Plunkett was and I told her that I enjoy collecting his memorabilia.  She told me that Plunkett personally gave her a case of these books a few years ago.  I guess they had been sitting in his house and he got tired of storing them.  Anyways... she said I could take it since I was a fan.

Well there you have it.  My last flea market haul of the summer.  Now that autumn is just around the corner, I'm not sure when I'll be back out to the Capitol Flea Market.  I usually go there on Sundays... but football season is about to start up.  The De Anza Flea Market is back in two weekends.  I'll probably go out there as long as it isn't too hot and I'll still attend the Branham Flea Market on a monthly basis too.  Both of those flea markets take place on Saturdays.


Are you a football fan?  Do you reserve your Sundays for football?  Which team(s) do you root for?

Hope you guys are enjoying your week.  Happy Tuesday and sayonara!
Posted by Fuji at 3:00 PM