Outside of reading a few blogs, I haven really had the opportunity to do anything card related the past few days.  Last week was the end of the third quarter, so I graded projects and worked on grades.

Then over the weekend, I flew down to Las Vegas and hung out with Papa Fuji.  We did a little cleaning since he's going to have people over in a few weeks after my mother's services.  In between cutting up boxes, tossing old lumber, running errands, cleaning, and installing a new toilet seat in the guest bathroom... we ate a lot of food, played a few video slots, and shared memories of my mother.

When I came home, I decided to clear out my scan folder and write up this set review that was originally planned a few months ago.  Last November, I found a complete 1997 Stadium Club Member's Only set at the De Anza Flea Market and snatched it up for $30.

One of the insert sets sitting in the binder is called Pure Gold and since my mom loved wearing gold and has been weighing heavily on my mind lately, I figured I'd dedicate this post to her.

There are two versions of this set.  One of them was inserted into into Series 1 and 2 packs at a rate of 1:72 packs (8 card packs) and 1:36 packs (13 card packs).  The other version is the one we'll be looking at today.  It was offered to Topps Stadium Club members as part of a complete factory set.

Both versions look identical on the front: 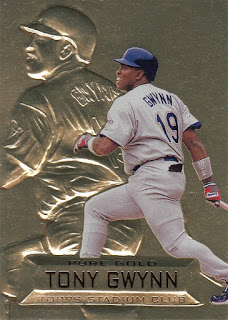 There's a colored action shot with a larger image embossed on gold foilboard in the background.  There's also an embossed gold bar that says Topps Stadium Club, Pure Gold, and the player's name.  When I first saw these inserts, I immediately thought of the 1995 Fleer Ultra Gold Medallion football and basketball parallels.

The difference between the regular set and the Member's Only set resides on the card's back: 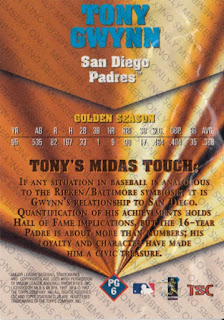 If you look carefully, you'll see the words Member's Only running diagonally on my copy.  The pack version doesn't have these words.  Other than that, the cards are exactly the same.

Topps chose one season for each player in the set to highlight and labeled it their GOLDEN SEASON.  They also wrote a brief writeup which they titled the player's MIDAS TOUCH.

The set's checklist is composed of twenty of the game's best and most popular hitters from fifteen different teams: 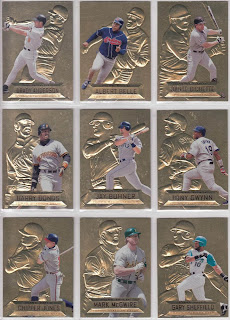 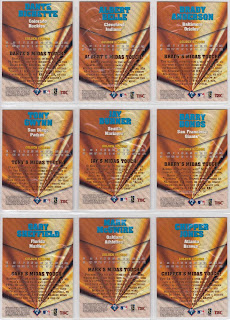 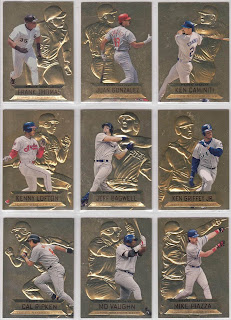 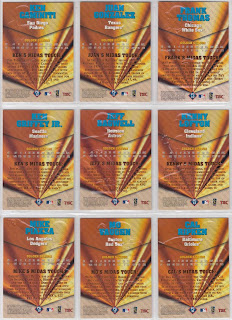 As of today, only seven of the players in this set have been inducted into Cooperstown:  Tony Gwynn, Chipper Jones, Frank Thomas, Jeff Bagwell, Ken Griffey Jr., Cal Ripken Jr., and Mike Piazza.  However, Jeter will get in next year and I'm assuming it's only a matter of time before Bonds does too.

Well I'm off to try and clear out a few more baseball card images that have been cluttering my scan folder.