When it comes to this hobby... I'm one of those collectors who enjoys owning a little bit of everything.


Variety is truly the spice of life.

And that's exactly what Ryan (over at Japanese Sumo Wrestling Cards and Menko) puts into his care packages each and every time he sends me one.

First up were these two books:  Men At Work and Sumo Watching: 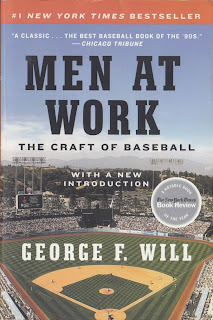 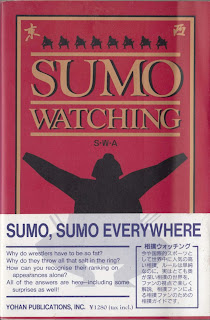 I realize teachers are always encouraging their students to read, but I'm lucky if I read two, maybe three books a year.  That being said... I will definitely be reading Sumo Watching.  It looks like it does a great job of breaking down the sport, plus it has illustrations.  I love books with illustrations.

And according to Ryan's note, Men at Work mentions Tony Gwynn on a few occasions, so I'll be looking into this book as well.

Next up are a bunch of packs for my unopened pack collection: 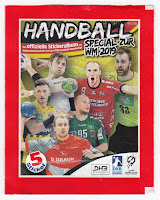 One of these days, I'll get around to scanning my entire collection of unopened packs.  The majority are either non-sports or Japanese sports... and a decent percentage of them were from Ryan over the years.

He also included some packs that I intend on opening up: 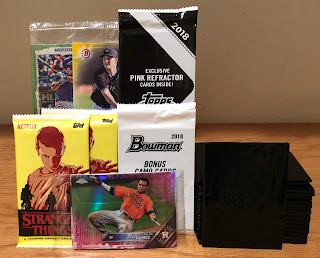 Stay tuned.  I'm hoping I'll have some free time this weekend to sit down and enjoy these Topps/Bowman parallel packs.  Plus I'm still looking for some singles for my Stranger Things insert sets.  The black packs on the right are 1993 Topps Coca-Cola Commanders of the Hill packs.

At the end of March, Ryan wrote a review on this product over on APTBNL and I immediately went out and bought some.  The seller accidentally shipped me the wrong items, but thankfully I have these to hold me over.  I'll definitely do a Set Spotlight post on these eventually.

In addition to unopened packs, Ryan included some boxes for me to sift through: 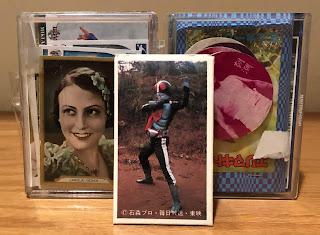 I've already taken a peek... and decided to take a closer look in a future post.  Possibly by next weekend?

And rounding out the benevolent and bountiful box of variety are Ryan's trademark snacks: 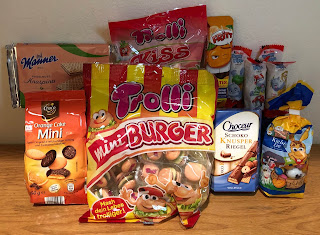 I opened the box last night and the package of orange mini cakes (on the left) has already been devoured and I'm almost halfway through the jellybean eggs (on the right).  But that's not it.  He also through in seven Ritter Sport chocolate bars: 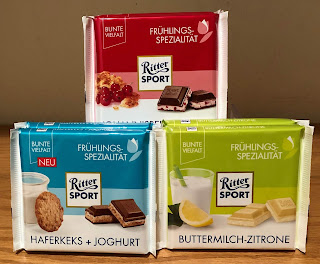 These will test my self-control.  I've been sort of binge eating as of late... and according to my Fitbit, I've gained four pounds in the last month.  I can't afford to gain anymore weight, but don't worry Ryan.  These treats will not go to waste.  I'll be sure to spread them over the next month or two... as well as let my friends and family sample these delicious snacks.

Thank you so much for this big box of goodies.  There are plenty of items in here for me to turn to whenever I need a break from reality.  I do have one really cool card set aside for you.  Plus I owe you a prize package as well.  But it looks like I'll need to go on a little COMC shopping spree to even things up between us.