A few hours ago, I was sitting at McCarran International Airport waiting for my flight back to San Jose playing one of those mindless games on my phone to pass time.  A little bit after I arrived, a small family walked up and sat in front of me.  The son and father were talking about WrestleMania which reminded me that it was taking place sometime this afternoon.

It's been almost two decades since I actively followed wrestling.  Back then The Rock and Stone Cold Steve Austin were still kings of the ring.  And even then, I wasn't a diehard wrestling fan.  I watched it because my students watched it, so I wanted to be able to relate to them.  It's the same reason I binge watched Stranger Things a few years ago and know about the current drama Nikki Minaj and Cardi B.

Anyways... getting back to wrestling... there was a time when I was fully invested in watching the sport.  Back then, Hulk Hogan was a real American, Andre Giant was the 8th Wonder of the World, and the WWE was still known as the WWF.

I supported a bunch of wrestlers, but none more loyally than Ricky "The Dragon" Steamboat.  I can still remember his feuds with Jake "The Snake" Roberts and "Macho Man" Randy Savage back in the mid to late 80's.

Twenty-plus years later, I decided to start putting together a little collection of his cards.  It's relatively small, but I'm not ready to dive head first into a collection featuring a retired athlete in a sport I don't even follow anymore. 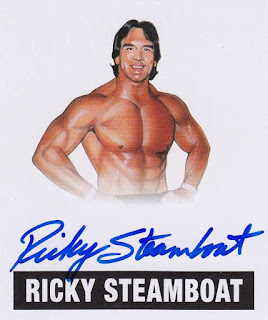 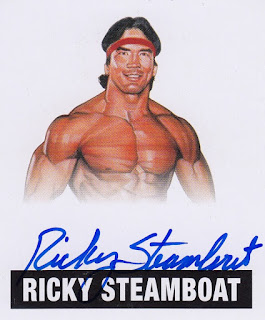 These are my most recent additions to the Steamboat PC.  It's nice to finally see him appear in autograph sets on a more frequent basis. 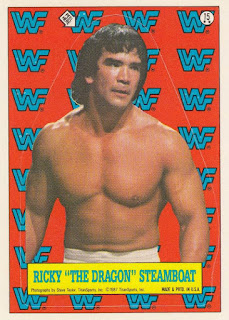 Topps stickers from the 70's and 80's are awesome and this is a perfect example.

Two weeks ago, I wrote about my interest in graded cards.  One of the four reasons I purchase them involves cards that are too cheap to pass up. 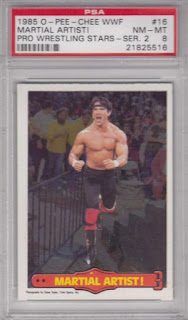 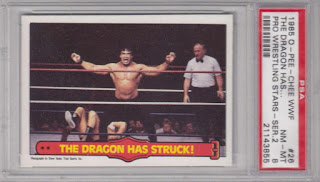 These two slabbed cards were on sale over at 4 Sharp Corners for $1.73 each, so I grabbed them. 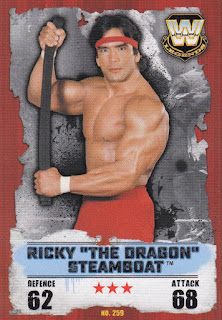 This card was generously donated to my collection by Chris over at The Raz Card Blog back in March of 2017. 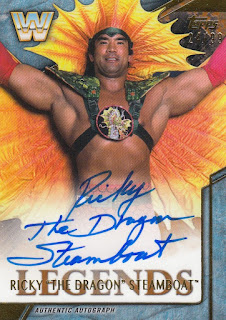 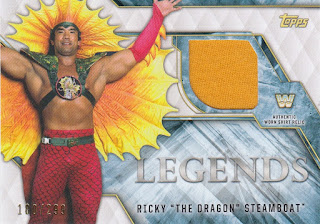 I picked up these two cards when they came out a few years ago over on COMC.  According to my records, I spent $21.57 on the pair, which officially makes these cards the most expensive additions to this collection. 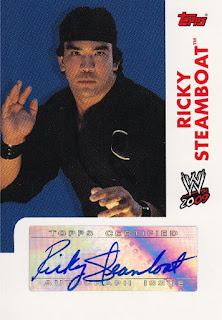 This was the first autograph of Steamboat I ever owned, which was purchased at an online card shop that closed its doors a few years ago.  I happily paid $10 for this card.  Back then, stickers didn't bother me as much as they do now.

And rounding out this post is the only figure I own of Steamboat: 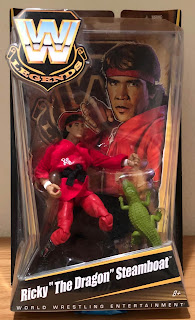 This figure has been collecting dust in my office for eight years.  I purchased it back in 2011 for $7.99 (+ $5 shipping) on eBay.  I checked out recent sales on this figure and they go for $40 to $60.  Maybe I should have collected wrestling figures instead of cards.


Were you ever a fan of professional wrestling?  If so, who was your favorite wrestler?


Well that wraps up today's post.  I apologize for falling behind on posts this past week.  I have a few things scheduled this week, but then the following week I'll be dealing with my mom's services and catching up with family.  After that... I should slowly work my way back into reading everyone's posts, writing my posts, and shipping out the prize packages I've owed people from February and March.  I appreciate everyone's patience.

Happy WrestleMania Day and sayonara!
Posted by Fuji at 4:00 PM