When it comes shopping online for trading cards, eBay is my website of choice.  COMC would be a close second.  And Sportlots would be a very distant third.  Beckett Marketplace?  Well... let's just say that off the top of my head, I can only remember making two purchases from there and both revolve around the card featured in today's post.

Last summer, I was watching a YouTube video with a guy showing off his newly purchased certified, pack pulled, on-card autograph of Barry Bonds.  The price?  $40.  The place?  Beckett Marketplace.

As a guy who has been trying to add as many affordable Bonds signatures to my collection, $40 seemed too good to be true.  So I immediately went over to the site when lo and behold, the card popped up at the exact same price the YouTuber stated.

It features a beautiful die-cut design that's once upon a time was very popular among collectors and I couldn't add it to my cart fast enough.  About a week later, this card arrived: 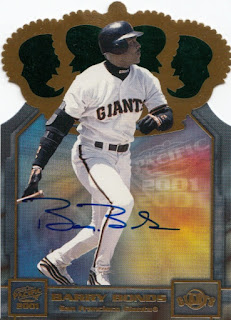 Now $40 to some collectors may seem like a ridiculous amount of money to spend on a single card, but to me it was an insane, once-in-a-lifetime bargain. 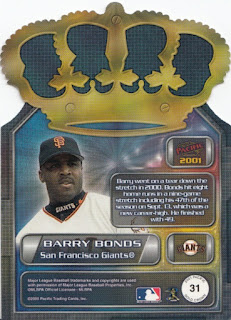 The one downside to this card is that Pacific failed to add a COA to the back of these autographs, so to a random collector this might look like a card that was signed in person or through the mail.  However if you look carefully, you'll notice that in between the gold foil in the crown (on the front of the card) is green foil.  The regular base cards feature red foil, not green, and were pretty tough to pull.  Collectors would find one of the red foil cards in every other box of 2001 Pacific Baseball. 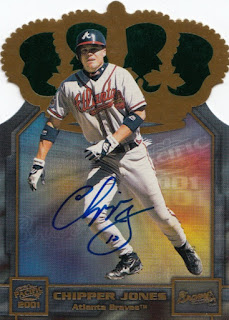 There were only six different green foil cards produced for this autograph set:  Chipper Jones, Corey Patterson, Frank Thomas, Gary Sheffield, Jim Edmonds, and Barry Bonds.  There aren't any published pack odds for these autographs, but I'm gonna guess that they were much harder to pull than the non-autographed versions.

After I received my autograph, I immediately headed back over to Beckett Marketplace and purchased a few more.  Normally, I don't buy cards for investment purposes, but these were just too cheap to pass up.

Have you purchased any cards for investment purposes only, because it was way too good of a deal to pass up?  If so, anything recently?

Well that's all I have for you today.  I hope you're having a good week.