Love them or not, damaged cards are part of our hobby.  You can either choose to toss them out or embrace them.  Depending on the damaged card, I prefer to choose the latter.

A few years ago, I decide to dedicate a binder on my shelf for damaged cards that I had sitting within my collection.  Some were acquired through purchases.  Others were pulled in packs.  And some were part of trades.

Unfortunately if I decided to keep every damaged card I stumbled across, I'd need a 5,000ct. box.  That's why I'm pretty picky about which cards I keep in the Damaged Card PC.  I'm even pickier when it comes to my Damaged Card Hall of Fame.

Up until a few weeks ago, there were only four members of the exclusive club.  But today, I'm here to show off the newest member of the club, which was donated to me by Dennis over at Too Many Verlanders: 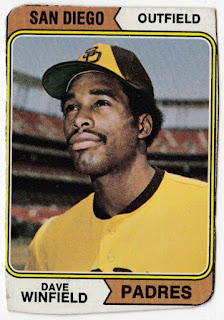 I'm not sure what the story is behind this Dave Winfield rookie card, but it's safe to say that this card was trimmed.  The best part about the card is it looks like a four year old performed the trimming.  I love it! 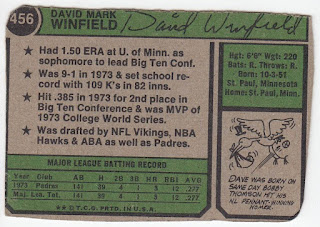 A quick glance at the back and you'll receive a deeper appreciation for this beautifully damaged card. You can see that the person tried hard too keep the upper-left and bottom-right corners rounded.  In addition to the damage, the card back itself contains a plethora of interesting facts.  I'm sure most of us knew that Winfield was a three-sport stud.  But did you know that he was born the same day that Bobby Thompson hit the Shot Heard 'Round the World?  Or that he was a star pitcher at the University of Minnesota?  Did you know that he was the MVP of the 1973 College World Series?

It's pretty amazing the stuff you can learn from the back of a baseball card.

In addition to the Winfield, Dennis also sent me this Byron Leftwich jersey card: 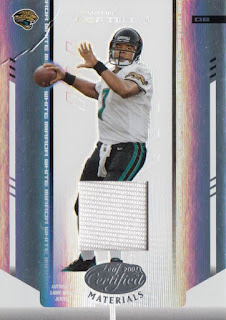 If you look right under the Jaguars' logo, you'll notice a nice, solid crease running through the card.  Yup!  Another addition to my Damaged Card PC.

The rest of the package was filled with mint condition cards that fit other collections.

First up is this 2009 Topps WBC set that includes seven different cards for my Japanese Player PC: 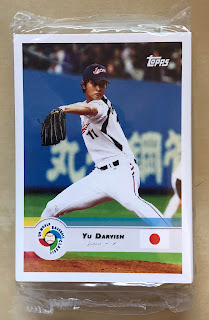 He also sent me this mint condition Hideo Nomo card: 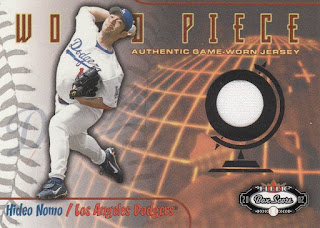 Plus this random assortment of awesomeness... 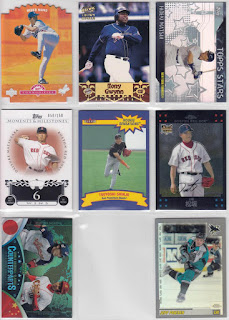 And rounding out the package were some Raiders and 49er cards for my students: 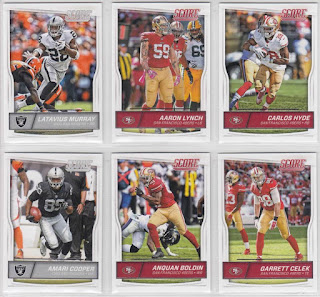 Thanks Dennis!  I already owed you for the January package.  Now I really, really owe you.  I grabbed some stuff for you on COMC a few weeks ago.  I'll send them your way after I start building my care packages (sometime in June).