A New Source for Busting Wax

When it comes to ripping wax, I've gone through several phases over the past forty years.  The first packs I cracked were 1977 Topps Star Wars that were purchased by my mom (Happy Mother's Day Mom!) at a Japanese grocery store called Dobashi Market in San Jose's Japantown.

A few years later Mama Fuji started buying me packs of 1981 Donruss and Topps at the local pharmacy as a treat every now and then.  I guess she figured it was better than buying me candy bars.

Over the next twenty-seven years, money pretty much dictated how I collected.  There were times I only could only afford individual packs, while other times I was into buying full wax boxes.  I even went through a brief period of busting entire hobby cases.

These days, I'll occasionally open a box I purchase from my local wholesaler, DA Cardworld, Blowout Cards, or the local flea market... and of course there are those damn blasters from Target.  But honestly... my love for opening packs and boxes just isn't what it once was.

Then a few weeks ago, I stumbled across this video on Youtube and immediately felt that familiar itch:


I don't expect you to actually watch it... so I'll just summarize it for you.  The guy in the video busts open a monthly subscription box called Collectible Card Club.  For those of you who aren't familiar with monthly subscription boxes, they're essentially mystery boxes that you pay for on a monthly basis.  This particular club focuses on sports cards and gives the customer a few options:

Step 1:  Choose your sport:  baseball, basketball, football, or a mixture of all-sports.

Step 2:  Choose the era of packs:  modern, vintage, or a combination of both.

Step 3:  Choose the program: purchase month to month or buy an annual subscription.

Here are the current rates:

After watching a few more videos on YouTube to get a sense of whether or not this was a legit company, I discovered that Collectible Card Club primarily uses hobby packs.  Set builders might not have a preference between retail and hobby, but as a guy who enjoys pulling "hits", this was the key selling point.

My only concern with these subscription box companies is that they've been known to pack up in the middle of the night and disappear.  The good news is they accept PayPal, so I feel my credit card information is a little more secure.  I should also point out that there are no hidden fees.  What you see is what you pay for.  Shipping and handling fees are included in the price. 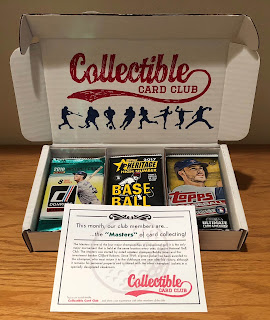 I decided to go with Platinum (month to month) baseball (modern) box for $34.95 and today I'll reveal what I pulled to see if it's something I'd pick up again.

So without further adieu... let's see what's inside the box.

When you first open up the box, you notice that there are three stacks of packs and this note from the company: 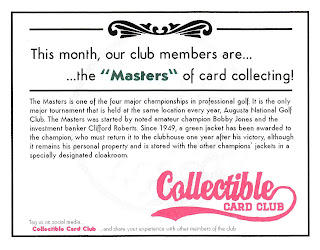 I'm not sure why they're focusing on golf when I chose their baseball subscription box, but it doesn't really matter.  The note is a nice touch, but I really only care about the packs.  Here are the fifteen packs I received: 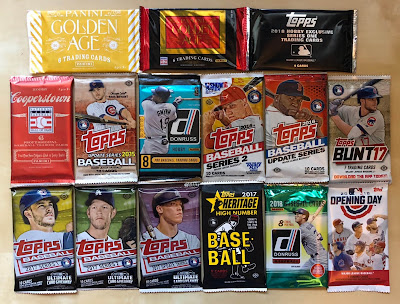 Subscription box reviews really aren't my specialty, so I decided to borrow something I've seen over at The Raz Card Blog.  Christopher subscribes to Loot Locker, which is an alternative to the Collectible Card Club.  He breaks down the value of each pack by dividing the current box prices over on DA Cardworld/Blowout Cards/Steel City Cards by the number of packs to see if he's getting his money's worth.

I applied the same formula and came up with these results:

When you factor in shipping and handling, it's a fair deal.  I've worked at two card shops in my lifetime and we've always charged a premium for individual packs (compared to full box sales), so when you factor that into the formula, the deal gets even better.

Okay... it's time to see what I pulled from the packs.  Regular readers know that there's no way I'm going to scan ever single card.  So here are the highlights... 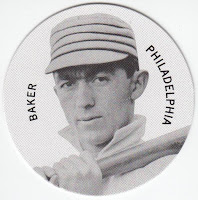 So I decided to scan my favorite card out of each pack.  Obviously favorites are subjective.  Personally, I would have loved to pull an autograph or memorabilia card out of one of these packs.  Instead the nine best cards from the first nine packs were seven insert cards and two parallels.

The 10th pack (2017 Topps Series 2) contained arguably the biggest pull from the box: 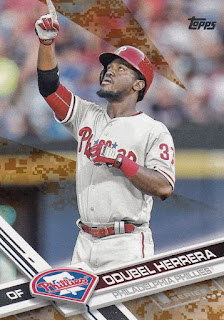 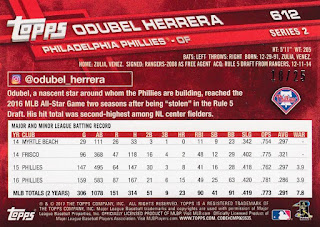 As of this post, Herrera was leading the National League in hitting with a .360 batting average.  He's also reached base safely in forty-one straight games, which is a pretty amazing feat in itself.

Getting back to the packs...

The 2018 Topps Silver pack was valued the highest with collectors paying around $10 per pack.  I was happy to pull this purple refractor of Anthony Rizzo #'d to 75.  He really struggled the first month of the season at the plate, but has had a pretty productive May.

Overall... I didn't pull any hits (autographs or memorabilia cards),which was kind of disappointing.  I had high hopes of pulling at least one hit... since most of these were hobby packs.  But them's the breaks.  Anytime you make the decision to rip wax, you're rolling the dice.

I apologize for not scanning every single card I pulled from the break, but my schedule just didn't allow for that.  With that being said, I was able to pull a combined total of twenty-nine inserts, parallels, variants, or buybacks from these fifteen packs.  Plus a few rookie cards that could potentially have some value if the players pan out.

Would I consider purchasing this subscription box again?  Maybe.  Maybe not.  I obviously didn't come close to pulling $35 worth of cards.  The smarter choice would have been to spend $35 in singles on COMC or eBay.  However you don't scratch the "pack itch" by purchasing singles.

I'll wrap up this post with a list of pro's and con's for this subscription box experience.  I tried to be as unbiased as possible...

Obviously you can't fault the company for using low-end products since that's what fits into the subscription box price point.  However, I felt that it was important to at least point that out.  I'm interested in seeing if they'll include packs of 2018 Archives, Ginter, and Stadium Club later in the year.  If they do, I might give them another shot.

Okay guys and gals... it's your turn to chime in.

Would you be willing to give Collectible Card Club a shot?

Have you ever tried any kind of monthly subscription box before?

I've tried a few different ones:  Loot Crate, Marvel Collector's Corps, and Smuggler's Bounty (Star Wars Funko).  Out of the three, Smuggler's Bounty was the only one I kept for an extended period of time.  However it's been at least a year (maybe 2 or 3) since I've ordered any of these.

Well that's it for today.  Happy Mother's Day and sayonara!

One of my favorite eras for following the Seattle Seahawks was the 80's.  My cousin Keith attended UW and on one of my visits to Seattle, he converted me into a fan.  Within a few years, they were a playoff team with Dave Krieg, Curt Warner, and Steve Largent putting points on the scoreboard, while guys like Kenny Easley, Jacob Green, Eugene Robinson, and Dave Brown were handling business on the defensive side of the ball. 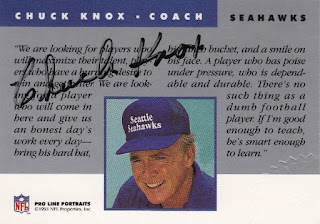 The man at the helm?  Chuck Knox.

This afternoon I read the sad news that he passed away.  Rest in peace Ground Chuck.  Thank you for the memories.  You will be missed.