But without a doubt, eBay is my primary source of cardboard... especially in regards to the money I set aside for my hobby budget.  I've never actually sat down and calculated anything, but I'd guess that 70 to 85% of my monthly budget is spent on eBay.

Some months are worse than others... depending on the deals I find and whether or not eBay offers special promotions.

A while back, eBay was offering up 15 to 20% coupons and 8 to 10x eBay Buck bonuses on a weekly basis.  I took advantage of those deals and ended up with a $38.90 eBay Buck certificate.

I wanted to apply the certificate towards one key addition to my collection, so I targeted the T206 Chief Bender.  Unfortunately nobody accepted my best offers and I kept getting outbid on auctions.  Plus time was starting to run out.  The certificate was set to expire on May 2nd, which meant I had less than a week left.

I widened my eBay searches and eventually found this auction a few hours before it was set to end:

The current bid was less than $30, so I added it to my watch list and set an alarm on my phone.  With only a few seconds left, I entered in a bid and was shocked to see that I won the auction for less than $50.

Now I'm not exactly a Barry Bonds card collecting connoisseur, but I have been targeting his autographs when the price is right.

When you factor in my eBay Buck certificate, I only had to pull $12.35 out of my pocket for this 1999 Topps Autograph of one of the most hated men in baseball who just so happens to also be the all-time home run king: 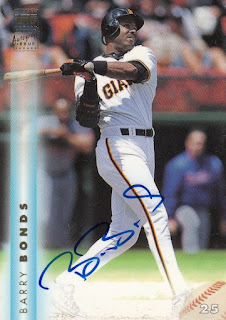 This on-card signature was from an era when most autographs were still pretty tough pulls.  Sure you had products like SP Signature and Donruss Signature that offered one autograph per pack, but those were exceptions to the rule.

In 1999... Topps created a 16 card autograph set that was split into two series.  The first eight cards were inserted into Series 1 packs at a rate of one per 532 hobby packs.  This Bonds was part of the second series cards which were a little easier to pull: one per 501 hobby packs.  That's about one per 14 hobby boxes. 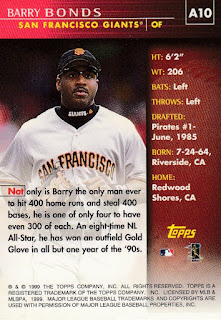 The back of the card points out that Bonds was the only baseball player to hit 400 home runs and steal 400 bases.

Nineteen years later, he's still the only member of that club.  In fact he finished his career with 762 home runs and 514 stolen bases, which obviously makes him the sole member of the 500/500 Club to boot.

I realize this guy isn't going to win a lot of popularity contests, but he was one of the most entertaining baseball players I've ever had the chance to watch and I'm not just talking about his 73 home run season.  Whenever he entered the batter's box, he gave baseball fans a show.

And just in case some of you forgot... he was pretty good defensively too.  Just continue reading the back of this card where it mentions his eight Gold Glove Awards.

Okay... it's time to wrap things up.  Here are today's questions of the day:

What is your primary source of sports cards?

Who is the most exciting athlete you've ever watched in person?