Why aren't there more card shows? 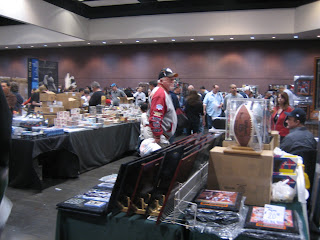 C'mon... join me: More card shows! More card shows! More card shows!
I was amazed at how many people were at the show. Sure... a lot of people were autograph seekers... but every time I walked up to a table there was at least a small crowd of collectors. There were a few tables that I didn't even get to, because each time I tried... it was packed.
It was fairly small... maybe 100 tables (50 vendors)? But it reminded me of the old days... when these shows occurred on a monthly basis. I spent three hours there on Friday night... and added a couple of more on Saturday morning.
Although I didn't see anyone from the forums or YouTube... I did run into an old buddy who I collected with years ago. Anyways... onto the booty!
Purchase #1: Refractor Lot $4 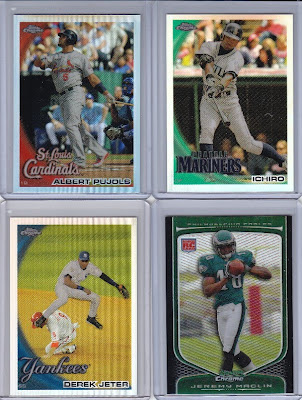 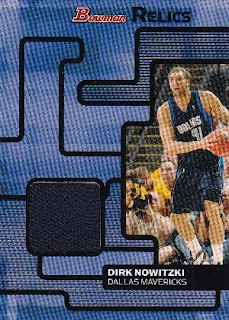 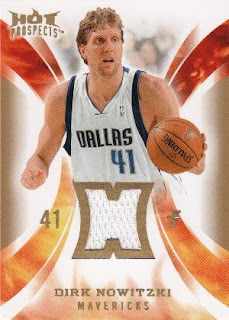 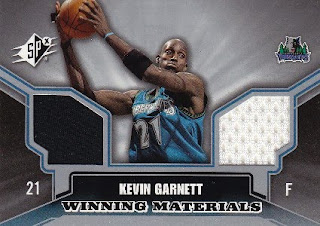 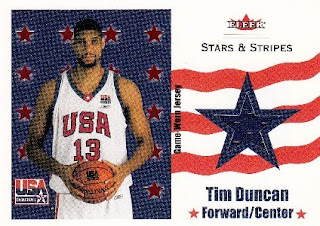 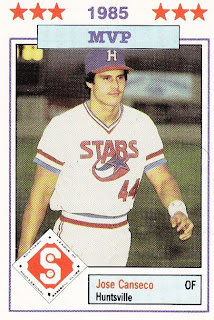 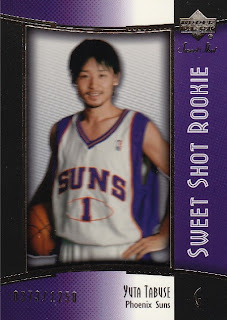 1985 Huntsville Stars Jennings #44 Jose Canseco
2003/04 Sweet Shot #124 Yuta Tabuse RC
I was stoked to find this Canseco minor league card for a buck. Twenty years ago... I couldn't afford this little gem... it's funny how things change. The Yuta Tabuse rookie will also go straight into my PC. Tabuse is the only Japanese player to be drafted by an NBA team. Obviously, he never did anything... but he's still a pretty cool conversation piece.
Purchase #4: 250+ Insert, Refractor, & Rookie Card Lot $13
I spent over two hours sifting through 5,000ct. boxes on Friday and Saturday... building this sweet lot. It was like a blast from the past... since this is what I used to do at card shows over 20 years ago.
The guy was selling singles for $.05 a card... yep that's right... 20 cards for a buck. Sure he had tons of commons... but he also had a ton of 90's inserts, some newer refractors, and a variety of rookies. He also was selling a bunch of cards in top loaders at the same price... so that was a sweet little bonus.
Here are a couple of the nicer finds: 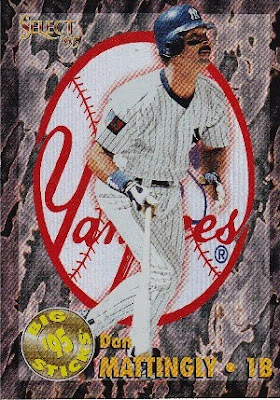 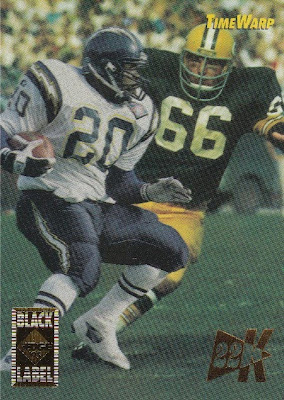 1995 Collector's Edge "Time Warp Black Label 22K Gold"
#3 Ray Nitschke/Natrone Means
And just a few of the other cards I picked up in the lot... 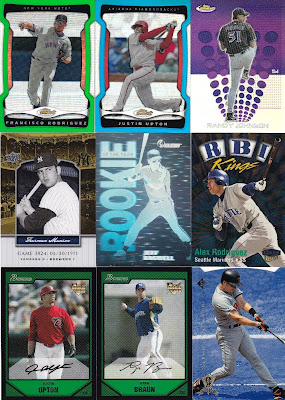 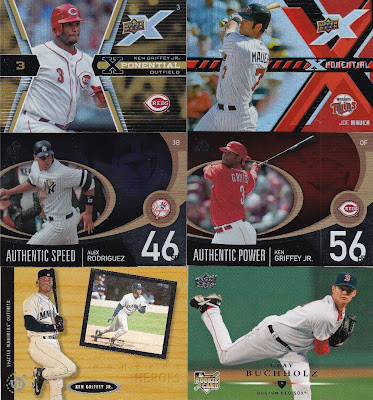 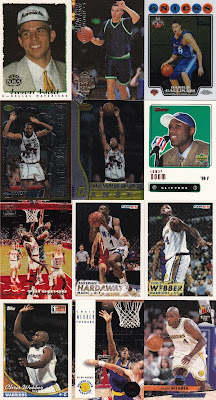 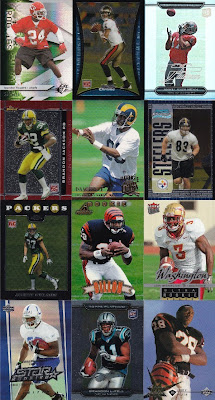 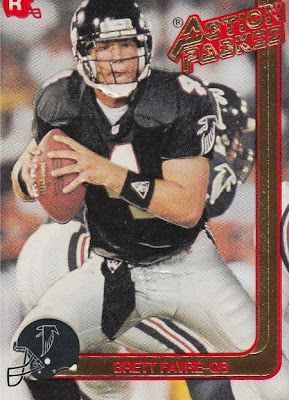 I overpaid for this set... but I bought it from the guy who sold me the singles for 5 cents each... so I figured he hooked me up... I should hook him up. I've always wanted this factory set... because it has the Brett Favre rookie.
Purchase #6: 1977 Topps #177 Steve Largent RC $20 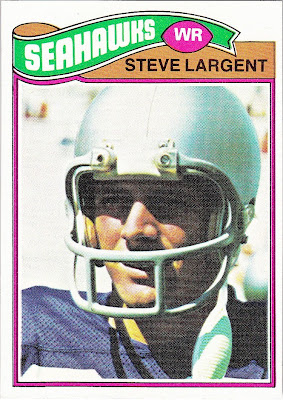 The card was originally graded PSA 8... but I popped it out of its case because it was chipped and scratched. This is by far, my favorite card show purchase. It's the first time I've owned a Largent rookie... and it finally finishes off my Steve Largent Trifecta (I'll try to post it this week).
Sunday's question of the day...
When was the last time you went to card show?
How often are card shows offered in your area?
Living in the Bay Area... it kinda sucks... there aren't many big card shows. There's a couple of major ones... the GT Sports Marketing and the annual Tri Star shows... along with a few mall shows every now and then. I just wish we could go back to the early 90's... when there were several shows each month.
Well... enough whining... it's time to get ready for the big game.
Go Pack Go!
Posted by Fuji at 1:22 PM

I'm pretty sure that in Portland Metro we have one card show a month. And it's probably half the size of the show you went to.

But it's not a dying hobby - it's just a hobby in transition. I go to a card show everytime I log onto ebay. Really, it's a bottom line thing for a lot of vendors.

But card shows are great to break out of some Beckett pricing.

Ha, you got an '04 Finest card this weekend, too! Nice Johnson! (The card, that is.) Looks like you hooked up pretty well, all in all.

I was at a mall card show on Halloween out in Hanover, PA, came across it totally by chance when travelling. Real small, only a few dealers, but a lot of great old stuff there. Before that, it'd been too long, probably 2 years. I keep meaning to hit White Plains, but it hasn't happened yet. Locally, there are a few shows that I should frequent more often, but weekends can be odd for me at times.

The show looked like a lot of fun and you picked up some sweet cards.
I've never been to a card show and there aren't any around here, well at least no sports card shows, I think there are some Magic events and other battle card game type things but nothing I would visit.

I went to a card show today, but it was a sad tiny thing with half a dozen dealers. I spent $35, most of which went for a 2009 Topps sketch card.

Card shows are in my blood so I try to get to them as frequently as possible. You might have to drive a little bit, but you can get to a show just about every weekend in Massachusetts. Some weekends you have multiple shows to choose from.

Times were a lot different them though. Card shows were the best way to fill sets. There wasn't a different $70 product coming out every week so there was more money to be spent on cool things that you could search out at shows. Also, as previously said, it used to be the only way to see a lot of cards at once, but these days the internet allows us to shop giant supermalls of cards and get them cheaper than ever.

Sweet pick-ups! Refractors are almost impossible to resist. I went to a show on Saturday morning but there weren't as many dealers as there usually are due to heavy snowfall the night before (we got around 8 or so inches here). That show along with another show, are both held once a month. So thankfully I have access to regular shows that feature many dealers/collectors that have a wide range of stuff to sell. I see a bit of everything there, boxes, packs singles both vintage and modern, from baseball, football, basketball and hockey. Even some other stuff too like NASCAR and wrestling. Not much memorabilia though, namely just cards.

I don't think I've ever been to a card show. Is there a site that shows the dates and cites of where they are held?

G - No doubt... most of my purchases are from either eBay or COMC... but the thing I enjoyed about the card show was having the opportunity to sift through boxes and talk to other collectors.

Scott Crawford - I'm glad you like checking out my purple Johnson... just don't stare too long or you'll go blind.

I've heard a lot about the White Plains show... if I ever make my way out to the East Coast, I'll definitely have to go to it.

Tony Mc - Bummer... I guess I should stop whining and appreciate what I have. Is there a big enough sports card demand over there?

randombaseballstuff.com - Which sketch card did you pick up? I'd be happy with a weekly card show with 12 dealers :-)

Offy - Damn... you're lucky! Looks like I need to move out to the East Coast. You and I have similar childhoods though... great memories & we both worked at card shops. Oh how times have changed.

Captain Canuck - Lol... I'd even be happy with 6 to 10 dealers... at least you can hang out and talk sports cards... and make connections.

moremonkeys138 - I know right? I see refractors and it's like a magnet... I'm drawn to them.... especially when some of them are 5 cents each. The show I went to had a bunch of memorabilia, but I wasn't into that... I'd be happy if it was just cards.

Kev2380 - You can check the back of Beckett magazines... or check out this link.

I'm sure there are other sites, if you type sports card shows into google.

There is a small demand for sports cards but everything is aimed at kids, there's not anything aimed at the older collector. The biggest cards seem to be Topps Attack EPL cards.
We still don't have 'hits' in our packs either, so no autos and no GU. There are also WWE cards/stickers but not much else.

tony mc - no gu or autos? interesting... i'm not quite sure how i feel about that. i do like how they cater to kids though... that's pretty cool.