So What's the Scenario?

Just a heads up... you'll be seeing a decline in the number of posts here on this blog over the next couple of weeks... possibly longer.  Even though I'm on my summer break, life is far from rest and relaxation.  Back at the start of summer, I didn't want to be bored... so I made sure to keep myself busy and right now I'm in the thick of things.
With that being said... my decision to scale things down on this blog isn't hobby related.  In fact, I'm sitting on tons of material ranging from card show purchases, box breaks, care packages, COMC fodder, and mystery pack purchases from the Online Dime Store.  There's even a Topps Magazine post I'm really looking forward to finishing and publishing eventually.
Unfortunately there just isn't enough time in the day.  And over the past week or so, I've realized that it's hard enough keeping up with my blogger reading list... which right now I'm prioritizing ahead of publishing my own posts.
When can you expect to see a regular three to four posts per week blogging schedule?  Not exactly sure.  The new school year is just around the corner, so we'll see how that impacts my free time.  For now... the goal is to publish at least once a week to keep me on your reading lists.
Okay... let's get to the actual card portion of the post.  On Monday, I wrote about my experience on the other side of the table at a card show and Jafronius left a comment about not picturing a scenario where he would sell a collectible, because he wouldn't buy it... if he didn't want it.
I totally see his point and understand where he's coming from.  In fact, I can't see myself selling most of the cards I've purchased over the years using his exact reasoning.
However it made me brainstorm a few scenarios where I'd be willing to sell something I purchased.  Each of these scenarios were based on my recent card show experience in one way or another...
#1:  One, Two, or Three is Enough 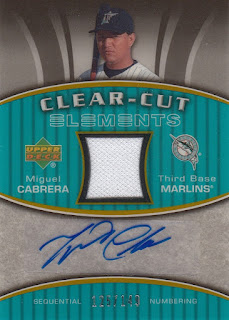 2007 UD Elements Clear Cut Elements #CCE-MC
I purchased this card on eBay back in September of 2010 for $21 (free shipping and tax free), because it was during a period of my life where I was buying up autographs of current superstars.  At the time I didn't mind that this was a sticker-graph.  Did I prefer on-card autographs at the time?  Sure, but I could also live with stickers.
Since then, I've acquired several on-card autographs of Miggy... which made this card expendable.
#2:  Clearing Some Room 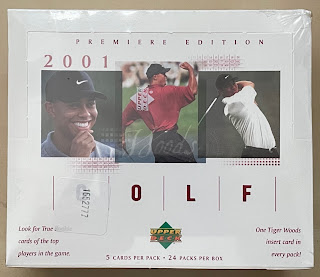 2001 Upper Deck Retail Golf Box
2010 must have been a big year for purchases, because in addition to the Cabrera... I also picked up a 12 box case of golf cards from Pittsburgh Sports Wholesale (now Steel City Collectibles) for $119.95.  I opened up eight of those boxes and built several sets... then tucked away the remaining four boxes for a rainy day.
This isn't a new thing for me.  Over the years I've built a collection of boxes with plans to one day have a box busting party.  But something happened.  People began paying ridiculous prices for unopened product.  This box is a great example.  I sold one box of this stuff on Saturday and the sale nearly covered the cost of the entire case.
But the best part about this sale it freed up some space for new cards for my collection.
#3:  Too Good to Pass Up 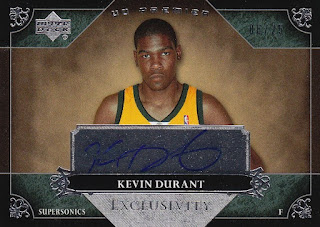 2007-08 UD Premier Exclusivity Autograph #EX-KD
I don't have any online records of where or when I picked this card up... but I will say that there is no way I paid even a tenth of what I sold it for on Saturday.  It was by far the largest sale of the day.  Sometimes a deal is just too good to pass up.
The crazy part about this sale is that I actually sold it for less than the market value.  Had I waited until next season, I could have gotten several hundred dollars more.  However... I sold it at a discounted price to a Kevin Durant collector.  He got a deal.  I got a deal.  It was a win/win situation.
#4:  Opening the Door for Future Bargains 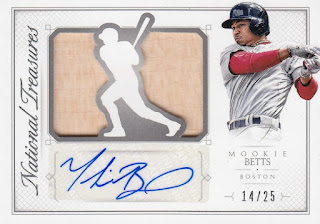 2015 National Treasures Player's Choice Signature Die-Cuts #37
Jafronius doesn't buy things he doesn't want.  That makes sense to me.  Most of the time, I wouldn't either.  However after thinking about it, I did come up with one major exception to this rule: bargains.
One of my favorite online dealers was Jersey Coast Collectibles.  He shut down his website a few years ago, but not before hooking me up with hundreds of awesome bargains.  One of those was this gorgeous Mookie Betts bat relic autograph that I purchased for $14.49.
Now I love Mookie, but the fact is I already have another autograph of his: 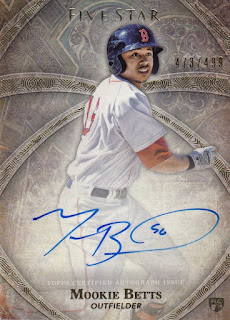 2014 Five Star Autographs #FSA-MBE
This autographed rookie card was purchased the same day as the other Mookie, but for a few more bucks ($17.65).  Do I need two Mookie Betts autographs?  If I was a Red Sox or Dodger fan, maybe.  But I'm not... so the National Treasures card became nonessential.
By the way, I actually didn't sell the bat relic autograph at the show.  I sold it to my buddy on Tuesday when I returned the two display cases he loaned me.
Ultimately... I'm a bargain hunter at heart and when I hit the flea market or occasional card show... I'm always looking for deals even if they don't necessarily fit my collection.  And if the right situation presents itself... I have no problem getting rid of that bargain in exchange for money that will allow me to purchase more bargains down the road.
I'm sure there are other scenarios where I'd be willing to sell something I purchased in the past, but these are the ones that relate to my recent card show experience.
Thank you Jafronius for being the inspiration for the blog post.  That's why I love reading all of the comments people leave on my posts.
Feel free to comment on any of these scenarios or write about your own personal scenarios down below.  Maybe it'll inspire my next blog post.
Happy Thursday and sayonara!
Extra Innings
By the way... here's the song that inspired the title of this post.
Posted by Fuji at 3:00 PM